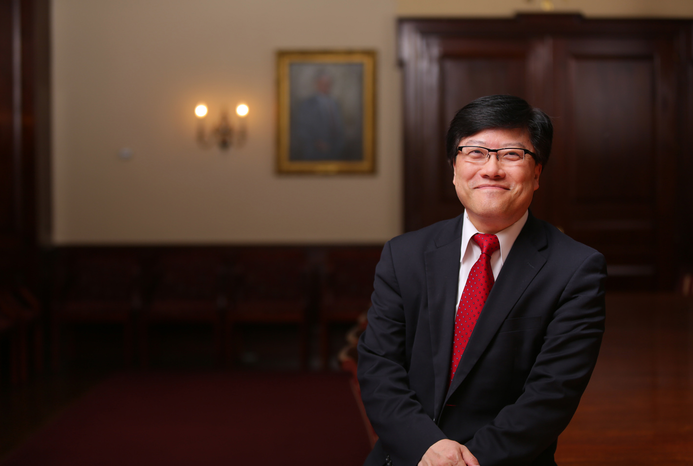 Dr. Augustine M.K. Choi, the Stephen and Suzanne Weiss Dean of Weill Cornell Medicine and provost for medical affairs of Cornell University, has been elected to the National Academy of Medicine (NAM).

As one of the highest honors in the fields of health and medicine, NAM recognizes individuals who have demonstrated outstanding professional achievement and commitment to service. Dr. Choi is among 100 new members elected to the body in 2020, announced Oct. 19 in conjunction with NAM’s annual meeting.

“I am deeply honored to be elected by my peers to the National Academy of Medicine and to join the ranks of such a distinguished group of physicians and scientists,” Dr. Choi said. “The academy’s recognition of my research is truly humbling, and I would like to thank my colleagues and my mentees whose collective efforts have advanced the field of pulmonology. I’m also grateful for the academy’s recognition of my commitment to elevating diversity, equity and mentorship in academic medicine. I look forward to continuing this work and sharing my expertise and service with NAM.”

“Dr. Choi is an exceptionally talented physician, scientist and leader whose contributions to pulmonary and critical care medicine have made a lasting impact on the fields of medicine and science,” said Martha E. Pollack, president of Cornell University. “I congratulate Dr. Choi on his election to the National Academy of Medicine.”

Established in 1970, the National Academy of Medicine is an independent organization that works to address critical issues in health, science, medicine and related policy, and is part of the larger National Academies of Sciences, Engineering and Medicine. New members are elected annually by current members. NAM now counts more than 2,300 active members around the world, including the newly elected members. As part of their election, new members commit to volunteer their service in National Academies activities.

Dr. Augustine M.K. Choi is the Stephen and Suzanne Weiss Dean of Weill Cornell Medicine and provost for medical affairs of Cornell University. An international authority in pulmonary and critical care medicine, Dr. Choi has pioneered research involving the use of gaseous carbon monoxide to treat human diseases, including sepsis and pulmonary fibrosis, as well as non-pulmonary diseases.

In addition to more than 375 publications and multiple National Institutes of Health grants, Dr. Choi has received numerous honors and awards. These include the Ho-Am Prize in Medicine, often referred to as the Korean equivalent of the Nobel Prize, and the 2015 J. Burns Amberson Lecture, which recognizes a career of major lifetime contributions to pulmonary research. He is a member of the American Society of Clinical Investigation and the Association of American Physicians.

A renowned leader in academic medicine, Dr. Choi has elevated diversity and mentorship to pillars of Weill Cornell Medicine’s mission, alongside patient care, research and education. Dr. Choi has launched several programs and initiatives to foster a culture of diversity and inclusion in medicine, which include establishing the Office of Diversity and Inclusion, the Office of Institutional Equity, and Diversity Week, an annual event that showcases cutting-edge research and initiatives focused on enhancing diversity and reducing healthcare disparities at Weill Cornell Medicine and nationwide. Dr. Choi has also built a strong culture of mentorship through initiatives like the institution-wide Mentoring Academy, a JumpStart program to provide financial support and mentorship to early-career scientists, and an annual faculty award to recognize excellence in mentoring.

Dr. Choi is an enthusiastic champion of advancing equity in healthcare and supporting aspiring doctors’ and scientists’ mental health and wellbeing. In 2019, he spearheaded an expansion of Weill Cornell Medicine’s scholarship program to offer debt-free medical education for all students who qualify for financial aid. Dr. Choi also conceptualized and hosted the inaugural National Conference on Medical Student Mental Health and Well-Being, believed to be the first comprehensive, multidisciplinary forum to examine the mental health needs of medical students.