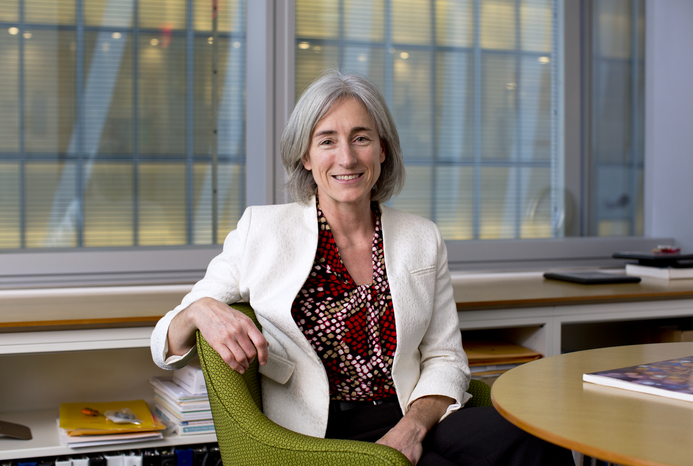 The daughter of two nuclear physicists, Dr. Laura Alonso, was drawn to medicine while earning her undergrad degree in biochemistry from Harvard. She attended the University of Pennsylvania’s Perelman School of Medicine, followed by an internal medicine residency at the University of Chicago and fellowships in endocrinology and metabolism there and at New York University. Last September, she became chief of the Division of Endocrinology, Diabetes, and Metabolism at Weill Cornell Medicine and NewYork-Presbyterian/Weill Cornell Medical Center; she is also director of the Weill Center for Metabolic Health, a field that encompasses not only diabetes and obesity but fatty liver disease, hormone imbalances, thyroid-related issues and more. A physician-scientist specializing in diabetes, Dr. Alonso focuses her research on approaches to replenishing the body’s population of insulin-producing beta cells. She is an advisory board member and has an equity stake in Fairbanks Pharmaceuticals, a biotech startup working toward a diabetes cure through the regeneration of pancreatic beta cells. Recruited as the Herbert J. and Ann L. Siegel Distinguished Professor of Medicine, she came to Weill Cornell Medicine from the University of Massachusetts Medical School in Worcester.

Are cases of diabetes on the rise? Yes, both types are. Type 2 is associated with weight gain, and we’re all aware that obesity has increased tremendously. We also have more children being diagnosed with type 2, which parallels the rise of weight gain in youth and adolescents. That’s a big problem, because recent studies have shown that in young people with type 2, it’s a much more aggressive illness than in older people. And type 1, which can be diagnosed at any age, is increasing for totally unclear reasons. Type 1 is caused by the immune system: the infection-fighting cells that are supposed to keep viruses and bacteria from harming your body turn against it and destroy the pancreatic beta cells, which make insulin. No one really understands why the incidence of type 1 is increasing, but it is, across the world.

Overall, how well does medical science understand diabetes? That’s a hard question. We have so much data and evidence, but human biology is so vast that it’s still not enough. In fact, some of the most successful recent treatments have happened by accident.  An extremely important new class of medications for type 2 diabetes is called GLP-1 agonists; they’re injectable drugs that increase insulin secretion and decrease hunger and food intake. This was discovered in the venom of the Gila monster. And with respect to the autoimmunity in type 1 diabetes, we are frustratingly far from understanding the actual processes. Even if people like myself are able to regenerate human beta cells, we still have a large gap of knowledge on preventing the destruction of those cells by the immune system. So we have a long way to go.

What drew you to endocrinology? It’s a complicated field; the biology is very elegant. There are multiple systems operating in parallel where different parts of the body— the brain, the pituitary and adrenal glands, the thyroid, the ovaries and testicles—communicate with each other, and there’s all of this feedback going on such that when the systems are working properly, it’s very fine-tuned. When something isn’t going right, it’s like a detective’s puzzle trying to sort out the problem. Also, my maternal grandmother had adult-onset type 1 diabetes, and it dramatically influenced her three daughters, two of whom became nurses.

What do you find gratifying about your specialty? One thing I love is that you develop long-term relationships with your patients. I celebrate with them when they improve their diet or lose a few pounds and their diabetes gets under better control. And the technology for diabetes management has improved dramatically in the past five or ten years. We have new medications that help people with type 2 lose weight and at the same time get their blood sugars under control. In type 1, the new insulin pumps and continuous glucose monitors—and the technology that connects blood sugar measurement to insulin delivery—are incredible. It’s an exciting time to be an endocrinologist.

Could you describe your vision for the division? I couldn’t be happier to be joining such an accomplished group, which has a long history of top-notch clinical care and research. I’m hoping to grow the research component; almost all the faculty have had some research training, but the way the division is currently set up, it’s not easy for them to do clinical research alongside their full patient-care load. I’m also interested in helping individual clinicians develop an area of specialization in which they can become experts; it helps our division and can be very rewarding for the physician. Another area I’m hoping to move forward is the training of physician-scientists. We already have a wonderful fellowship program in endocrinology, and we will be applying for grants to support the transition between clinical and research training to help junior faculty navigate the grant-writing process and gain experience so they can go forward and make medically related discoveries.

What are your plans for the Weill Center for Metabolic Health? My first charge is to assemble all the people on campus who are doing metabolic-related medical research; there are actually quite a number in different departments and fields. For example, there is an active group in adipose biology—the biology of fat tissue—and there are researchers doing drug discovery toward new approaches to diabetes treatment and much more. In addition, we have resources to recruit junior or even senior scientists, and I’m hoping to develop a live mouse phenotyping core [a facility to help characterize disease in a mouse model] that will allow for sophisticated metabolism-related testing. But the idea is not for the center only to do basic science. I’m hoping we’ll have a broad base that spans all the way to patient-oriented clinical research. We’d also love to link to psychiatry, global health and all of the other strengths on campus that interface with the field of diabetes.

In terms of psychiatry, how does mental healthcare come into metabolics? It’s highly relevant to the clinical care of diabetes. There are many psychiatric conditions that influence the ability to care for yourself and that influence obesity and weight loss. There are also social-behavioral issues that result from diabetes; I’ve had patients with needle phobia or severe anxiety about hypoglycemia. So collaboration between mental health providers and endocrinologists is a potential area of research and clinical care.

Could you describe your lab’s research? We’re interested in pancreatic beta cells. These are the cells that are scattered throughout the pancreas in small clusters called islets, and they’re the only source of circulating insulin in the body. Most people with diabetes have either too few or dysfunctional beta cells. The main point of my lab is to try to understand, how does the pancreas know how many beta cells it needs, and can we trigger it to generate new ones? Our approach involves the fact that the mouse pancreas is able to make new beta cells, but the human pancreas doesn’t seem to have that capacity very robustly. So I’d love to understand the defect in the human pancreas such that it can’t generate new beta cells at will, and try to overcome it.

Nowadays, most people understand the health dangers of smoking. Is there something you wish the public knew about the behaviors that can lead to type 2 diabetes? The concept of what people in our country think is a normal meal needs to be changed; a giant plate of pasta with a little sauce on top and a loaf of bread on the side is not a healthy way to eat. At a lot of restaurants you find an overabundance of starchy, sweet foods. Another really important point is that kids should eat the same food as their parents, and families should eat a healthy variety of foods. I’ve had adult patients tell me, without even thinking twice about it, that they don’t eat vegetables. I’d like sugar-sweetened beverages to be a dessert item taken in small quantities. There needs to be better nutrition education that all this sugar is not normal fuel for the body; even elite athletes don’t eat like that. And I wish our culture had more of a physical activity component to it. I object to the concept of exercise as something you have to add to your day because you’re supposed to; I wish it were something more people just naturally did because our bodies are made for it and it’s fun.