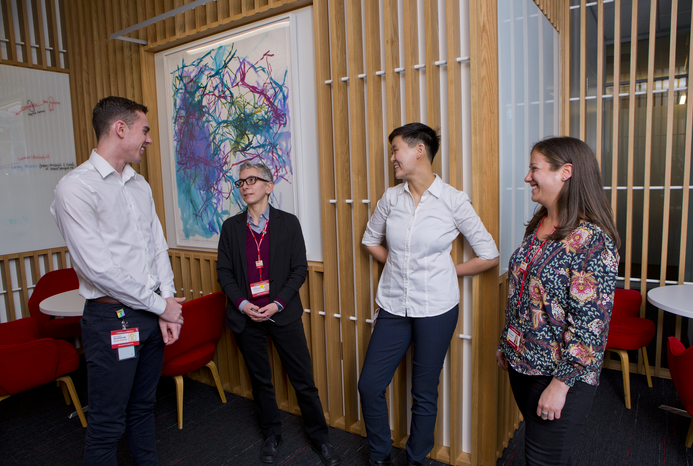 LGBTQ individuals battling mental health issues often confront a double stigma: prejudice and discrimination based on their sexual orientation or gender identity, as well as the negative bias that is frequently associated with mental illness. On top of that, studies have shown that when LGBTQ patients do go for treatment, they frequently feel uncomfortable or inadequately cared for. “Particularly with the transgender community, they often deal with everything from staff using incorrect names or pronouns to outright being refused care,” says Dr. Jessica Spellun, an assistant professor of clinical psychiatry at Weill Cornell Medicine. “Having those kinds of experiences makes it harder to reach out for help.”

When Constance Zhou and Matthew Wickersham came to Weill Cornell Medicine in fall 2017 as first-years in the Tri-Institutional M.D.-Ph.D. Program, they were already familiar with this problem. Both identify as members of the LGBTQ community, and each have friends who had told them about difficulties they encountered when navigating the healthcare system. Some had seen clinicians who assumed they were straight, while others were routinely misgendered by providers. They’d also heard stories of people who developed alcohol or substance use issues as they struggled with their identities and encountered scorn when they eventually sought aid. Determined to do something to help, within weeks of meeting on campus Wickersham and Zhou started working to establish a free psychiatric clinic exclusively for LGBTQ patients. “There’s such a large need,” says Zhou, “especially in New York City, where there are a lot of resources, but there are also so many people seeking mental health services.”

Thanks to their efforts—and the help of about 40 medical and M.D.-Ph.D. students, trainees and clinicians who volunteer their time (including Dr. Jessica Zonana, an assistant professor of clinical psychiatry and the clinic’s medical director, and Dr. Spellun, its mental health director)—the new facility opened its doors in March 2019. Dubbed the Weill Cornell Medicine Wellness Qlinic, it operates Wednesdays from 6:00 to 9:00 p.m. in donated space at NewYork-Presbyterian/Weill Cornell Medical Center. It’s the city’s first student-run mental health clinic for the LGBTQ community, a group that has disproportionately higher rates of depression, anxiety, substance use and intimate partner violence.

In fact, according to recent statistics from the National Alliance on Mental Illness, lesbian, gay and bisexual adults are more than twice as likely as heterosexual adults to struggle with a mental health condition. Meanwhile, high school students who identify as lesbian, gay or bisexual are almost five times as likely to attempt suicide than their heterosexual peers. That figure is even higher for transgender youth: the 2015 U.S Transgender Survey, conducted by the National Center for Transgender Equality, found that 40 percent of respondents reported having attempted suicide, a shocking 92 percent of them before age 25.

The clinic spreads the word about its services largely through social media and partners like Manhattan’s Callen-Lorde Community Health Center, which has treated LGBTQ patients for 50 years. When individuals call for an appointment, clinic volunteers conduct a detailed intake interview to determine how to move forward. The staff then works as a team to provide care that can include individual counseling, medication management and group therapy; all students and trainees are supervised by a senior psychiatrist or psychologist. Since the clinic is currently only open a few hours a week, those who need more intensive psychotherapy or techniques not offered by doctors there are referred elsewhere.

About 50 patients have reached out for assistance so far, and Zhou says they’re already seeing results; in particular, a weekly coping skills group that helps patients manage intense emotions or distress has received overwhelmingly positive feedback. “People have said, ‘I was nervous the other day, but I used this strategy and it really got me through the moment,’” says Zhou, who serves as co-executive director with Wickersham. “Hearing things like that is really rewarding.”

At the same time, the clinic is addressing inequities facing the LGBTQ community by training future physicians in working with sexual and gender minorities. All volunteers are required to take an eight-week course that teaches them about the population’s specific needs—such as how to discuss medical or surgical options for transgender patients and ways to approach LGBTQ individuals who may have experienced trauma—in addition to providing an overview of risk factors that doctors should be aware of when assessing patients including suicidal or self-harming behavior, unsafe sexual practices and substance use. The curriculum is also designed to introduce students to inclusive and affirming language aimed at showing LGBTQ patients that they’re in a safe space.

The elective course is open to all medical students, regardless of whether they plan to volunteer at the clinic. Dr. Zonana sees such knowledge as a valuable part of any future physician’s education. “The more mental health experience you have as a doctor—no matter what field you go into—the more it helps in terms of better understanding your patients,” she says. “And learning to communicate effectively and sensitively is something that applies to everyone.”

Clinic volunteers are engaging in broader interventions, too. Since LGBTQ adults have an estimated three times greater risk of opioid use disorder compared to cisgender heterosexual adults, Dr. Zonana is overseeing a research project that involves students distributing naloxone—a drug that can rapidly reverse an opioid overdose—to LGBTQ bars and clubs throughout the city. The study is intended to explore the feasibility of using these non-traditional settings for naloxone education and distribution, with the aim of better reaching people who might be at higher risk for overdose.

Moving forward, Zhou and Wickersham hope to add to the clinic’s pool of volunteers so they can expand its hours of operation. Wickersham adds that they’ve spoken about the program at several conferences, prompting other medical schools to reach out about how they can launch similar projects. “We’re trying to show other people that this really works,” says Wickersham. “We would love to see this model perpetuated in other places, so there is even more access to LGBTQ mental healthcare.”