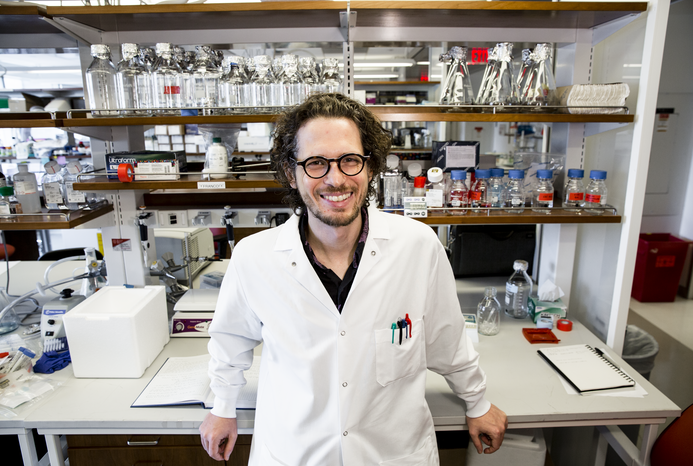 Dr. Dan Landau, an associate professor of medicine and a member of the Sandra and Edward Meyer Cancer Center at Weill Cornell Medicine, has been named a 2020 Vallee Scholar by the Vallee Foundation.

The award, which was established in 2013, recognizes outstanding junior faculty at a critical juncture in their careers. Dr. Landau will receive $300,000 from the Vallee Foundation for his studies on somatic gene mutations in single cells that are part of seemingly normal, noncancerous tissues, but which may be precursors to cancer.

“The Vallee Foundation is providing us with funding to go in scientific directions that are challenging, but that have the potential to make a significant impact on how we understand human biology,” said Dr. Landau, who is also a core member of the New York Genome Center, and an oncologist at NewYork-Presbyterian/Weill Cornell Medical Center.

Somatic mutations are those that occur in the DNA of any individual cell except egg and sperm cells. Some somatic mutations, which develop over the course of a person’s life, have been associated with cellular changes that are seen in cancers. However, because they occur in single cells, their effects are not detectable using a microscope or other conventional methods, making it difficult to understand how they work.

Dr. Landau and his research team will continue to pioneer single cell multi-omics sequencing technology for the study of somatic evolution, building on their two recent studies described in Nature in 2019 which can sequence a single cell’s DNA and RNA or a single cell’s RNA, DNA and epigenome.

“This provides us with a unique opportunity to see what these mutations are doing in the context of these almost normal cells and capture multiple layers of single cells,” said Dr. Landau. “We want to know which cells have mutations, but also what’s different about them as a result of the mutation, so that we can understand the function of mutations and potentially conceive of strategies to intervene.”

The Vallee Foundation, based in Boston, was established by Bert and Kuggie Vallee to stimulate development of interdisciplinary sciences related to human health by promoting interaction between scientists around the world.

“To be part of this community of excellence has significant value that goes well beyond their very important financial support for our work,” said Dr. Landau.