Strokes Occur More Frequently in Patients with COVID-19 Compared to Flu, but Overall Risk is Low 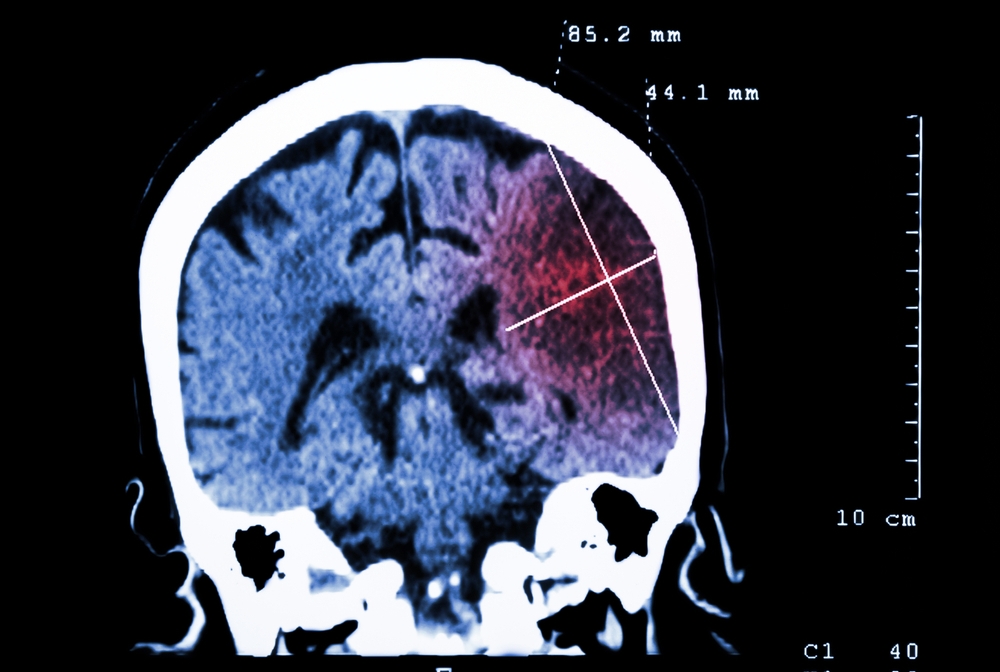 CT-scan of brain of a stroke patient. Credit: Shutterstock

COVID-19 patients have a higher risk of stroke than patients with influenza, according to a study from researchers at Weill Cornell Medicine and NewYork-Presbyterian. But stroke risk with COVID-19 is still low in absolute terms and is largely confined to older patients who already have stroke risk factors, the researchers found.

The study, published July 2 in JAMA Neurology, found that the rate of ischemic strokes—caused by blockage of arteries supplying the brain—in a series of nearly 2,000 patients who visited the emergency department (ED) or were hospitalized for COVID-19 was 1.6 percent, about seven times higher than the rate of ischemic strokes in a comparable series of influenza patients.

“According to our study, the relative risk of ischemic stroke is considerably higher with COVID-19 than with influenza, although the absolute risk appears low at approximately 1.6 percent,” said senior author Dr. Babak Navi, an associate professor of neurology in the Department of Neurology and an associate professor of neuroscience in the Feil Family Brain and Mind Research Institute at Weill Cornell Medicine and chief of the Division of Stroke and Hospital Neurology at Weill Cornell Medicine and NewYork-Presbyterian/Weill Cornell Medical Center.

Strokes, which affect about 800,000 people in the United States every year, are a leading cause of death and disability in the country and worldwide. In most cases they are ischemic strokes that arise when blood clots form or lodge in arteries providing blood to the brain, often because of an age-related, thickened-artery condition called atherosclerosis.

Doctors know that infectious diseases can sometimes trigger ischemic strokes by increasing inflammation, which in turn can worsen atherosclerosis and also directly activate the blood’s clotting system. Influenza in particular has been linked to a moderately increased stroke risk. Anecdotal case reports from doctors and studies of groups of patients hint that COVID-19 is associated with a much worse risk of stroke, and at least one report has suggested that otherwise young and healthy people who get the disease are at risk of having strokes.

To get a better sense of the relative risk of stroke in COVID-19 compared to influenza patients, Dr. Navi, who is also an associate attending neurologist at NewYork-Presbyterian/Weill Cornell Medical Center, and his colleagues conducted a direct comparison of these two viral respiratory diseases. The researchers examined data from NewYork-Presbyterian/Weill Cornell Medical Center and NewYork-Presbyterian Lower Manhattan on two sets of patients. The first was a series of 1,916 patients with test-confirmed, active COVID-19 who visited the ED or were hospitalized between March 4 and May 2 of 2020. The second set comprised 1,486 patients who visited the ED or were hospitalized with lab-confirmed influenza from January 1, 2016 through May 31, 2018.

The researchers found that 31 (1.6 percent) of the COVID-19 patients, but only three (0.2 percent) of the influenza patients, presented with an acute ischemic stroke or developed one while hospitalized. After adjusting for differences in age and other factors between the two cohorts, they concluded that COVID-19 was associated with a 7.6 times greater ischemic stroke risk compared to influenza.

The strokes that occurred in the COVID-19 patients were generally confined to older patients—the median age was 69—and patients with known stroke risk factors such as hypertension and diabetes. The stroke patients tended to have more severe COVID-19 disease, and on average had much worse signs of inflammation and clot risk on blood tests.

All of the strokes in the COVID-19 group occurred in patients who were hospitalized, and while a few of these patients arrived at the hospital with stroke symptoms, most suffered their strokes after they had already been under care for COVID-19 for days. The median interval from the start of COVID-19 symptoms to the appearance of stroke symptoms was 16 days.

“Our results emphasize the need to better understand how COVID-19 affects the brain and blood-clotting mechanisms,” said co-first author Dr. Alexander Merkler, an assistant professor of neurology at Weill Cornell Medicine and a neurologist at NewYork-Presbyterian/Weill Cornell Medical Center.

The researchers are conducting a follow-up study to develop a stroke risk score algorithm to identify the COVID-19 patients who are most likely to develop strokes.

“For now, doctors treating COVID-19 patients should be vigilant for stroke signs and symptoms, especially when early intervention with clot-busting drugs or other treatments is possible,” said co-first author Dr. Neal Parikh, also an assistant professor of neurology at Weill Cornell Medicine and a neurologist at NewYork-Presbyterian/Weill Cornell Medical Center.