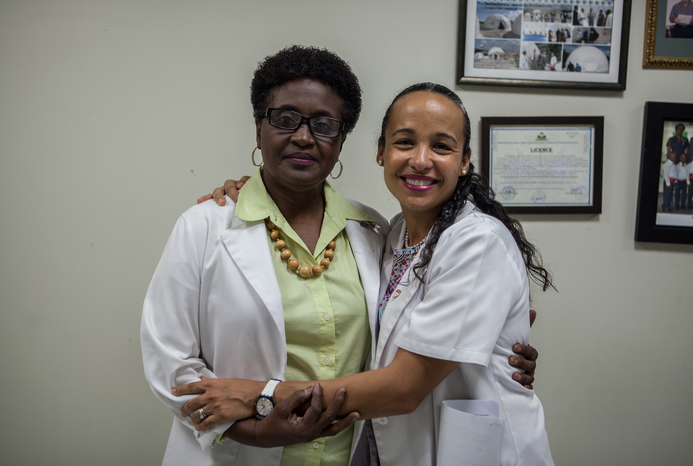 As the epicenter of the COVID-19 pandemic moves to Latin America and Africa, Weill Cornell Medicine faculty based in Haiti, a country hard hit by natural disasters and poverty, have developed lessons on what low-resourced countries can do to address and treat the outbreak on the ground.

Anticipating the surge in cases, health workers quickly scaled up the medical and public health response, reports Dr. Vanessa Rouzier, assistant professor of pediatrics in medicine in Weill Cornell Medicine’s Center for Global Health, in a letter published June 16 in the New England Journal of Medicine, with colleagues Dr. Bernard Liautaud and Dr. Marie Marcelle Deschamps. All three are physicians at GHESKIO Centers, clinics based in Port-au-Prince that treat infectious diseases including HIV/AIDS, tuberculosis, and cholera.

"Haiti has one of the highest mortality rates in the world from natural disasters. The same factors make it particularly susceptible to a viral pandemic: poverty, food insecurity, lack of clean water and sanitation, scarce health care, low education, political division, and densely populated slums controlled by gangs and inaccessible to public officials,” the authors write. “As COVID-19 surges in Latin America and Africa, lessons learned in Haiti will be applicable in other low-income countries with similar vulnerabilities.

Based on their experience, the authors advise pooling resources from public and private institutions; working with the country's ministry of health to scale up successful interventions; using grassroots community engagement to gain trust and fight stigma; and rapidly developing and adapting screening, testing, and care guidelines.

As of June 16, there were over 4,500 confirmed cases in Haiti’s population of around 11 million, a fraction of actual rates as testing capacity is overwhelmed. (In mid-May, 70 percent of 1,000 people there tested positive for the virus).

Haiti took some similar measures to the United States and other nations at the onset of its outbreak in mid-March, such as halting commercial passenger flights, closing schools and factories, banning public gatherings, and asking people to wear masks. This helped slow the spread between March and May, giving GHESKIO and other healthcare systems time to prepare, said Dr. Rouzier. Still, around 24,000 migrant workers returned to the country from the Dominican Republic, which is suffering one of the region’s worst outbreaks and significantly drove up community spread.

With high poverty rates, a large informal economy, and a thin safety net, Haiti could not close down as the United States and Europe did, and few can work from home, Dr. Rouzier said. Half the population lives on $2 or less a day, and a day off of work can mean going hungry, according to the authors.

Moreover, rumors about COVID-19’s origins and transmission, along with mistrust of the government, have contributed to fear about getting tested and skepticism about the virus. Some citizens have attacked hospitals, threatened healthcare workers, and thrown stones at mobile testing teams.

In response, GHESKIO has focused on a grassroots effort to reduce fear of testing and treatment. The organization hired 1,000 community health agents to go to marketplaces and door to door to educate residents about how COVID-19 is spread, and its symptoms. Since then, hundreds of patients have come in each week seeking testing and care.

“Oftentimes it's that bridge to accessing care that's missing. If the person has somebody from their community that can recommend a place, there’s more trust being built and they're more likely to seek services,” Dr. Rouzier said.

Haiti is also struggling with a lack of resources, as nations that provided aid after disasters such as the 2010 earthquake are now consumed with managing COVID-19 within their own borders.

Although over 40 centers in Haiti are equipped to perform COVID-19 testing, the U.S. manufacturer of the test for that platform is currently not distributing tests in the country. This leaves only the Haitian National Laboratory and GHESKIO, which can perform PCR (polymerase chain reaction) testing using other platforms.

“Unlike prior humanitarian crises in Haiti when resources and international technical experts flooded into Haiti, we are now on our own,” the authors write.

GHESKIO has pooled resources and expertise with the Haitian National Laboratory and Ministry of Health to train clinicians—often via social media—and transformed its cholera treatment center to provide care for coronavirus and medical conditions that are exacerbated by the virus, like diabetes, hypertension, and tuberculosis, and identify at-risk populations like the elderly and pregnant women.

Of the 520 patients with confirmed COVID-19 seen at GHESKIO, 79 (15 percent) required hospitalization, six (just over 1 percent) have died, and 435 (about 84 percent) are being monitored at home by cellphone.

“When people show up too late in the course of the disease, there's little that we can do to save them. So far, for patients that don’t come in with their last breath, it's been successful,” said Dr. Rouzier. “It’s good to be able to see that with really basic care—oxygen, IV fluids, basic anticoagulant medication—you can save people's lives and send them back home.”

While the country’s challenges make containing COVID-19 an enormous effort, write the authors, they also confer an advantage.

“Infrastructure the country has put into place in response to its public health challenges is now poised to help the country in its response to COVID-19,” they write. “Haiti is susceptible to natural disasters and infectious epidemics. But we are also resilient, creative, and relentless when faced with overwhelming challenges. We have overcome worse, and we will overcome COVID-19.