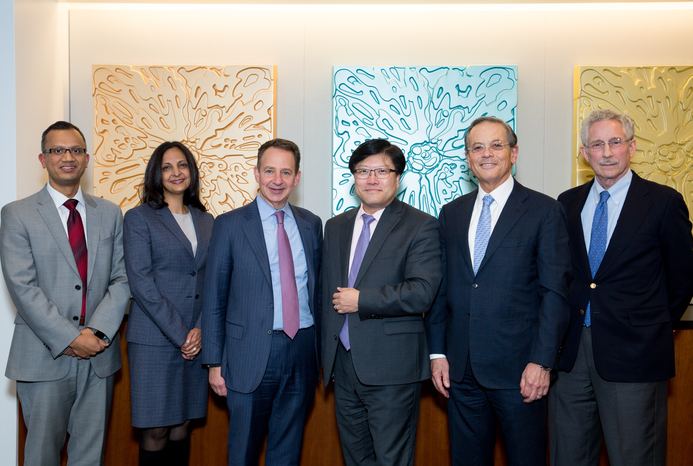 Dr. Jyotishman Pathak, chief of the Division of Health Informatics at Weill Cornell Medicine, is a researcher who jokingly says that he’s “still learning to fake business” after launching a new company just six months ago. Though new to the business world, by any measure, he’s already a success.

Dr. Pathak is the co-founder of Iris OB Health, Inc., the startup he co-created through Weill Cornell Medicine’s BioVenture eLab and won the $75,000 first prize in the institution’s Biomedical Business Plan Challenge earlier this year. The company is tackling an under-addressed healthcare problem: how to create a more effective screening process for postpartum depression, and to connect the at-risk population to mental health resources. Iris is marketing a data-driven approach to achieving this goal, by way of a digital platform that leverages artificial intelligence to sift through data from health devices, patient reported outcomes, health insurance claims and electronic medical records to pinpoint patients at risk for postpartum depression.

“At the end of the day, all of this work can be a very slow and frequently frustrating process, but it is incredibly rewarding to start a venture like this,” Dr. Pathak said, discussing his work Nov. 20 at the Dean’s Third Annual Symposium on Entrepreneurship and Academic Drug Development. “You clearly need a great idea and a strong team, but what led our journey here is engaging with the BioVenture eLab, which guided us. We received robust mentoring from experts and visionaries in the field helping us to further develop this technology.”

Dr. Pathak, also the Frances and John L. Loeb Professor of Medical Informatics and vice chair for entrepreneurship in the Department of Healthcare Policy and Research at Weill Cornell Medicine, was one of five speakers who presented their insights into how entrepreneurship can power medical innovation at the symposium. About 150 people attended the meeting, which took place in the institution’s Belfer Research Building.

“This event has become an outstanding forum to learn about the power of collaborations between academic scientists, industry and the investment community,” said Dr. Augustine M.K. Choi, the Stephen and Suzanne Weiss Dean of Weill Cornell Medicine.

Over the course of his six years in New York, Dr. Choi said he has witnessed an upward trajectory for the city as it has come to stand alongside healthcare and business centers like Boston and San Francisco. He added that Weill Cornell Medicine has been at the center of it all.

“At Weill Cornell Medicine, we have a unique set of drug development programs capable of taking early discoveries made in labs to FDA-approved testing in clinical trials,” Dr. Choi said. “There is so much potential and so many pathways for you to bring your research to the clinic, and I encourage you to explore the different options you’ll hear about during this symposium.”

The need for medical institutions to foster new generations of innovators and entrepreneurs is key to advancing new treatments and cures for the public good, said keynote speaker Dr. Arie Belldegrun, the executive chairman and co-founder of Allogene Therapeutics, Inc., as well as the Roy and Carol Doumani Chair in Urologic Oncology at UCLA. It’s also a path with which he has personal experience. A biotech entrepreneur, Dr. Belldegrun has been at the epicenter of business and medicine for the past two decades. Back in 1996, he founded Agensys, Inc., serving as its founding chairman of its Board of Directors right up to its acquisition by Astrellas. That success led to a string of similar benchmarks. Most recently, he founded Kite Pharma Inc., which was acquired by Gilead Sciences in 2017 for $11.9 billion.

When reflecting on what makes for success, Dr. Belldegrun said it’s not just the work itself, but also the contributions of those around you.

“You need technology that works in the right way, yes,” he said, “but you need to surround yourself with the best team, you have to bring on the best team to reach new frontiers.”

It’s a theme that the event’s second keynote speaker, Alan Hartman, partner in Centerview Partners, highlighted. Hartman is a leading advisor in the healthcare industry, having counseled medical leaders in more than $800 billion of transactions over the years. He said that the biotech industry is impactful for investors and most importantly, patients. At the end of the day, both the financial and medical industries need to work together, he said.

“It doesn’t make it to the patients unless there are people willing to invest,” he added.

Dr. Rainu Kaushal, chair of the Department of Healthcare Policy and Research and the Nanette Laitman Distinguished Professor of Healthcare Policy and Research at Weill Cornell Medicine, and physician-in-chief of healthcare policy and research at NewYork-Presbyterian/Weill Cornell Medical Center, noted that the best approach to advance innovations to market is one that fosters collaboration between researcher and patient. For instance, she discussed how this patient-inclusive approach is key to clinical-data sharing and the role it can play in empowering the next great medical innovation. As health systems increasingly move to share data across medical research institutions, information from clinical trials needs to be ethically shared with patient involvement in the process.

“Patients need to be involved in all aspects of research,” she said.

Weill Cornell Medicine is in the rare, if not unique, position among medical colleges in providing its faculty the on-site opportunity to take an innovative idea all the way from early finding to proof of concept in patients, according to Dr. Carl Nathan, chairman of the Department of Microbiology and Immunology and the R.A. Rees Pritchett Professor of Microbiology.

For example, the Tri-Institutional Therapeutics Discovery Institute (Tri-I TDI) carries out professional, in-house, early-stage drug development for both small molecules, human antibodies and cell-based therapies, while offering instruction in new drug development to the Weill Cornell Medicine community. For projects at an even earlier stage, Tri-I TDI offers invaluable professional advice and assistance. Tri-I TDI, in turn, works closely with Bridge Medicines, Inc., which takes projects that “graduate” from Tri-I TDI and readies them for clinical trials. The Office of BioPharma Alliances and Research Collaborations matches faculty projects with collaborating drug companies, biotech firms and investors, as well as offering training and networking for business development through its BioVenture eLab. The Daedalus Fund for Innovation awards competitive funding of either $100,000 or $300,000 for one or two-year periods, respectively, enabling enables promising projects to graduate to the more advanced stages of testing or business development. The Cornell Center for Technology Licensing protects the intellectual property for all these initiatives. This support network is a fully-funded, fully-staffed unbroken pathway from basic academic scientific research discovery to human proof of concept.

Dr. Nathan emphasized that all Weill Cornell Medicine’s research faculty and trainees innovate. Taking steps to translate innovations to interventions is a rigorous way to test their validity, and also an engine to drive further basic innovations, he said. Therefore, in his view, most of the institution’s research-engaged faculty could benefit from engaging in translation with the aid of Weill Cornell Medicine’s innovation ecosystem, even though only a few will want to play an active role in any new companies that might result.

“The innovation ecosystem established at Weill Cornell Medicine is an extraordinary resource and a privilege,” Dr. Nathan said. It can be even better, he noted, with “one front door” and coordinated guidance. “This will make it easier for faculty to find the right approach for translating each promising idea,” he added, “and, hopefully, bringing it to the point of benefitting patients.”