Family Man: Dr. Pak Chung Gets a Creative Thank-you From Some Grateful Patients 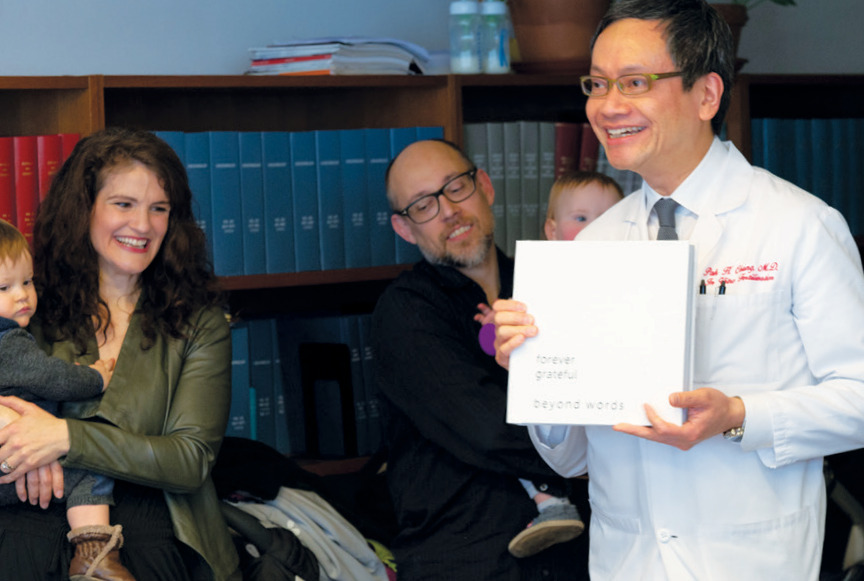 The Greatest Gift: Dr. Pak Chung was surprised with a book of patient portraits and a gathering of some of the families he's helped create. All photos: Jason Peralta

Earlier this year, some 20 families gathered in a conference room at the Ronald O. Perelman and Claudia Cohen Center for Reproductive Medicine at Weill Cornell Medicine. They kept their voices hushed as they waited for the arrival of the person they all had in common: Dr. Pak Chung, an attending physician at the center and an associate professor of clinical obstetrics and gynecology. “When I walked in, for a second I didn’t know what was going on,” Dr. Chung recalls. “Then I took a closer look and realized that I knew them all—they were all my patients.”

As a speechless Dr. Chung took in the crowd, he began to notice the many children, from infants to tweens—all of whom exist in large part because of his work. It was then that the group presented him with a second surprise: a custom-made hardcover book filled with black-and-white portraits of 38 families whose children were conceived with Dr. Chung’s help. Alongside each professional-quality photo is a personal message of gratitude from the parents. “When all seemed lost, we found you,” reads one. Says another: “Every day, when we sit together at the dinner table, play together in the park or read a story before bedtime, we think about how none of it would have been possible without your guidance...and emotional support.” On the volume’s last page, a blank space represents all of the “Chung babies” who are yet to be born.

“I could talk all day long about how wonderful Dr. Chung is,” says Lindsay Cook, a children’s photographer who spent months organizing both the book—she took most of the portraits in the Manhattan studio where she works—and the surprise party. Cook and her husband came to Dr. Chung in 2014; after undergoing several types of procedures, including in vitro fertilization, they are now the parents of healthy 1-year-old twins, daughter Audrey and son Evan. “There’s not a day that goes by that I don’t think of him,” says Cook. “I see him when I see my babies, and I always will.”

After the birth of their twins, the Cooks were left with a daunting question: How does one thank the person who helped create their children? “I thought maybe I would send him a picture, but that just didn’t do it justice,” Cook says. “It finally struck me that if I feel this way about him, I’m sure other people do too.” She took to social media, seeking fellow Dr. Chung patients through the UES (Upper East Side) Mommas Facebook group. “Within two hours, the post had 1,000 likes and people were commenting from all over the world about how amazing he was,” she says. “People started calling the studio, and the rest is history.”

Dr. Chung, who joined the Weill Cornell Medicine faculty in 1996, says that the appreciation goes both ways. “I feel so honored and fortunate to be able to work with these patients, who gave their trust and faith in me and the center—however, what I can provide for patients is a collective effort under the visionary leadership of our mentor, Dr. Zev Rosenwaks,” says Dr. Chung, who estimates that he has helped enable more than 4,000 births over the course of his career. As Cook adds with a laugh: “When my kids are old enough to ask where babies come from, I’m going to explain to them that they come from Dr. Chung.”

The Greatest Gift: Dr. Pak Chung was surprised with a book of patient portraits and a gathering of some of the families he's helped create.