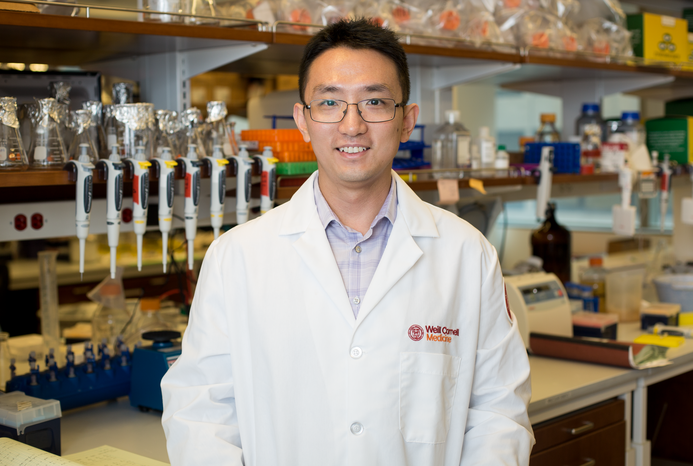 Dr. Chun-Jun (“C.J.”) Guo, an assistant professor of immunology in medicine in the Division of Gastroenterology and Hepatology and scientist at the Jill Roberts Institute for Research In Inflammatory Bowel Disease at Weill Cornell Medicine, has won a Director’s New Innovator Award from the National Institutes of Health (NIH) for an ambitious project to detail how the hundreds of different bacterial species living in the human gut contribute to human health and disease.

The NIH Director’s New Innovator Award, part of the NIH Common Fund, was established in 2007 to support “exceptionally creative early-career investigators who propose innovative, high-impact projects.” The award provides $1.5 million up-front to scientists, plus additional funds for university overhead costs, and is intended to support research programs lasting five years. Dr. Guo is among 60 scientists nationwide to receive the prestigious award this year.

“I’m very grateful for this award,” Dr. Guo said. “It provides my lab with a unique and exciting opportunity to pursue high-risk, high-reward research that would not get funding through traditional NIH grant mechanisms.”

Dr. Guo is an expert on the genetic manipulation of gut microbes. The diverse population of microbes in the human gut—the gut “microbiome”—has become a major focus of research in the past decade, as scientists have recognized it as a factor in major illnesses including inflammatory bowel disease, arthritis, diabetes and cancer. But determining in molecular detail what the roughly 1,000 species of gut microbes do to trigger disease or help maintain human health is an enormous undertaking.

“We are delighted that Dr. Guo is a recipient of this prestigious award and look forward to his groundbreaking studies in what has become one of the most exciting areas of biomedical research,” said Dr. David Artis, director of the Jill Roberts Institute for Research In Inflammatory Bowel Disease and the Friedman Center for Nutrition and Inflammation at Weill Cornell Medicine.

Dr. Guo’s NIH-funded project is intended as a big step forward in this effort. Scientists know that microbes influence health and disease to a great extent by their production of “metabolites”—small organic molecules that in turn can affect their human host’s metabolism, immune system, and even nervous system. Dr. Guo and his team will analyze existing genomic datasets on gut microbes to predict which microbial genes are involved in synthesizing important metabolites. They will use advanced CRISPR gene-editing techniques and other innovative tools to modify microbes so that their metabolite genes can be easily switched on or off. Finally, they will establish populations of these engineered microbes in animal models to study the physiological effects on the host, with particular attention to the host immune system.

“We’re hoping with this project to identify some of the key molecular mechanisms by which gut microbes influence human health,” Dr. Guo said. “This project also will move my lab toward its long-term goal of being able to engineer microbial communities in which we can control the metabolites they produce for therapeutic use.”