Tough Talks: When Breaking Bad News it’s Essential to do it Right

Breaking Bad News is One of the Hardest Parts of Practicing Medicine—and for the Wellbeing of Patients and Even Doctors, it’s Essential to do it Right 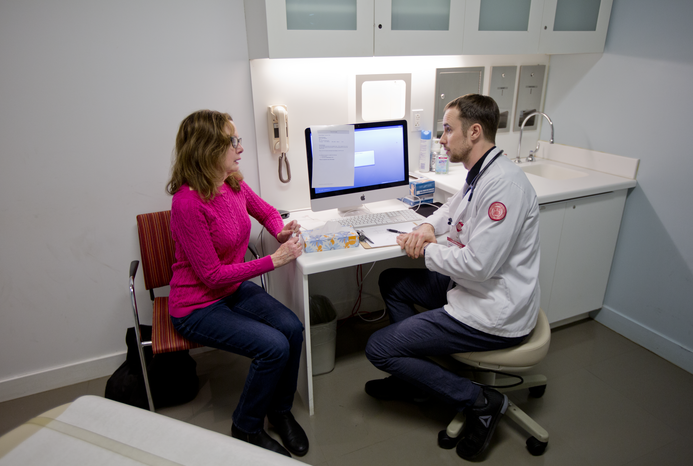 Dr. Mohamud Verjee will never forget how he learned of his mother’s death. In private practice at the time, he was in the midst of seeing a patient when the call came in to the front desk; after the patient left, Dr. Verjee’s medical partner was tasked with giving him the awful news. “He knocked on the door and stood in the doorway—didn’t even come in, just poked his face around—and said, ‘There’s no other way to tell you this: your mother’s dead. You’d better go and see her,’ and closed the door,” recalls  Dr. Verjee, an associate professor of family medicine and assistant dean for medical student affairs at Weill Cornell Medicine–Qatar. “It took seven seconds.”

For the past decade, Dr. Verjee has been training medical students in the art and science of breaking bad news to patients and their families. And though the way he learned about his mother’s passing wasn’t a clinical encounter per se, he cites it to his students as a textbook example of breaking such news the wrong way. “It electrifies them,” he says. “They all say, ‘No—you can’t do that!’ ” 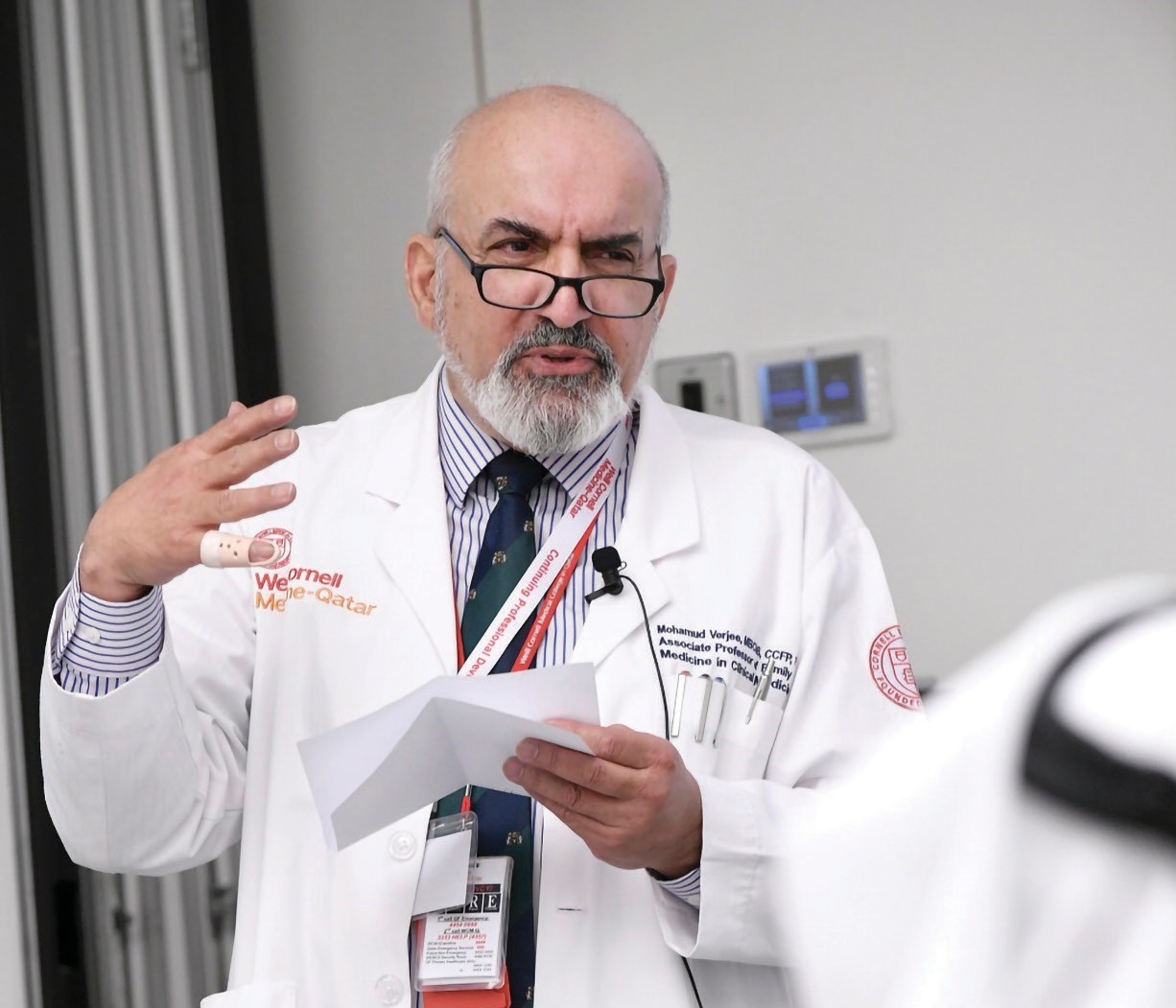 It’s an inevitable part of medical practice, a burden nearly every physician must bear: telling a patient and their loved ones the kind of news that no one wants to hear. It could be something relatively innocuous, like slightly abnormal results on a blood test that needs to be repeated. Or it could be devastating, such as a diagnosis of advanced cancer or the news that a family member has died of their injuries in a car accident. Practitioners have been having these difficult encounters for centuries—but in recent decades, the methods for doing so have become more codified, and today’s medical students receive formal training on how to manage this element of their future practice. “I consider breaking bad news a high-level skill; it’s a very complex discussion,” says Dr. Yoon Kang, acting senior associate dean for education, the Dr. Richard P. Cohen Associate Professor of Medical Education, and director of the Margaret and Ian Smith Clinical Skills Center. “In many instances, it’s a real challenge even for skilled and seasoned physicians to deliver bad news—not only to the patient, but often also to their family.”

At Weill Cornell Medicine, students are introduced to the concept of breaking bad news as a distinct doctor-patient encounter early in their education. Their first year, in a session in the Health, Illness and Disease course, students hear positive and negative examples and have the chance to role-play with each other. As part of the primary care clerkship, students participate in an assessment of real-world skills in which they interact with a trained actor—known as a standardized patient—that’s centered around explaining worrisome test results. The topic of breaking bad news figures prominently in the Transition to Residency class, in which fourth-years are prepared for their lives as newly minted MDs. And in their clinical rotations, doctors-in-training not only have the opportunity to observe seasoned physicians break bad news, but participate in those conversations themselves. “I feel like the curriculum provides a professional extension to human empathy,” says fourth-year MD-PhD student Kevin Boehm. “It emphasizes our shared humanity, that you really need to support the patient. These conversations always feel heavy, because you’re giving someone news about the potential end of their life, or a major modification to it. There’s a lot of sadness or even despair. Being able to practice how to stay steady and honest while also empathetic is so valuable.” 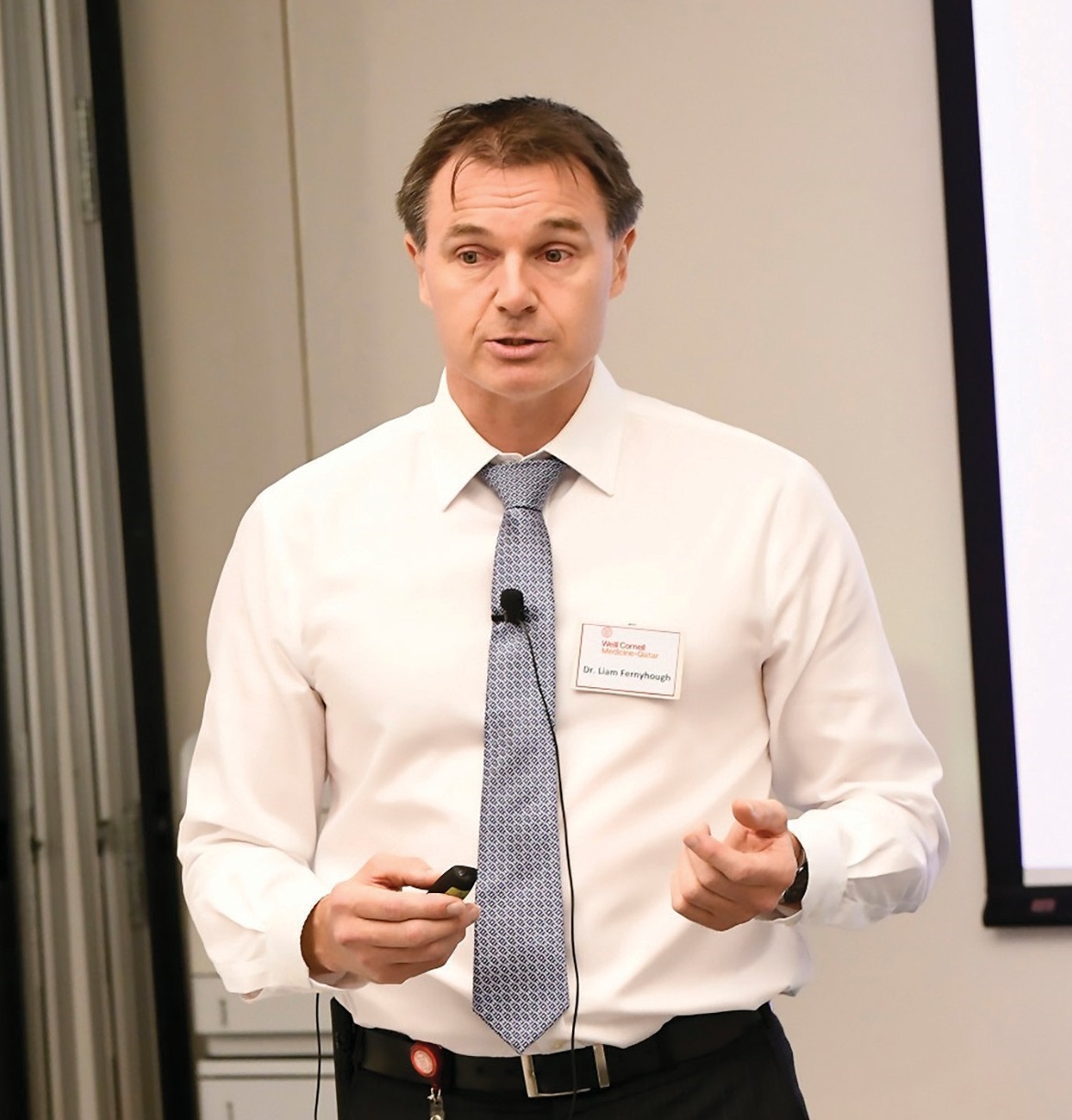 And breaking bad news well isn’t just a matter of supporting a patient emotionally; it can be a key part of a successful treatment plan. If the news is conveyed maladroitly, it can erode trust in the doctor-patient relationship—and if a patient leaves the encounter feeling hurt or even just confused, it can potentially discourage them from pursuing the appropriate care. “If you don’t break bad news in the right way, it can be difficult to get to that next clinical step,” Dr. Kang says. “The nuances are incredibly important, because the goal is to have the patient—in the best sense of the word—hear the news and to have a productive discussion.”

As medical ethicist Dr. Barrie Huberman notes, when a patient receives a difficult diagnosis, it’s both an emotionally fraught moment and an intellectually demanding one. “There’s a lot for people to learn when they hear bad news for the first time,” says Dr. Huberman, a new faculty member in the Division of Medical Ethics who addresses the topic in Transition to Residency, “and an emotional reaction doesn’t bode well for learning.” For example, a patient diagnosed with atrial fibrillation might find out that they can live with this type of heart arrhythmia well and safely if they take their medication properly—but that same medication can be very dangerous if it’s used incorrectly. “So—all within the course of a conversation or two—a person hears they have a heart arrhythmia and has to learn a lot of detail about the medication,” Dr. Huberman says. “There’s often a need to learn when you’re least prepared to.”

In both New York and Qatar, Weill Cornell Medicine students are schooled in best practices for breaking bad news—concrete ways to enhance patient care by ensuring that the encounter is as gentle and productive as possible within the context of an inherently stressful situation. “I find breaking bad news very emotionally difficult, but I don’t think that’s going to go away,” says Dr. Lynne Rosenberg, who matched to a combined residency in internal medicine and pediatrics at the University of Colorado. “I had a physician say to me early in my career, ‘It’s never the wrong thing to care. If it’s hard for you and it makes you feel sad, that’s normal and human.’ I think that any time you have to tell someone unfortunate news, it’s going to be scary. But I feel like I’ve been given the tools and the guidance to do it.” That guidance includes conducting the conversation in a private place without interruptions; constantly assessing the patient’s understanding of the situation as the encounter proceeds; and giving them the relevant information in layman’s terms, without medical jargon—for example, using “spread” instead of “metastasize.” “The idea is to establish rapport and keep the communication going; sometimes that means eye contact and appropriate body language,” Dr. Verjee adds. “A minute may pass where there’s nothing said. But the patient knows, ‘I’m engaged with you, and I’m giving you a chance to sort this out.’”

For a standardized patient encounter at Weill Cornell Medicine–Qatar, Merna Hussein ’19 was tasked with informing a woman that she’d been diagnosed with a form of leukemia. Afterward, the patient told Hussein that she’d done many things right, such as not interrupting—but also gave her some constructive criticism. “She didn’t feel like I gave her enough time or silence to take it all in, and I flooded her with more information than she had wanted,” Hussein recalls, marveling that “in real life, you’ll never get feedback like that.” Hussein, who is headed to an internal medicine residency at Johns Hopkins, sees breaking bad news as an essential part of her training; she notes that during her first week on the wards, she was in the room when a physician gave a patient a diagnosis of colon cancer. In fact, she says, she would have welcomed a wider variety of simulated encounters on the topic. “Although you have a protocol in your head for how to do things systematically, not every patient is going to respond in the same manner,” she says. “One person may go silent, another may get angry. Another may use a defense mechanism of intellectualization, where they focus on the facts and ignore their emotional response.”

Last fall, Dr. Verjee and Dr. Liam Fernyhough, an assistant professor of medicine at Weill Cornell Medicine–Qatar who specializes in hematology and oncology, held a breaking bad news training for practicing physicians in Doha; capped at 24 participants, it filled up quickly, and additional sessions are planned. “People perceive that hematology and oncology are fields where we break bad news, and that this is where we focus those skills. But in fact, every doctor is breaking bad news all the time; it could be someone who has had a stroke or has stage-four heart failure,” Dr. Fernyhough observes. “For most doctors, there’s a great deal of trial and error, and there’s a lot of personalization involved as well. What words are right to us? What personal space is comfortable?”

As Dr. Fernyhough and his colleagues point out, even what constitutes “bad” news can vary widely. One patient diagnosed with hypertension might shrug it off with the notion that it’s fairly common and contentedly take their meds. “Another person might have a family history with early death associated with high blood pressure, and it might be devastating,” Dr. Fernyhough says. “So we can’t always know what defines bad news for any given individual.” That notion comes into play in a simulated encounter that Dr. Kang developed, in which a student sees a patient who has received notice that there is a marked change in her annual mammogram compared to her results from previous years. “The context of this scenario is that all of the patient’s friends who’ve had abnormal mammograms have had breast cancer,” Dr. Kang says. “So in her mind, she already has cancer—that’s the framework she’s beginning with.”

Giving doctors the tools to break bad news well can benefit clinicians as well as patients. Breaking bad news is, after all, one of the toughest parts of practicing medicine, something that can contribute to job stress and burnout. Dr. Huberman, who’s trained in clinical psychology as well as in medical ethics, stresses the importance of having colleagues on a case with whom physicians can process their feelings about particularly tough experiences. Having to break bad news, she says, can constitute a form of “moral injury”—the pain and frustration felt by a doctor who not only has to devastate a fellow human being with a potentially dire prognosis, but who might have no viable treatment options to offer. “One of the ways we can try to prevent that distress and injury is to give doctors good tools for helping, even when they can’t cure,” Dr. Huberman says. “Physicians get into this business because they hope to help people. If you learn how to connect to someone’s emotions and support them—to show them that you care, that they’re heard and understood—that’s a therapeutic intervention in itself. Even if you can’t save them, you have given them something.”