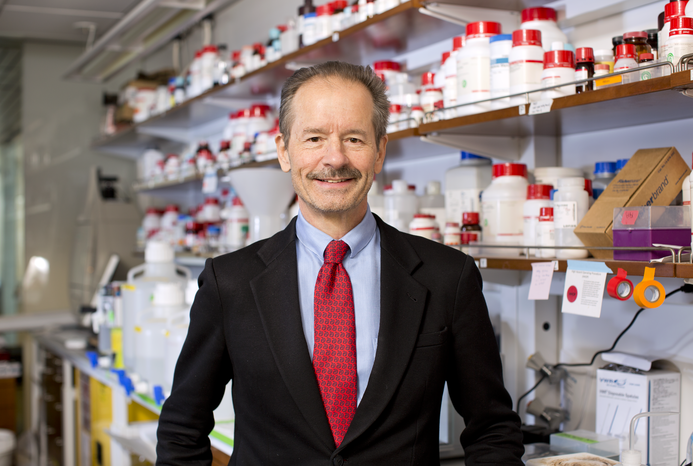 Dr. Lewis Cantley, the Meyer Director of the Sandra and Edward Meyer Cancer Center at Weill Cornell Medicine and NewYork-Presbyterian/Weill Cornell Medical Center, has been awarded a grant from the Gray Foundation to study the genetic mutations that can lead to breast and ovarian cancer, investigating how early-stage precancerous cells can be recognized by the immune system and targeted with preventive or therapeutic cancer vaccines.

Mutations in the BRCA-1 and BRCA-2 gene can result in significantly higher risk of breast and ovarian cancer in women. The Gray Foundation focuses on BRCA-related cancers by accelerating research, improving treatment and raising awareness for individuals who have inherited BRCA mutations.

Dr. Cantley’s team is one of seven multi-institutional, multi-disciplinary teams to be awarded the grant, and will receive up to $5 million for his research project entitled “Identification and Targeting of Post-Translationally Modified Neoantigens Presented in BRCA Mutant Tumors.”

The BRCA proteins play a critical role in repairing damage to DNA. Patients who carry inherited mutations in the BRCA genes accumulate DNA damage in their cells as a result of the lack of normally functioning BRCA proteins. This DNA damage in turn leads to a cellular stress response that causes certain proteins in the cell to be altered compared to those in healthy cells. Recently, scientists discovered that BRCA cancer cells can expose fragments of these atypical proteins to T lymphocytes in the immune system, stimulating the T cells to fight the cancer.

Dr. Cantley’s lab proposes to identify these atypical proteins in early-stage lesions in women who have had breast reduction therapy and carry the BRCA mutation. By detecting which protein fragments are frequently exposed on the surface of the precancerous cells, investigators may be able to develop a vaccine that will enhance immune attack of early-stage lesions and thereby delay or prevent cancers in people with inherited BRCA mutations.

“We have the opportunity to advance an area of BRCA research that taps into the emerging power of cancer immunotherapies and cancer vaccines,” said Dr. Cantley, who is also a professor of cancer biology in medicine at Weill Cornell Medicine. “We are incredibly grateful to the Gray Foundation for their support of this important research, which has the potential to stave off cancer in women with these mutations.”

“The progress being made in early detection and prevention of BRCA-related cancers is extraordinarily promising,” said Gray Foundation founders Mindy and Jon Gray. “Our goal is to accelerate this work by supporting the leading researchers in the field.”

Dr. Cantley is a founder and scientific advisory board member for Agios Pharmaceuticals and Petra Pharma Corporation. These companies are developing novel therapies for cancer.