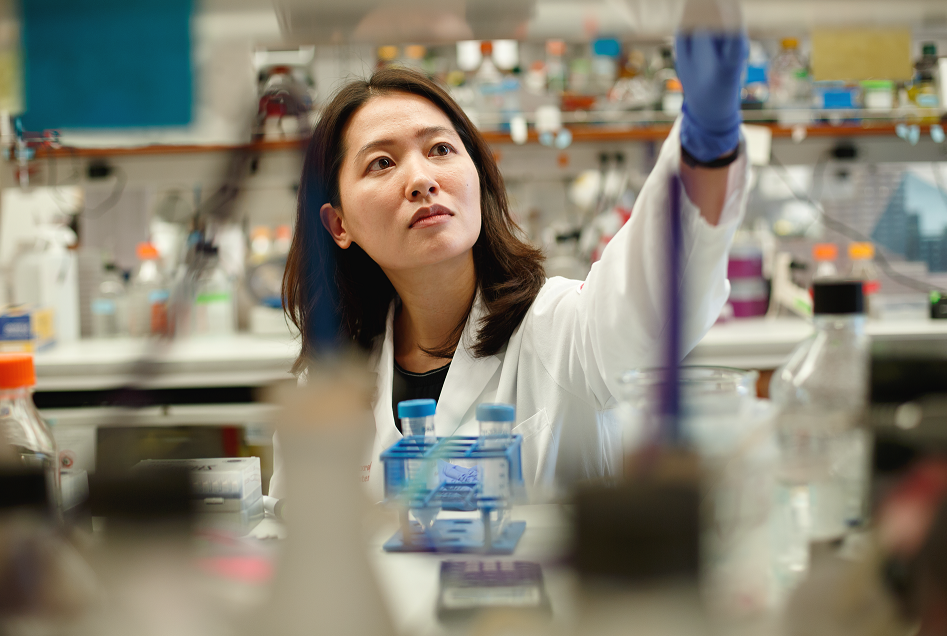 Dr. Gina Lee, a former postdoctoral fellow in the Sandra and Edward Meyer Cancer Center at Weill Cornell Medicine who has now joined the institution’s faculty, has won a 2019 Tri-Institutional Breakout Award for Junior Investigators.

The awards are given annually to up to six outstanding postdoctoral fellows at Weill Cornell Medicine, Memorial Sloan Kettering Cancer Center and The Rockefeller University, with at least one nominee from each institution receiving the honor. The award recognizes young investigators’ research accomplishments, their scientific impact and their promise as future independent investigators. Each winner receives a $25,000 unrestricted prize.

The seed money for the awards was provided by Dr. Lewis Cantley of Weill Cornell Medicine, Dr. Charles Sawyers of Memorial Sloan Kettering and Dr. Cori Bargmann of The Rockefeller University — all winners of the 2013 Breakthrough Prize in Life Sciences. The three institutions have also contributed additional funding for the Breakout Awards, which began in 2014.

“I was very encouraged and excited to receive this honor,” said Dr. Lee, who is now an instructor in pharmacology at Weill Cornell Medicine. “The award means that the science community values my research accomplishments and supports my scientific career. It will help me to boldly pursue my research goals and direction.”

Dr. Lee was nominated for the Breakout Award by her mentor Dr. John Blenis, the Anna Maria and Stephen Kellen Professor of Cancer Research and a professor of pharmacology at Weill Cornell Medicine.

“Gina is an amazing young scientist,” said Dr. Blenis, who is also a member of the Sandra and Edward Meyer Cancer Center. “She asks hard questions, comes up with exciting hypotheses and uses multiple approaches to gain a deep mechanistic understanding of the question she is trying to address. She is not afraid to learn new approaches to solve problems.”

Dr. Lee’s research focuses on how overactive growth factor signaling may contribute to the formation and progression of cancer. She found that the process of RNA maturation is hijacked by cancers, in order to increase energy production and building blocks for cell proliferation and survival.

“My work showed that RNA splicing and translation of key metabolic enzymes are over-activated in cancers, and suggested these processes as a potential therapeutic target,” she said.

In a study published in Cell, Drs. Lee and Blenis and their colleagues showed that a major growth factor signaling pathway called mechanistic target of rapamycin (mTOR) promotes RNA splicing of fat-producing enzymes that make lipids necessary for tumor growth. They also showed that a chemical that blocks this mTOR-driven RNA splicing reduces fat production and slows tumor cell growth in the lab. “We can inhibit fat production in tumors by targeting RNA splicing of lipid-synthesizing enzymes,” Dr. Lee said.

Dr. Lee plans to launch her own lab in the next year. Though he will be sad to lose her as a member of his lab, Dr. Blenis said, he is excited about her future, noting that she is a fantastic mentor and collaborator.

“She has all the ingredients to become a very successful academic scientist,” he said.