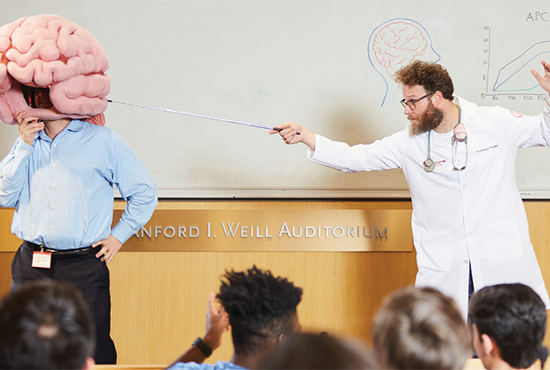 ENTERTAINING AND EDUCATIONAL: Actor Seth Rogen (right) in one of the light-hearted videos he made at Weill Cornel Medicine in collaboration with Dr. Richard Isaacson(left), and the Alzheimer’s Prevention Clinic. Credit: Stephanie Diani

Comic actor Seth Rogen and his wife are open about how Alzheimer’s disease has affected their family: her mother suffers from its early-onset form, and by age 60 she could no longer speak. In 2012, the couple founded Hilarity for Charity, a nonprofit devoted to raising funds for research and engaging millennials in the fight against the disease. And last year, the group partnered with the Alzheimer’s Prevention Clinic at Weill Cornell Medicine and NewYork-Presbyterian/Weill Cornell Medical Center to create a series of light-hearted—but highly informational—videos for the clinic’s educational web portal, Alzheimer’s Universe (AlzU.org). “In the fight against Alzheimer’s, knowledge is power,” says the site’s founder, Dr. Richard Isaacson, an associate professor of neurology at Weill Cornell Medicine, the clinic’s director, and an attending neurologist at NewYork-Presbyterian.

The videos’ content is customized for four groups: students in high school, college and medical school, and residents in neurology.

Many of the segments include lectures by “Professor Rogen”—Seth in a white lab coat—with some light comedy sprinkled in with vital facts about Alzheimer’s, including ways to delay or prevent its onset through a brain-healthy diet (one that includes such foods as whole grains, leafy greens, nuts and fish, and limits salt, saturated fats and red meat), exercise, intellectual engagement, smoking cessation and more. “For decades people have been taught that Alzheimer’s is inevitable—you get older and your brain declines,” Dr. Isaacson says. “But that’s just not true anymore; one of three cases may be preventable. And in the other two-thirds, you could delay the disease by years.”

Launched in 2014, the site hit a million unique visitors last August. But as Dr. Isaacson notes, for four years running, 80 percent of visitors were female and the average age was 57; since Alzheimer’s-related changes can happen in the brain decades before symptoms emerge, it’s vital to reach a broader audience, so young people can make healthy choices early in life. “Seth has a voice that allows us to hit a whole different demographic,” says Dr. Isaacson. “As he said to me, ‘I was taught that smoking can cause lung cancer—but never that it could affect my brain when I was older.’ He can communicate with people that we didn’t have the ability to reach.” The site even offers a whimsical video game in which users help the actor fly, gaining a boost by answering questions about Alzheimer’s. Says Dr. Isaacson: “They’re learning, but we’re trying to make it fun.”

Dr. Isaacson stresses that Alzheimer’s Universe isn’t just educational; it’s also a venue for rigorous, randomized studies on conveying information about the disease. A pilot study of 4,000 people recruited through Facebook during the site’s development phase, published in the Journal of Prevention of Alzheimer’s Disease in 2014, found that online interactive learning methods were indeed effective in teaching about prevention tactics and the disease’s stages. Dr. Isaacson and colleagues are currently refining a paper tracking behavioral changes in 11,000 subjects who visited AlzU.org, and are in the midst of a study following 58,000 participants over the course of a year, assessing whether their use of the educational materials has lowered their Alzheimer’s risk. “I can see seven patients in a day in my clinic,” Dr. Isaacson observes, “but to truly reach people, we need to harness the power of the internet.”