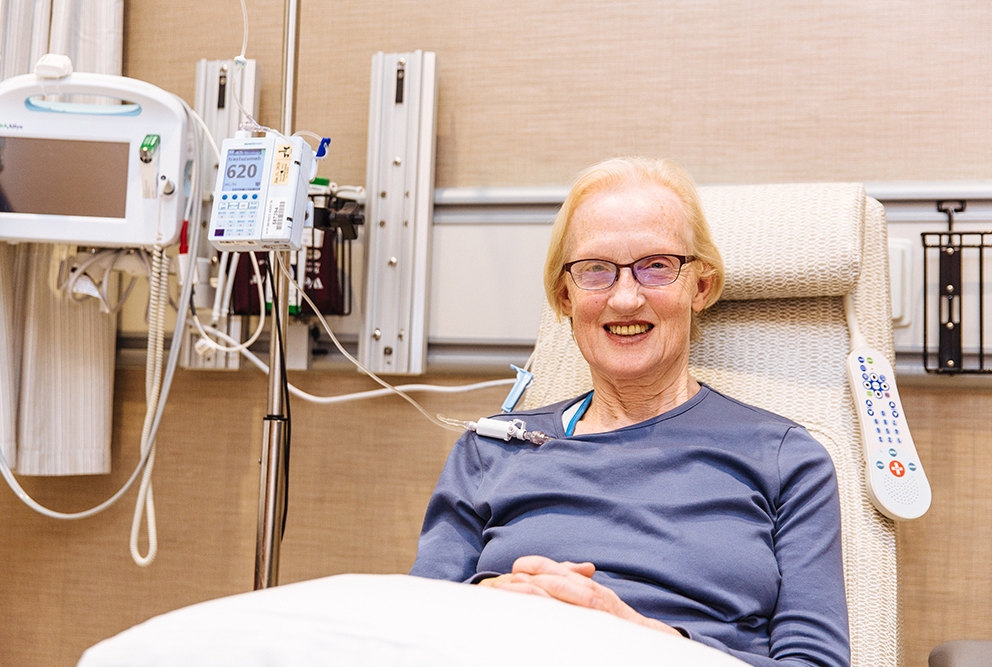 When Ronda Kotelchuck learned she had an aggressive form of uterine cancer, she was frightened and anxious about the road ahead.

Within a week of her January 2012 diagnosis, her doctor, NewYork-Presbyterian/Weill Cornell Medical Center gynecologic oncologist Dr. Kevin Holcomb, performed a hysterectomy and removed her ovaries and fallopian tubes. That July, after a course of radiation, six chemotherapy treatments, and a clean CT scan, Ronda, who was 69 at the time, was  pronounced in remission.

But Dr. Holcomb had warned Ronda that her uterine cancer was a rare and highly malignant type called uterine papillary serous carcinoma, which represents fewer than 10% of uterine cancer cases but accounts for a disproportionate number of deaths. He told her that her cancer had a 20–30% chance of recurring.

Still, Ronda remained optimistic. After all, she was otherwise healthy, without a family history of cancer, other than lung cancer in her mother, who’d been a lifelong smoker.

“My mindset was that this had been a single episode, hopefully not to be repeated,” says Ronda. 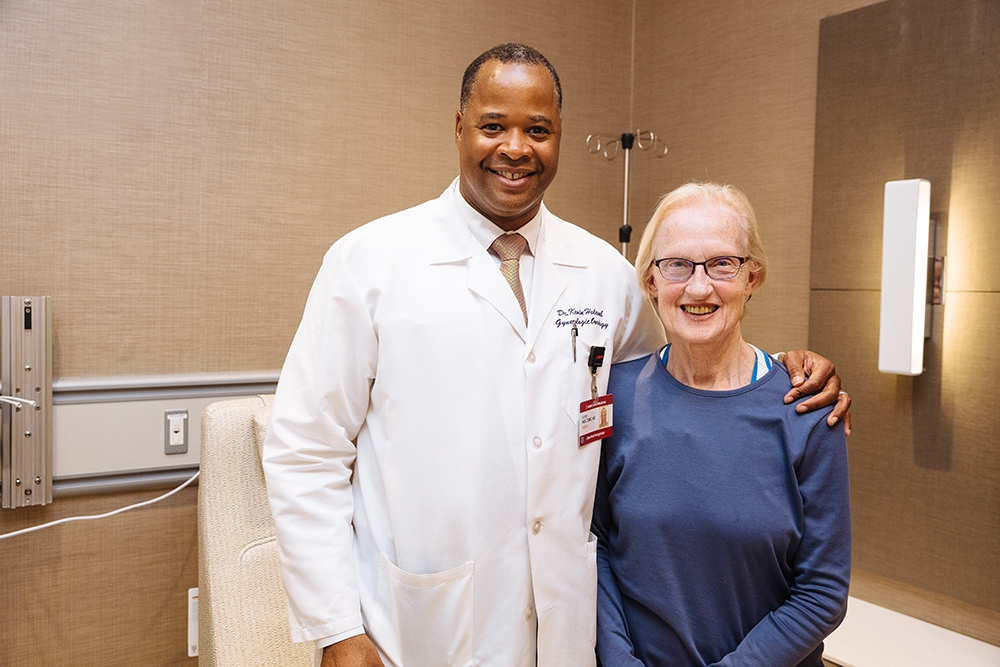 “I dug out of him what he would expect in terms of time,” Ronda recalls of her conversation with Dr. Holcomb. “He said somewhere between six months and two years.”

Ronda and her husband, Dave, left Dr. Holcomb’s office, stunned. But as they processed the news, Ronda found something pushing her forward: resolve.“I am a fighter,” she says, “and I was certainly not going down without a fight.”

A self-described “patient activist” who had founded a nonprofit focused on getting good primary care into underserved communities, Ronda was well-positioned to advocate for herself.

She resumed her chemotherapy while also exploring the world of integrative medicine, adopting a plant-based diet, acupuncture, meditation, and supplements such as vitamin D and probiotics.

“After I learned that in all likelihood I would die in a short period of time, I did everything on earth,” she recalls. “I said to myself, ‘If it makes sense to me at all, I’m going do it because I have nothing to lose.’”

Dr. Holcomb was supportive, asking Ronda to let him know before using any nontraditional treatments — including all medications and supplements — to make sure they wouldn’t interfere with chemotherapy.

“I love Dr. Holcomb, and I love him in part because he’s very reasonable and he respects the patient,” says Ronda. “We really do make decisions jointly.”

Dr. Holcomb, in turn, was equally impressed. “She’s a patient who’s heavily, heavily involved in her own care and an advocate for herself,” says Dr. Holcomb, who is director of gynecologic oncology at NewYork-Presbyterian/Weill Cornell Medical Center and associate professor of clinical obstetrics and gynecology at Weill Cornell Medicine. “She gets as much information as possible and makes good decisions.”

At first, the chemotherapy appeared to be working: After three monthly treatments, Ronda went back into remission and stopped her chemotherapy. But a half year later, in 2014, tumors reappeared.

Ronda resumed chemotherapy once again, but since she had already had so many treatments at very high doses, her team at NewYork-Presbyterian was concerned she might develop an allergic reaction. As a precaution, they slowed down the run rate of her chemotherapy, which meant that each infusion session lasted a full day instead of four hours.

“I would be the first to arrive in the morning at 8:30 and I would be the last out at night at 7:30,” Ronda recalls. Side effects such as nausea, exhaustion, and leg pain became the norm.

When her tumors began to grow despite ongoing chemotherapy, Ronda and Dr. Holcomb both felt that it was time to explore a new path. During this time, Ronda learned of a new precision medicine program at Weill Cornell Medicine called the Caryl and Israel Englander Institute for Precision Medicine, which uses innovative tools like genomic sequencing to guide a patient’s individualized treatment. Dr. Holcomb wanted to take advantage of the new program, and invited Ronda to participate. She readily agreed.“When you’re talking to a patient and telling them that there’s no cure for what they have, I personally am very open to trying things outside the box,” explains Dr. Holcomb.

A specimen of Ronda’s original tumor, which the hospital had collected during her surgery and preserved, was sent to the Englander Institute for analysis. The hope was that clinicians there could analyze the tumor’s genetic makeup with the goal of finding a cancer-causing target unique to her tumor that might respond to a more effective and less toxic drug regimen. 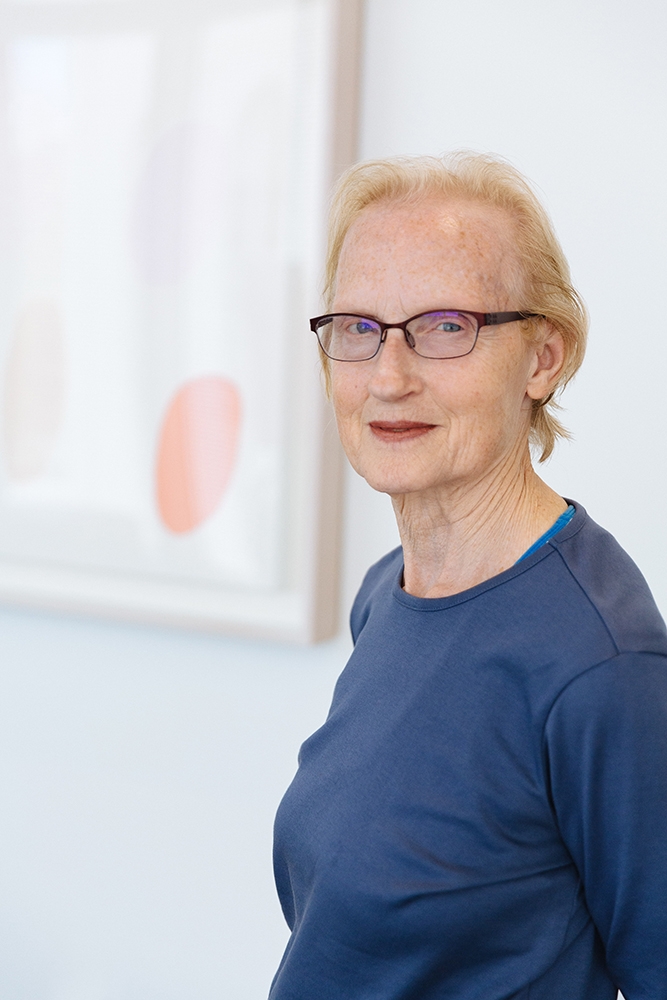 The genetic sequencing revealed that a major driver of Ronda’s cancer was a gene called HER2/neu, which is linked to an aggressive form of breast cancer.

Patients with HER2-positive breast cancer are often treated with a drug called trastuzumab (Herceptin), which blocks HER2 function, thereby impeding the growth of cancer cells.

About 30% of patients with Ronda’s type of uterine cancer have a tumor with this genetic makeup, according to Dr. Holcomb. However, Herceptin isn’t approved by the Food and Drug Administration to treat uterine cancer.

Although a 2018 study found a survival advantage associated with Herceptin for patients with recurrent uterine cancer, also called endometrial cancer, no such treatment recommendation existed at the time Dr. Holcomb suggested Ronda start using it in 2015, Dr. Holcomb notes. “It’s not the first time that someone’s thought to use it,” he says, “but there was not a recommendation out there to use Herceptin in endometrial cancer.”

Even though Dr. Holcomb had never tried it before, it was all that was left in their arsenal. He and Ronda both felt it was worth a shot.

So, in February 2015, her team added Herceptin to her regimen, which she received as an infusion every 21 days along with her chemotherapy.

As it turned out, this innovative treatment had a pronounced effect: Ronda’s tumors stabilized, and for the following two years were held in check. But after a total of 42 rounds of chemotherapy over four years, Dr. Holcomb felt strongly that Ronda’s body needed a break. Her team recommended she stop chemotherapy but stay on Herceptin.

A New Lease on Life

Something seemingly miraculous happened over those next few months: Her tumors continued to shrink.

By the following May, nine months later, there was no sign of cancer, and Ronda was officially in remission. She has remained that way for the two years since. “It was beyond our expectation,” Dr. Holcomb says.

“It almost seems like the chemotherapy was holding back the effect of the Herceptin and keeping her from going into remission,” says Dr. Holcomb, noting that more research is needed.

Ronda was elated. “I’d gotten all prepared to die,” she says, “and now I was stunned with the prospect of getting ready to live.”

Today, Ronda returns to the infusion center at the NewYork-Presbyterian David H. Koch Center every 21 days for her Herceptin treatment. Unlike chemotherapy, which caused hair loss, muscle aches, crushing fatigue, and nausea, she has experienced no side effects whatsoever.

Now 75 and a grandmother of six, Ronda says, “I feel terrific. It’s a piece of cake compared to chemotherapy.” She spends her days exercising, walking 4 to 5 miles most days, practicing yoga, reading, writing, serving on boards of three nonprofit organizations, and spending as much time as possible visiting family in Vermont and Massachusetts.

“Family means everything to me,” she says, “so I put a very heavy priority on spending time with my two daughters and six grandchildren.”

“We’re out in uncharted territory,” says Dr. Holcomb, adding that without Herceptin, he’s convinced Ronda wouldn’t be alive today. “We are hoping this lasts forever but we don’t know.”

The Future of Cancer Care

Today, Dr. Holcomb’s gynecologic oncology division routinely sequences tumors and does it earlier in the course of a patient’s care in hopes of improving their odds of finding a successful treatment.

“This is an example of the power of precision medicine,” says Dr. Olivier Elemento, director of the Englander Institute for Precision Medicine. “I think it’s just a matter of time before every cancer patient will have their genome sequenced. It’s the future of cancer care.”

Dr. Elemento adds, “This is a very good example of how we’re starting to think about cancer now. It’s not so much about where the cancer is in the body, like breast or uterine cancer, but what kind of genetic mutations are driving the cancer.”

Dr. Holcomb confesses that “I was a bit of a skeptic, to be perfectly honest, about this precision medicine concept. But Ronda’s case got me excited.” And, he adds, “if I had never sequenced Ronda’s tumor, I would have never used Herceptin.”

As for Ronda, she’s grateful for the new lease on life. “I am so lucky to be around, and I don’t kid myself about being ‘cured’ of cancer,” she says. “I just am very grateful for every day and every month and every year, and the opportunity for more time.”

Dr. Olivier Elemento is the founder of Thucydx, LLC and holds an equity interest in OneThree Biotech. Both companies focus on technologies related to precision medicine.