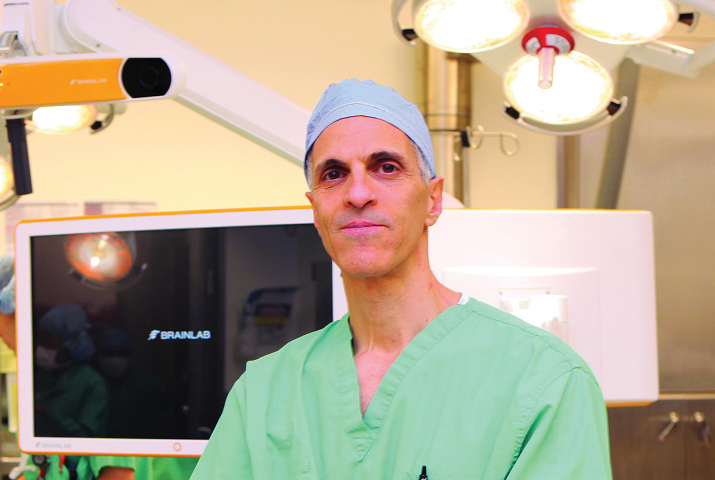 Diffuse Intrinsic Pontine Glioma (DIPG) is every parent’s worst nightmare: a rare and incurable type of brain cancer that affects young children. Surgery isn’t an option because DIPG tumors infiltrate the brainstem, which controls vital functions such as breathing and heartbeat. Standard intravenous chemotherapy also doesn’t work because chemotherapy drugs generally don’t cross efficiently from the bloodstream to the brain. Most DIPG patients survive for less than a year after diagnosis. In the late 1990s, Dr. Mark Souweidane, a professor of neurologic surgery at Weill Cornell Medicine, and a neurological surgeon at NewYork-Presbyterian/Weill Cornell Medical Center and Memorial Sloan Kettering Cancer Center, decided to make curing this cancer his “Holy Grail”—and his progress since then has been impressive.

What first set you on this quest more than 20 years ago?

First, the fact that we neurosurgeons and neuro-oncologists hadn’t made any impact on DIPG for as long as I’d known about the disease. Kids were dying of a relatively small tumor that would have been treatable in other parts of the brain. It made me think we weren’t attacking DIPG in the right way.

Second, I learned of a new, still-experimental technique called convection enhanced delivery (CED), the principle of which would allow us to apply cancer drugs directly to the tumor through a tiny tube, or microcannula, inserted through the skull.

How did you approach the problem in preclinical studies?

There was no animal model for DIPG at the time, or even a cell culture model. We just didn’t have the usual tools for developing a new treatment. So, we initially focused on the feasibility of putting a microcannula, .008 inches in diameter, into the brainstem of a normal, healthy mouse, and then using it to infuse fluid at a consistent rate, to make sure we could deliver the necessary volume of fluid to the brainstem for a treatment without harming the rodent.

That was a huge effort—I was an M.D. with no lab experience. I also had to scramble to find a way to finance this research. But I really believed strongly in this because convection enhanced delivery seemed like the perfect match for this type of tumor.

By the early 2000s we had demonstrated the safety of this basic approach in mice. We then started investigating a variety of therapeutic agents to see which ones would kill cultured DIPG cells most effectively, without being toxic to the mouse brainstem when infused via CED.

Ultimately for an initial clinical trial, which we conducted from 2012 to 2016 in 28 kids with DIPG, we decided to use an agent called I24I-8H9. This is a radioactive iodine atom conjugated to a mouse antibody that sticks to a receptor found on DIPG tumor cells. Essentially it homes in on the tumor cells and kills them with the radiation from the iodine atom. The agent had already been used safely for children with a different brain cancer called neuroblastoma. But we would be the first to deliver it via CED and to the brainstem. And we didn’t really know at the outset what doses would work against the tumor, what doses would be too toxic—so it was unnerving. 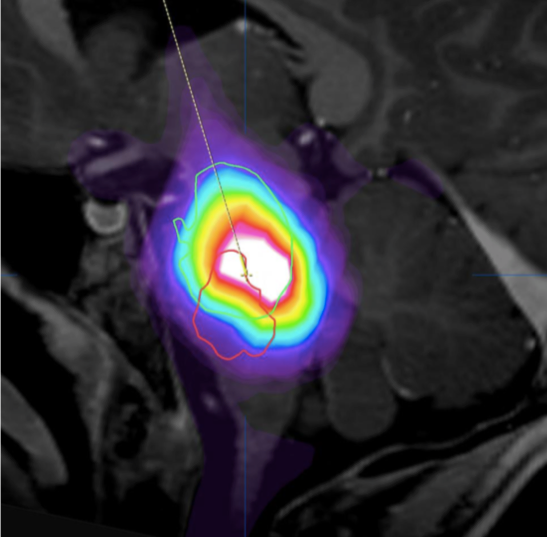 Yet those clinical trial results were very promising…

We hesitate to claim a therapeutic benefit because the trial was designed to test the safety of the technique and the best dose of the therapeutic agent, and we didn’t have a control group of untreated patients for comparison. But past studies of DIPG kids suggest a median survival of about 10 months, and for our study the median survival is approaching 16 months. Two patients are still alive, years after their treatments, which is otherwise unheard of for DIPG.

We also had a great safety record in this trial, with no major treatment-related toxicities. Traditionally, cancer drugs are given intravenously and cause toxicity to multiple organs and tissues, such as the bone marrow and immune system, and that limits the doses that can be given. With CED we can use much higher, more effective doses because we’re hitting very little beside the tumor—the concentration of the drug at the tumor is over 1,000 times greater than it is in the rest of the body.

So, I’m extremely encouraged with the results so far, enough to want to invest a lot more effort to push this forward.

How are you following up?

We’re working, for example, with the Pediatric Brain Tumor Consortium to set up a multi-center trial. We’re collaborating with UC San Francisco on a pilot study using CED to deliver a different anti-cancer agent to DIPG patients. We’re exploring other agents as well. Industry is knocking on the door. Medical device design companies are knocking on the door.

I’ve never felt more optimistic that within my career this disease will become curable.