Fewer Men of Color are Pursuing Medicine—But Dr. Maurice Hinson, Who Was the First in His Family to Go to College, Aims to Change That 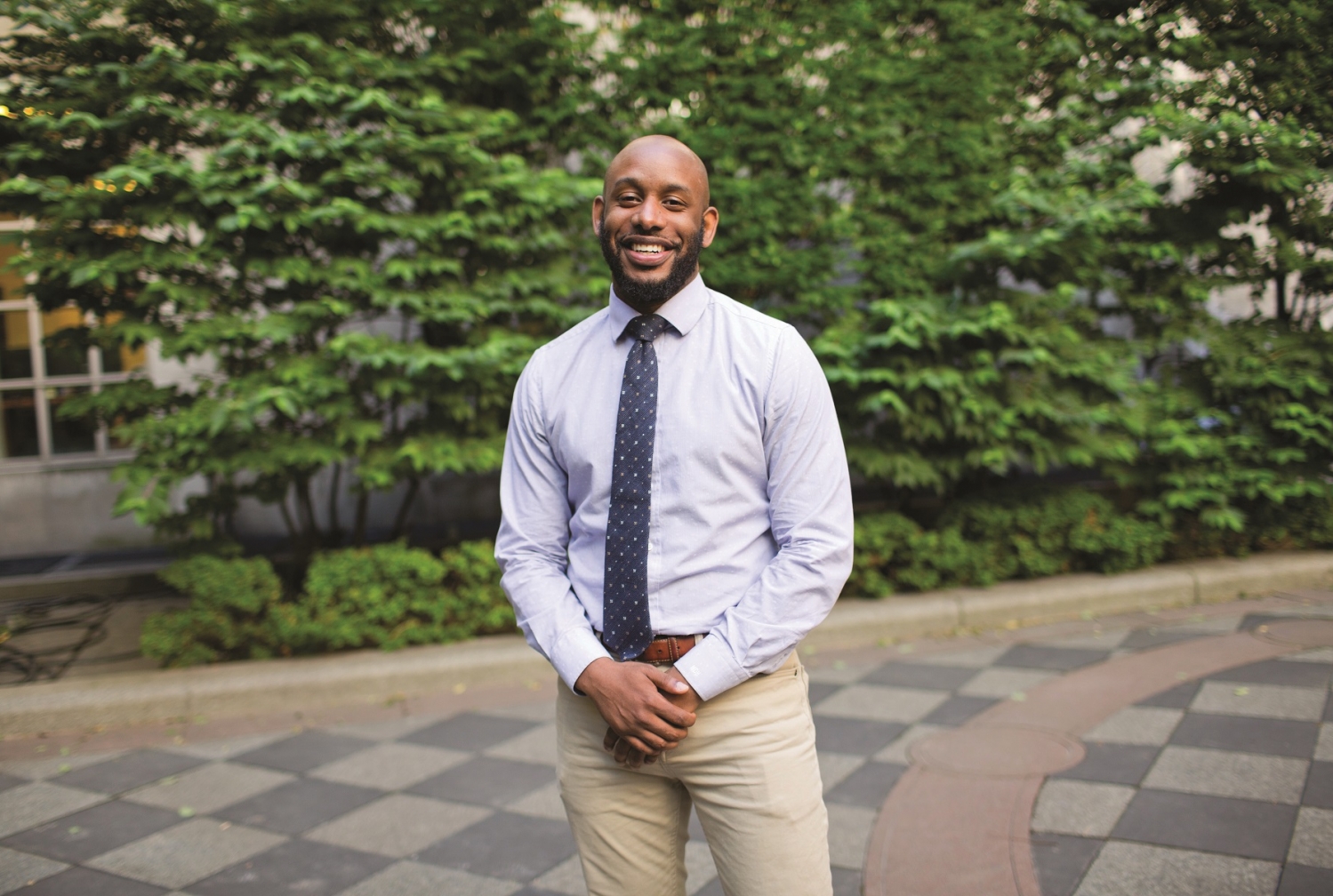 For African American internist Dr. Maurice Hinson it has happened more times than he can count. He’ll walk into a hospital room, and—despite his white coat—the patient will assume that he’s there not to treat them, but to draw blood or transport them for a test. “I’m not offended by it; these are respectable positions,” Dr. Hinson says. “And in a weird way it’s empowering, because it affords me the opportunity to demonstrate that black doctors do exist—and we’re good doctors.” But as he admits, it’s also disheartening. “It shows you that patients still aren’t used to seeing physicians of color—which points to the fact that we need to do a better job at increasing the number of under-represented minorities in medicine. We still have a long way to go.”

Dr. Hinson, who recently completed his internal medicine residency at NewYork-Presbyterian/Weill Cornell Medical Center and is now an attending physician in the observation unit at NYU, has been working to bring those numbers up. In 2016, he founded Weill Cornell Medicine’s Black and Latino Men in Medicine Initiative—and was thrilled that more than 40 students, trainees and faculty showed up for the first meeting. It began as a forum for networking, socializing and mutual support; they’d discuss relevant issues over pizza and beer. But Dr. Hinson and his colleagues have widened their ambitions. Last spring, the group held a day-long conference, “Closing the Representation Gap,” which drew more than eighty people—from Weill Cornell Medicine, NewYork-Presbyterian, Columbia, Memorial Sloan Kettering Cancer Center, Hunter College and other institutions—to Uris Auditorium. The agenda included a keynote speech by the head of a national diversity-in-education organization, as well as brainstorming sessions on how to increase the number of minority male doctors (for example, by offering implicit bias training for people who make admissions decisions). The group will continue after Dr. Hinson’s departure, with a men’s health fair and a mentoring mixer planned for the fall. “We need to offer more support for those who get to the point where they’re applying to medical school,” says Dr. Kevin Holcomb, an associate professor of clinical obstetrics and gynecology, interim chair of obstetrics and gynecology, and the group’s faculty adviser, “and also do more to feed the pipeline—to open up opportunities for exposure to careers in medicine for young men who might not consider it otherwise.” 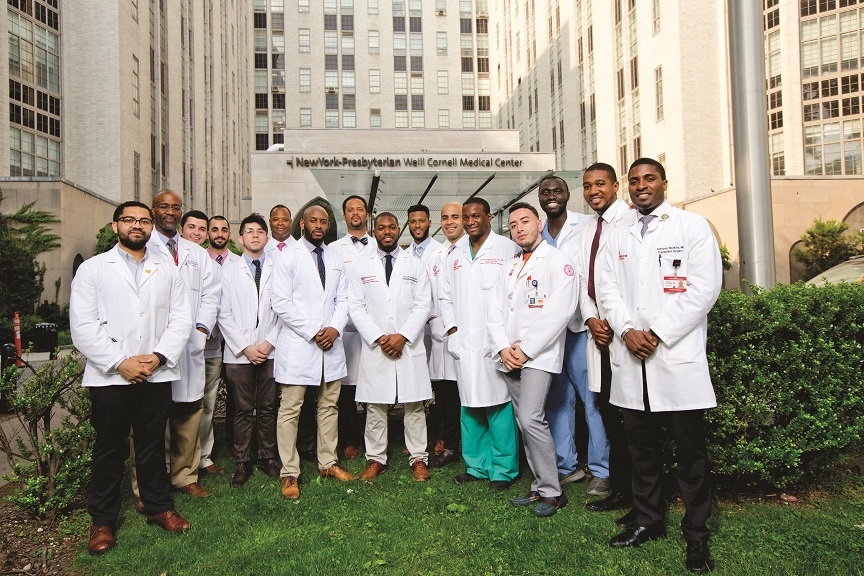 Dr. Hinson (seventh from left) outside NewYork-Presbyterian/Weill Cornell Medical Center with fellow members of the Black and Latino Men in Medicine Initiative, and (opposite page) on the WCM campus last summer.

Why focus on men? As Dr. Hinson and Dr. Holcomb point out, their MD numbers have not only failed to increase in recent decades—they’ve actually declined. In 2016, the American Association of Medical Colleges (AAMC) released a report noting that in 1978, 1,410 black men applied to med school and 542 matriculated; by 2014, those numbers had dropped to 1,337 and 515, respectively. “No other minority group has experienced such declines,” the report stated, adding that, “The inability to find, engage and develop candidates for careers in medicine from all members of our society limits our ability to improve healthcare for all.” Black women, by contrast, have seen significant gains: as the AAMC has reported, between 1986 and 2015 the number of black female graduates increased by 53 percent—compared with a decline of 39 percent for men. (While that report didn’t include raw numbers of female graduates during those years, other AAMC statistics underscore the current gender disparity; for example, 3,234 black women were enrolled in medical school in 2015–16, compared with 2,271 black men.) Contemplating the reasons for the male numbers, the AAMC cited “unequal K–12 opportunities, the absence of mentors, negative public perceptions of black men and lack of financial resources.”

Dr. Hinson himself faced some of those challenges as a youth—financial constraints in particular—but other advantages helped him beat the odds. He was raised in Philadelphia by his father, who’d dropped out in the 11th grade and worked for the city in street maintenance and sanitation, but was a strong proponent of education who forbade his son to bring home C’s. (Dr. Hinson’s mother, a certified nursing assistant, struggled with drug addiction for much of her adult life; she’s now sober and doing well.) When Dr. Hinson was young, their apartment building was owned by a surgical oncologist, who had an outpatient clinic across the street; when Dr. Hinson’s dad had to work, he’d  drop him off to play  with the daughter of a staffer. “They’d dress us up in white coats and stethoscopes,” he recalls. “My earliest memories are me in this white coat dragging on the floor, listening to people’s heartbeats. That was the first thing that exposed me to medicine, that jump-started my fascination with the human body.” When he was six or seven, a neighbor who was a physician’s widow gave him her late husband’s medical books. “At that time I couldn’t understand the words,” he says, “but I’d flip through the pages.”

When Dr. Hinson was around eight, he and his dad had to move because their building in the relatively affluent Society Hill neighborhood was sold—and housing wise, he says, “it was all downhill from there,” with the family relocating more than a half-dozen times. “They weren’t the best areas by any means,” he says. “Drugs were always a big thing, but my pop tried his best to keep me away from that.” He attended a program for gifted elementary school students and a magnet high school for science and engineering, then earned a BA in neuroscience from Johns Hopkins and spent two years doing neonatology research at Children’s Hospital of Philadelphia. But halfway into his second year of medical school at Drexel University, he found himself in danger of failing three courses—in large part because he was working overnight as a parking valet to support himself. He quit the job, logged long hours in the library and passed.

While at Johns Hopkins, Dr. Hinson started a group that brought minority male undergrads to a Baltimore high school to mentor students; he launched a similar effort at Drexel, offering campus visits and tutoring to encourage Philly high schoolers to consider careers in medicine. Starting the Weill Cornell Medicine initiative—for which he was honored last spring with one of the institution’s 2018 Pioneer in Diversity Awards—was a natural evolution of his long-standing commitment to empowering other young men of color. “He is unbelievably dedicated to this topic,” says Dr. Holcomb. “He’s passionate not only about the numbers of black and Latino men in medicine, but in improving health outcomes and decreasing disparities in the black and Latino community, and he sees increasing the [physician] numbers as critical to that.” Dr. Hinson, he says, “is a doer, not a talker. You mention something to him once, and the next time you speak to him he’s going to give you his plan—and the time after that, he’s telling you how he got it done.”