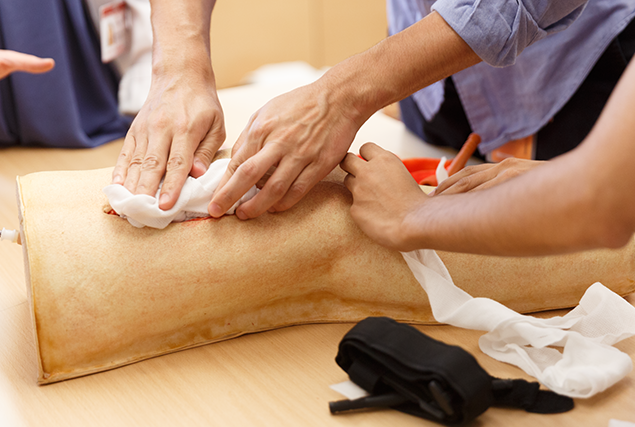 First-year Weill Cornell Medical College students practice how to pack wounds on a mannequin during a Stop the Bleed training on Aug. 20. All photos: Ashley Jones

First-year Weill Cornell Medical College student Yende Grell is not yet a medical professional, but could have easily been mistaken for one this summer when she was working as a medical assistant at an orthopedic practice.

“I wore scrubs on the bus to work and sensed that people felt I could step in if there were an emergency,” the 24-year-old said. “But I wasn’t ready.”

Now she is empowered to do just that after learning basic bleeding-control techniques on Aug. 20, the first day of orientation for the 106 students in Weill Cornell Medical College’s Class of 2022. The workshop, which took place in the Weill Education Center and is part of the American College of Surgeons’ Stop the Bleed program, trained students on how to pack wounds, deliver continuous pressure and apply tourniquets to help people who have been injured and are bleeding severely. 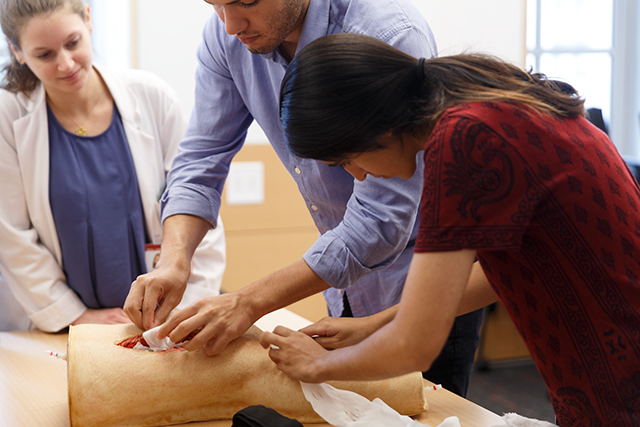 “The need for immediate help in a bleeding emergency can’t be overstated, whether the cause is an automobile or pedestrian accident, severe fall, gunshot or stab wound, or even a terrorist attack,” said Dr. Mayur Narayan, an assistant professor of surgery (interim) at Weill Cornell Medicine and a trauma surgeon at NewYork-Presbyterian/Weill Cornell Medical Center who led the training. “This program is an outstanding tool for saving lives. We want to be the first medical school in the country where every student and faculty member is certified in this vital course.”

In large, crowded cities such as New York, the average response time for first responders is between seven and 10 minutes, but a person who is seriously bleeding can die from loss of blood within five minutes. So bystanders are often in the best position to take immediate action to preserve life until professional help arrives, Dr. Narayan said.

As a trauma surgeon, Dr. Narayan has seen the value of Stop the Bleed first-hand. His commitment to improving trauma care is also personal: His aunt and uncle both died from injuries sustained from a car accident in India, all because medical professionals missed the signs of internal hemorrhage. That tragedy motivated Dr. Narayan to provide the best trauma care to patients in need. Now with Stop the Bleed, he’s taking it a step further, teaching physician trainees, nurses and the public how they can help.

Stop the Bleed comprises simple, but powerful steps: First, call 911 or tell someone else to call. Second, ensure your own safety. “You can’t help someone if you’re in danger yourself,” Dr. Narayan said. Third, after you find the source of bleeding, cover the site with a clean cloth, such as a shirt, and apply pressure by pushing directly and continuously on the wound with both hands, arms locked as if doing CPR but without active compressions. If the wound is large and deep, stuff the clean cloth into the wound, still delivering continuous pressure to the site. If the wound involves an extremity, and a trauma kit is available, apply a tourniquet above the wound until first responders arrive and take over. 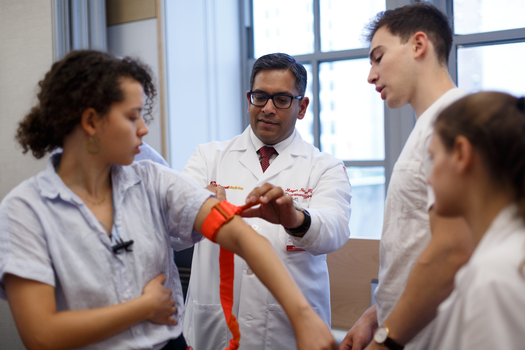 After learning these steps in a short lecture, Weill Cornell’s first-year students divided into small groups and practiced the bleeding-control techniques on mannequins and each other, under the supervision of second-year medical students already trained in Stop the Bleed who are certified as trainers. “We use a train-the-trainer model to empower students and create a bond between those from different years,” Dr. Narayan said.

Paolo De Angelis, a second-year medical student who led one of the hands-on sessions, enjoyed the opportunity to pass along his knowledge. “I entered medicine to help save lives. Stop the Bleed can do just that,” he said. “The fact that I can teach the program to my younger colleagues is a bonus.”

First-year student Eseosa Odigie is excited to pay it forward and train others in these techniques—which is one of the national program’s goals. “I intend to teach this to my family,” she said. “Two of my siblings are engineers and a third is in computer science. This is something they need to know.”

“Whether it’s in New York City or in India, Weill Cornell Medicine is committed to doing all we can to save lives,” Dr. Narayan said. “I’m honored to be part of such a caring institution.”