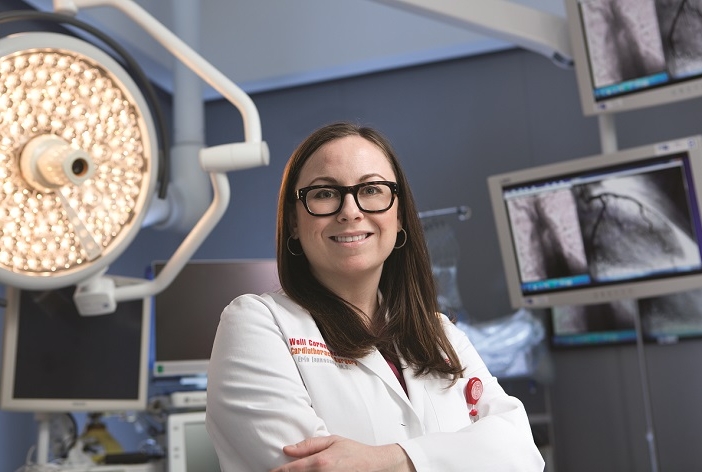 Growing up in the San Francisco Bay Area, Dr. Erin Mills Iannacone often spent Sunday mornings at the hospital with her father, an orthopaedic surgeon, as he checked on patients before church. Back then, she wasn’t planning to follow in his footsteps, instead thinking about becoming an astronaut or a psychologist. But when she was home during a break from her undergraduate studies at UCLA, Dr. Iannacone watched her dad perform a hip replacement—an experience she describes as a “lightning bolt” moment that helped set her career path. “I realized how exciting surgery was—you’re actually fixing people with your hands,” she recalls. “And then seeing the patients in his office afterward, how much happier they were; being able to improve people’s quality of life was a major motivating factor.”

Today, Dr. Iannacone is a surgeon, too, although she mends hearts—treating aortic aneurysms, repairing damaged arteries, replacing diseased valves and more. She’s also a trailblazer: the first female cardiothoracic surgeon at Weill Cornell Medicine and NewYork-Presbyterian/Weill Cornell Medical Center. Dr. Iannacone is one of the few women in the United States who practice in the specialty, which requires at least seven additional years of training after medical school, one of the longest in medicine. The American Board of Thoracic Surgery (ABTS) certified its first three female diplomats in 1961, with the total number of women reaching ten by 1980. Although that figure has grown to more than 200 today, women still account for less than five percent of practicing cardiothoracic surgeons—with even fewer choosing cardiac surgery as their primary specialty. The disparity, however, never deterred Iannacone from pursuing her dream. “There are very few women in my field—that is definitely true—and I knew this as I moved forward in my training,” says Dr. Iannacone, also an assistant professor of clinical cardiothoracic surgery. “Cardiac surgery just happened to be the only field in which I could imagine myself fulfilled.”

After earning her medical degree at Oregon Health Sciences University, Dr. Iannacone completed a five-year residency in general surgery at UCSF Fresno, where she handled a heavy load of trauma cases that included gunshot wounds, burn injuries and car accidents. In 2014, she moved east for a two-year cardiothoracic fellowship at Weill Cornell Medicine. She stayed for another year to complete an advanced cardiovascular and aortic surgery fellowship under Dr. Leonard Girardi, MD ’89, chairman of the Department of Cardiothoracic Surgery and the O. Wayne Isom Professor of Cardiothoracic Surgery, before being recruited to the faculty. Dr. Girardi says he was impressed by how Dr. Iannacone never accepted “anything less than perfection” from herself or those around her, a crucial quality in a cardiac surgeon. “With heart surgery, when you have errors of a millimeter or two, that’s a problem,” he says. “Understanding the nuances of critical care also makes a huge impact on outcomes. We deal with conditions that are potentially fatal or life altering. You need a commitment to detail and the drive to stay on top of things.”

Dr. Girardi points to a recent case that Dr. Iannacone skillfully handled: a man in his early 50’s with an aortic dissection, or tear in the largest artery carrying blood from the heart. The emergency operation to repair the rupture was successful, but the patient later developed an unusual complication involving decreased blood flow to the spinal cord, something that could have left him paralyzed from the waist down. Dr. Iannacone immediately ordered diagnostic tests and determined that increasing his blood pressure with medication would solve the problem, and the patient recovered. “Erin doesn’t sit around and wait for things to play out. She took control and was involved at every step,” says Dr. Girardi. “Within a few days, this guy was walking and talking and feeling better than when he came in. I don’t think everybody gets that job done.”

In addition to her duties at the hospital and medical college, Iannacone is leading the charge to establish a program at Weill Cornell Medicine for the surgical treatment of chronic thromboembolic pulmonary hypertension (CTEPH). The disease results from repeated or unresolved clots in the blood vessels of the lungs, causing shortness of breath and leading to possible heart failure and death. Though CTEPH is identified in only about 5,000 Americans each year, most experts agree that the condition is widely under-diagnosed. It is curable, however, with a complex procedure called pulmonary thromboendarterectomy (PTE), in which doctors suspend heart and blood circulation while they clear the pulmonary arteries of any blockages. But PTE has never been done at Weill Cornell Medicine, so patients flagged as candidates for the surgery are transferred elsewhere. Determined to change that, Dr. Iannacone spent a month last fall training with specialists at UC San Diego Health, which boasts more successful PTEs than any other medical center. She expects to move forward with the first at Weill Cornell Medicine before year’s end. “Our goal is to be able to perform this here so our patients can stay with us,” she says. “We do a great job of providing the best cardiac care, but it’s important that we continue to expand what we offer.”

So why haven’t more women chosen to specialize in cardiothoracic surgery, as Dr. Iannacone has? The reasons include worries about work-life balance, given the rigorous, lengthy training and often-grueling surgical schedule—coupled with the fact that women still often shoulder the bulk of family caretaking responsibilities, both for children and for aging parents. In 2012, the Annals of Thoracic Surgery published a survey of more than 90 percent of the 204 living female diplomats of the ABTS, noting that among the younger women, there were nearly twice as many general thoracic surgeons as adult cardiac or congenital heart surgeons—attributed partly to what is thought to be a more flexible lifestyle. The report cited other studies that found that overall, female surgical residents tend to be concerned with how pregnancy and maternity leave might fit into a demanding training program, as well as their impact on job security and future opportunities. “There is a perceived need for more female mentors in cardiothoracic surgery,” it noted, “which is contingent  on increased numbers of satisfied women in the field and especially in academics, where there is increased exposure to medical students and residents.” It underscored that need by citing a study that found that among residents with mentors, 67 percent go into the same field as that mentor.

The importance of mentorship in recruiting women into the field was also highlighted in a 2016 study in the same journal, which surveyed 354 cardiothoracic surgery residents, both men and women. “Most female CT surgeons are satisfied with their career choice,” it said, adding: “However, additional challenges remain.” Though the study found that women now account for 20 percent of cardiothoracic residents—a significant uptick compared with the five percent for full-fledged surgeons—it reported that women felt less prepared technically, were less likely to pursue research during their careers, and were less likely to be married and have children than their male counterparts. Iannacone says she’s lucky to have had supportive mentors at Weill Cornell Medicine—and an understanding husband who “takes care of nearly everything in my life outside of work, so I can be completely focused on my patients.” In her professorial role, she also hopes to inspire the next generation of female physicians, calling her glass ceiling-breaking appointment “the greatest honor.” Says Dr. Iannacone: “I’m thrilled to provide an example to other women to show them that this kind of career is possible.”