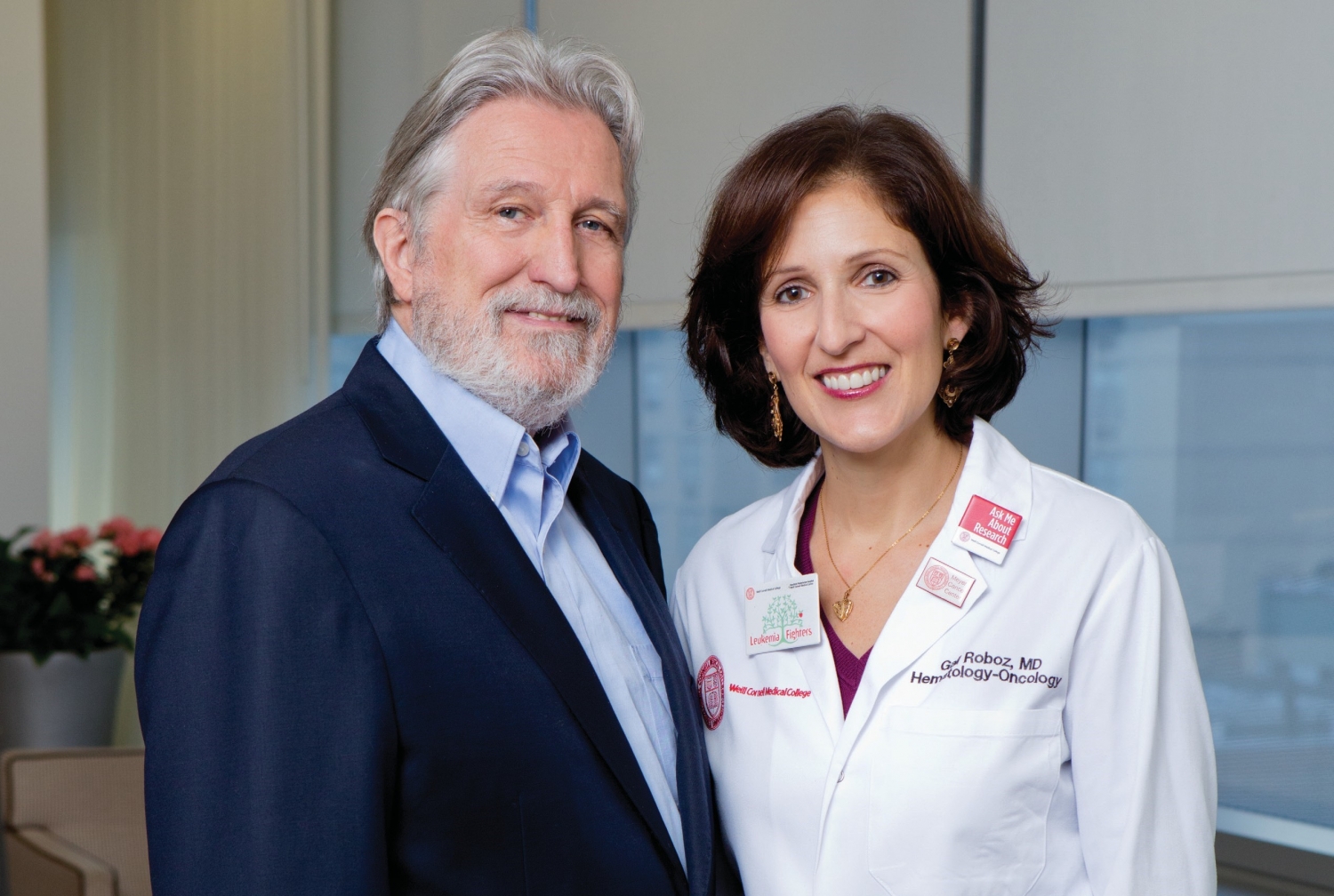 For Ralph Hills, getting ready for minor back surgery in December 2014 was no big deal. At 71, the computer consultant was physically fit—regularly playing golf and tennis—and his heart and lungs were in good shape. So when he went for a routine pre-operative blood test, he never expected to get a call referring him to an oncologist near where he lives in suburban Connecticut. It turned out Hills had acute myeloid leukemia (AML), a fast-moving cancer of the blood and bone marrow. “I was told I should go home and get my affairs in order,” he says.

But Hills sought a second opinion from Dr. Gail Roboz, a professor of medicine and director of the Clinical and Translational Leukemia Program at Weill Cornell Medicine and a hematologist/oncologist at NewYork-Presbyterian/Weill Cornell Medical Center. At first, she recommended aggressive chemotherapy. However, the night before he was to start treatment, Dr. Roboz asked Hills if he’d instead be willing to participate in a clinical trial on an experimental drug called enasidenib. (Dr. Roboz has served as a consultant for Celgene, which sponsored the trial.) Hills was soon taking four pills each day—and three years later, he’s in complete remission. “I’ve never had chemo. I’ve never been in the hospital,” he says. “I’m the luckiest person I know.”

Early data from that trial showed such a positive overall response to the drug—including putting 18 percent of relapsed patients into complete remission—that enasidenib was fast-tracked for FDA approval, which was granted in August 2017. It’s not the only one: since April 2017, the agency has signed off on the use of four other leukemia drugs that improve survival— an unprecedented number in so short a time frame—and others are in the pipeline. That means there are now more options than ever for patients with leukemia, a disease that has seen few clinical advances in the past 40 years. Says Dr. Roboz: “It’s an incredibly exhilarating time.”

AML is the most common form of leukemia in adults, with more than 21,000 new cases diagnosed and over 10,000 people dying from it each year. The prognosis for older patients is particularly dire; those over 65 have an overall five-year survival rate of less than 10 percent. But in Hills’s case, Dr. Roboz ordered a genetic profile and discovered he had a mutation of a gene known as IDH2. In eight to 19 percent of AML patients, an altered IDH2 gene blocks typical white blood cell development; enasidenib inhibits that mutated gene and promotes normal cell growth. The medicine made Hills feel sick at first; he was fatigued, had trouble eating, and lost 45 pounds. “There was very little hope, but I never gave up,” he says. “And after three months, the leukemia cells started to disappear.” By May 2015, his cancer was in remission.

Some other newly approved drugs take different approaches. Inotuzumab ozogamicin—also approved by the FDA in August—is for adults with acute lymphoblastic leukemia (ALL). This therapy attaches a chemotherapy drug to monoclonal antibodies—molecules designed to target certain proteins such as those found on cancer cells—with the goal to deliver the chemo directly to tumors. Another new AML medication, CPX-351, packages two commonly used chemotherapies into one formula with improved delivery. And yet another drug now in clinical trial at Weill Cornell Medicine—AG221—works in a similar manner to the one that Hills is taking, but focuses on a different gene mutation. Michel Lemoine, a 75-year-old retired chef who lives in Manhattan, entered that trial shortly after Dr. Roboz diagnosed him with AML in July 2015. Three months later, with no side effects, he also went into remission and continues to be in good health. “It’s a miracle, honestly,” he says.

In addition to new leukemia medicines, scientists are developing techniques to pick up minimal residual disease (MRD), or tiny cancer cells that remain in the body even after treatment. The number and character of these cells are indications of how well a therapy has worked—particularly with AML, which has a high relapse rate. Physicians traditionally assess MRD by viewing cancer cells under a microscope, but there’s an urgent need for more sensitive tests. In May, Dr. Duane Hassane, an assistant professor of computational biomedicine and director of leukemia genomics at Weill Cornell Medicine’s Englander Institute for Precision Medicine, and colleagues published an article in the Journal of Molecular Diagnostics describing a method that can identify residual leukemia cells in patients by looking for a mutation in a gene called NPM1—a sign of remaining cancer, since normal cells don’t have NPM1 mutations. The approach was found to detect both common and rare forms of NPM1 mutations, making this kind of testing applicable to more patients. Dr. Hassane isn’t stopping there: his lab is involved in a multi-center study that plans to monitor MRD in hundreds of AML patients over the next several years as they undergo care, using advanced DNA analysis that includes the NPM1 test. The theory is that better outcomes may result if doctors have information that allows them to adjust an individual’s therapy throughout the treatment process. “If we know how the disease persists and evolves before any clinical signs of relapse, it may present new opportunities for highly personalized treatments,” says Dr. Hassane.

Dr. Roboz cautions that these innovations don’t mean that everyone with leukemia will soon be cured; rather, she says, “these are incremental advances that will allow us to improve individualized care.” For instance, while enasidenib can’t eradicate Hills’s disease, he says he’s thankful that the drug has extended his life and given hope to other patients like him. “I’m 74, but I recently celebrated my third birthday,” he says, reflecting on the additional time that the new treatment has given him. “That’s because three years ago, I started my life over.”