In An Era Where Misinformation is Rampant, More and More Scientists—at Weill Cornell Medicine and Nationwide—See an Urgent Need to Communicate Their Work to the Public 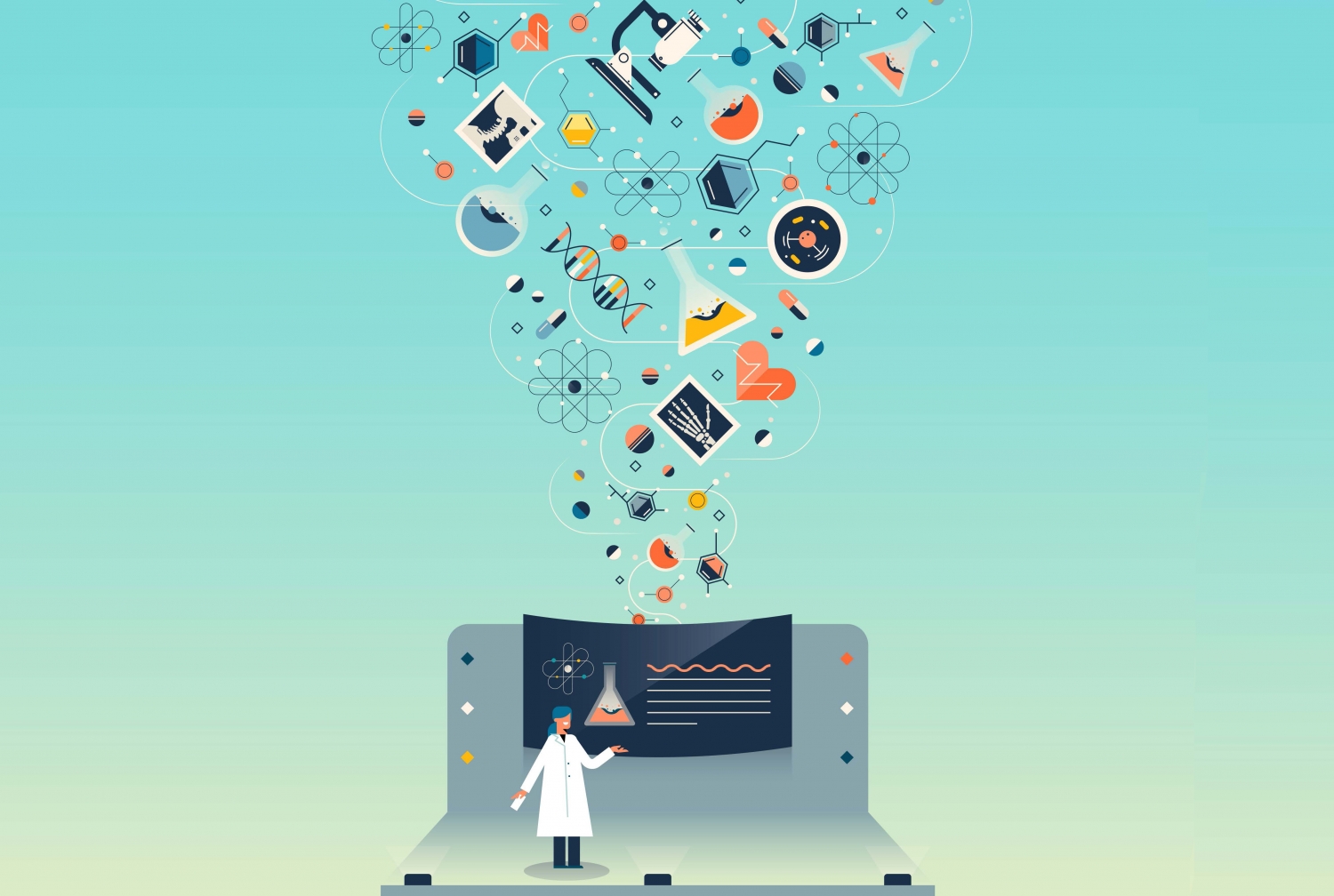 For many sports fans, reading recaps of the previous day’s games is a morning ritual; the box scores, play-by-plays and nicknames for star athletes bring the action to life. But the sports pages can feel a bit inaccessible to the casual observer—and they’re utterly baffling to someone who’s never spent an hour at the stadium. “How can you explain what happened at the game without using jargon, without being condescending and while trying to convey the stakes?” says Dr. J. David Warren, associate professor of research in biochemistry, who recently encountered that conundrum in the form of an exercise at a science communication workshop hosted by Dean Augustine M.K. Choi, and organized by Weill Cornell Medicine’s Office of External Affairs. “It’s much harder than it sounds.”

The analogy isn’t directly related to science, of course. But asking scientists to make the jargon-laden sports section meaningful to peers who never scan the box scores highlights a struggle that many researchers, steeped in the language of their own field, face when they try to explain their work to the public. And in recent years, Dr. Warren—like many of his colleagues at Weill Cornell Medicine and across the medical and scientific communities—has felt a new urgency to communicate about his research. Much of that is due to a rise in denial of science, coupled with a public distrust of experts that has contributed to such problems as parents refusing, against medical evidence, to vaccinate their children. Meanwhile, the advent of social media has opened new channels of communication that allow both scientists and charlatans to speak directly to the public. In an era of so many competing voices, it can be hard to get your message out, let alone make yourself understood. “I think scientists have gotten really good at communicating with themselves, but in speaking with the lay public, even the most seasoned scientists can struggle to get their point across,” Dr. Warren says. That idea was driven home by the sports exercise, which he admits was a tough assignment for the physicians and scientists sitting at his table. “It just shows,” he says, “how difficult it can be to explain something that you know very well.”

In 2015, the Pew Research Center surveyed more than 3,700 scientists connected with the American Association for the Advancement of Science (AAAS). Nearly 90 percent agreed with the statement, “Scientists should take an active role in public policy debates about issues related to science and technology.” Many were working to fulfill that obligation, including more than 50 percent who had talked to journalists about their work, and just under half who used social media to talk about science or learn about the latest developments.

Online, Twitter seems to be scientists’ preferred platform: in 2017, researchers at the Indiana University School of Informatics, Computing, and Engineering were able to identify more than 45,000 scientists tweeting across nearly every discipline. One is Weill Cornell Medicine’s Dr. Neera Gupta, associate professor of pediatrics and director of research at the Pediatric Inflammatory Bowel Disease Center, who joined Twitter in 2014, after friends and colleagues at national meetings mentioned they’d found it useful. She uses the microblogging platform to share research findings, raise awareness about inflammatory bowel disease and even recruit study participants. Her nearly 900 followers include national and international colleagues, journalists who cover medicine, and patients who live with the conditions she researches. “Twitter is a wonderful way to share scientific information,” says Dr. Gupta, who has since broadened her use of social media by participating in videos on NewYork-Presbyterian’s YouTube channel and in a Facebook Live video chat for the Crohn’s and Colitis Foundation. “I enjoy posting and I enjoy reading what everyone else posts. I think everyone benefits by participating in a thoughtful and constructive conversation, which may lead not only to all of us learning, but also to new ideas, collaborations and research, and ultimately to improved patient care.”

But while scientists are embracing new opportunities to communicate, many also worry that an expanding media landscape is helping to propagate disinformation. According to the Pew survey, nearly 80 percent of scientists were troubled by the way in which the media covers science, especially when “news reports don’t distinguish between well-founded and not well-founded scientific findings.” In part because of that concern, interest in improving communication skills has been on the rise among scientists nationwide. AAAS has seen increasing interest in its communication workshops for scientists and engineers; last year it offered 44 sessions, up from 26 in 2015. Attendees at the AAAS Annual Meeting, the world’s largest gathering of scientists, have increasingly requested communication-related training. In response, the organization provided three mini-workshops at the most recent event this past February, covering the fundamentals of science communication, social media and engaging policy-makers. Three hundred people attended.

Like Weill Cornell Medicine, other academic institutions are responding to the perceived need for better science communication. Last May, the University of California, San Diego, launched a research communications program funded by a two-year, $225,000 grant from the Gordon and Betty Moore Foundation, the family foundation established by the Intel cofounder and his wife. The new initiative will train UC San Diego faculty, post-docs and other researchers to better communicate with the public about their work. Meanwhile, the Alan Alda Center for Communicating Science at Stony Brook University—founded in 2009 and renamed for the actor and science advocate in 2013—organizes workshops around the country to help science graduate students and established researchers learn how to talk about their work. (It was the Alda Center that initially conceptualized the sports exercise.) Science journalist Christie Nicholson—who has trained more than 3,000 scientists as a lecturer with such institutions as the National Science Foundation and the New York Academies of Science, as well as the Alda Center—facilitated the February workshop at Weill Cornell Medicine. She has found that demand for services like hers is only increasing. “It could be because there’s more availability, or because there’s more need,” she says. “But the bigger thing is that, because science has become ever more abstract—and that’s not going to slow down—even those within the same discipline are having trouble speaking to each other.”

Many scientists are aware of the problem, Nicholson says, and she has been impressed by how much they want to be able to talk to others—including friends and family—about their work. But it can be hard to transcend the so-called “curse of knowledge,” wherein a person can’t remember what it was like not to have their current level of expertise. Another challenge is being able to rise above the day-to-day minutia of lab work to see things from a bird’s-eye view. “That’s necessary to engage almost any audience, even the audience down the hall from them,” says Nicholson, who works to help scientists imagine things from the listener’s perspective by practicing a technique called “empathy mapping.” “Your goal is to get your audience to feel or think or do something. The empathy map exercise gives you a sense of, ‘This is what they’re interested in, this is what they care about.’ That will help you with your messaging.”

It was in the interest of forging connections across disciplines that Dr. Carl Nathan, dean of the Weill Cornell Graduate School of Medical Sciences and the R.A. Rees Pritchett Professor and chairman of the Department of Microbiology and Immunology, established a new lecture series called “Science and Society” this past fall. The ongoing program brings in outside experts to help students understand subjects like medical journalism, medicine and social justice, and even theoretical physics. “I thought we could bring in scientists who talk about science that has nothing direct to do with what our graduate students study, and see how they communicate their science to us,” Dr. Nathan explains. “And then we can imagine communicating our science to an audience that doesn’t have the same technical background or frame of reference.”

While biomedical research funding has enjoyed strong bipartisan support in Congress in recent years, including recent increases in funding for the National Institutes of Health, scientists believe they must remain engaged. A “Science and Society” lecture scheduled for this fall will tackle advocating science to the government—an issue that has become more and more pressing, Dr. Nathan says, as anti-scientific ideas have become public policy under the current administration. While institutions like Weill Cornell Medicine remain nonpartisan, it has become clear to many faculty, including Dr. Nathan and Dean Choi that physicians and researchers must now work harder to make their case for government funding. In a letter to faculty in April 2017, just before more than 1 million people participated in a worldwide “March for Science,” Dr. Choi urged his colleagues to take every opportunity to engage with the public, writing, “By communicating more effectively about what we do and why it matters, we may acquire a broader base of support within our society.”

Part of that effort has included meeting with members of Congress directly—and Weill Cornell Medicine’s participation in a “Rally for Medical Research” last September was the best attended such event ever, with 14 faculty traveling to Washington, D.C., to meet with lawmakers. “The idea that climate science should play no role in government decisions that affect climate change, that the term ‘evidence-based’ must not appear in the budget of the CDC—these are disastrous points of view,” Dr. Nathan says. “So I think we have a civic obligation to be prepared to articulate what we do and why we do it, why it matters, and how it works, in all kinds of settings—with neighbors and family members, at school board meetings and town halls, and in writing letters to elected representatives. If we don’t speak up, we’re under attack.”