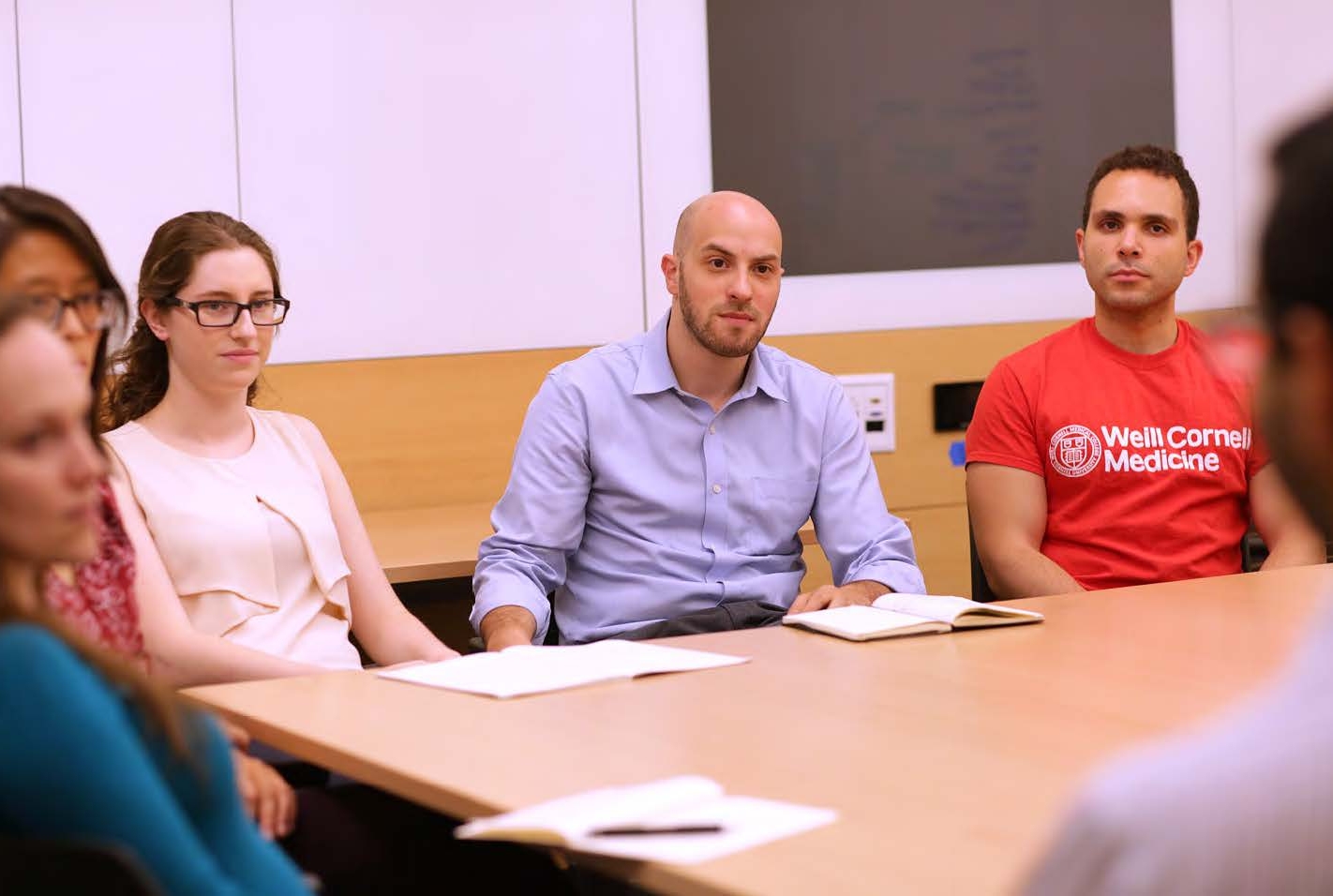 When Eric Kutscher ’18 was a sophomore in college, he went with some friends to give blood during a drive in the school gym. But he was turned away because of his sexual orientation—since at the time, federal guidelines barred donations by men who’d had sex with other men. It was the first interaction Kutscher had had with the health care system since coming out, and it stung. “Walking out of the event, with my peers’ eyes on me,” Kutscher says, “the stigma I felt was immense.”

The donation experience spurred Kutscher’s interest in LGBT health issues, helping put him on the path to medical school. And once he got to Weill Cornell Medicine, he realized that he had a broader desire: to understand how healthcare is affected by all types of stigma and discrimination. That inspired Kutscher to found Community Perspectives in Medicine (CPIM), a unique student-run elective that lets first-years hear directly from representatives of demographic groups that are often underserved, under-represented or misunderstood. “It’s very important that students understand that social determinants—like socioeconomic status, education level, employment status and societal attitudes such as discrimination and racism—play a major role in health outcomes,” says Kutscher, who continues to serve as course director. “You can have the perfect diagnosis and treatment plan, but if you don’t do a good job of communicating with your patient or tailoring treatment to their individual needs, they’re not going to get better.”

Each meeting of the seven-session course—which is held the second half of the fall semester so that students have had some patient experience through their weekly preceptorships—is devoted to a particular community. Topics include coping with chronic illness; LGBT health; people with physical disabilities; racial health disparities; how religion can affect medical care; and health of incarcerated individuals. “To be a good clinician, the more open you are to more patient populations, the better,” says Laura Deering ’20, who took the course last fall. “And the more you can educate yourself about the different needs among those populations, the better.”

The first half of each class features one or more speakers from a community-based organization in the city; the second half is devoted to a frank, students-only discussion of the issues raised. “That private, safe space—where the students can reflect on the different people in our society that they will be charged with caring for—is so valuable,” says elective’s faculty adviser, Dr. Linnie Golightly, (MD ’83), associate dean of diversity and associate professor of clinical medicine and of medicine in microbiology and immunology and an infectious disease specialist at NewYork-Presbyterian/Weill Cornell Medical Center. “They can discuss it with no recriminations. No one is going to judge them.” To nurture that sort of open atmosphere and conversational ease, ground rules of confidentiality and respect for each other’s opinions are set at the beginning and the course has been kept small, with a limit of 16 students who are admitted on a first-come, first-served basis. “The discussions were very earnest,” says Rachel Umans ’19, who took the elective as a first-year, helped facilitate the debriefing sessions her second year, and will take over leadership of the course after Kutscher graduates. “Students were deeply invested in the issues we were learning about. Everyone was thinking seriously about what it will be like when they’re physicians—what a massive responsibility they’ll have to their patients. It reassured me that I was surrounded by students who were equally concerned about the issues that underprivileged groups face in accessing medical care.”

For both Umans and Deering, one of the course’s most striking sessions covered the experiences of people with physical disabilities; the speaker, who uses a wheelchair, described clinical situations in which she has felt disrespected or dismissed. “She told us how providers often won’t ask patients with disabilities about their sex lives in the same way that we do other patients,” Deering says. “The talk really opened my eyes to the ways in which providers can, even unconsciously, treat the patients differently because of the assumptions we make about their lives.” Other speakers have included the medical director of an LGBT health center in Manhattan’s Chelsea neighborhood, who discussed topics ranging from the practicalities of gender pronouns to the importance of ensuring that clients feel comfortable discussing their sex lives; a foreign-born taxi driver who talked about how his status as an immigrant and non-native English speaker affects his access to healthcare; and a trio from three different religious traditions (a pastor, a rabbi and a Muslim doctor) who discussed how clinical practice may be guided by their faith, including the role of religious leaders in care and how houses of worship can serve as hubs for wellness efforts. Those and other sessions, Deering says, “brought up issues that I—being an able-bodied white woman whose gender identity matches the sex I was assigned at birth—have not had to think about before.”

As a student-run elective, CPIM isn’t graded; those who attend at least six of the seven sessions receive a certificate of completion and can add their course participation to their résumé. On a deeper level, though, Kutscher (who is leading a two-year study, with Dr. Golightly, of the course’s impact on student attitudes toward underserved populations) hopes that participants come away with what he terms “cultural humility”—an understanding that patients from varying backgrounds have different needs and sensitivities, and that it’s a physician’s duty to make them feel included and empowered in their care. For one of CPIM’s community speakers—Allie Cashel, who runs a small nonprofit devoted to raising awareness about living with chronic illness—it comes down to having practitioners empathize with the human being sitting across from them. “In patient-physician relationships, trust and open dialogue are so important,” she says. “All the students I’ve met with have been incredibly receptive. They’re eager to figure out how they can help and support their future patients—how they can really acknowledge the person on the other side of the room.”