As the Medical College Curriculum Evolves, Students are Embracing Innovative Ways In Which Technology Can Enrich Their Studies 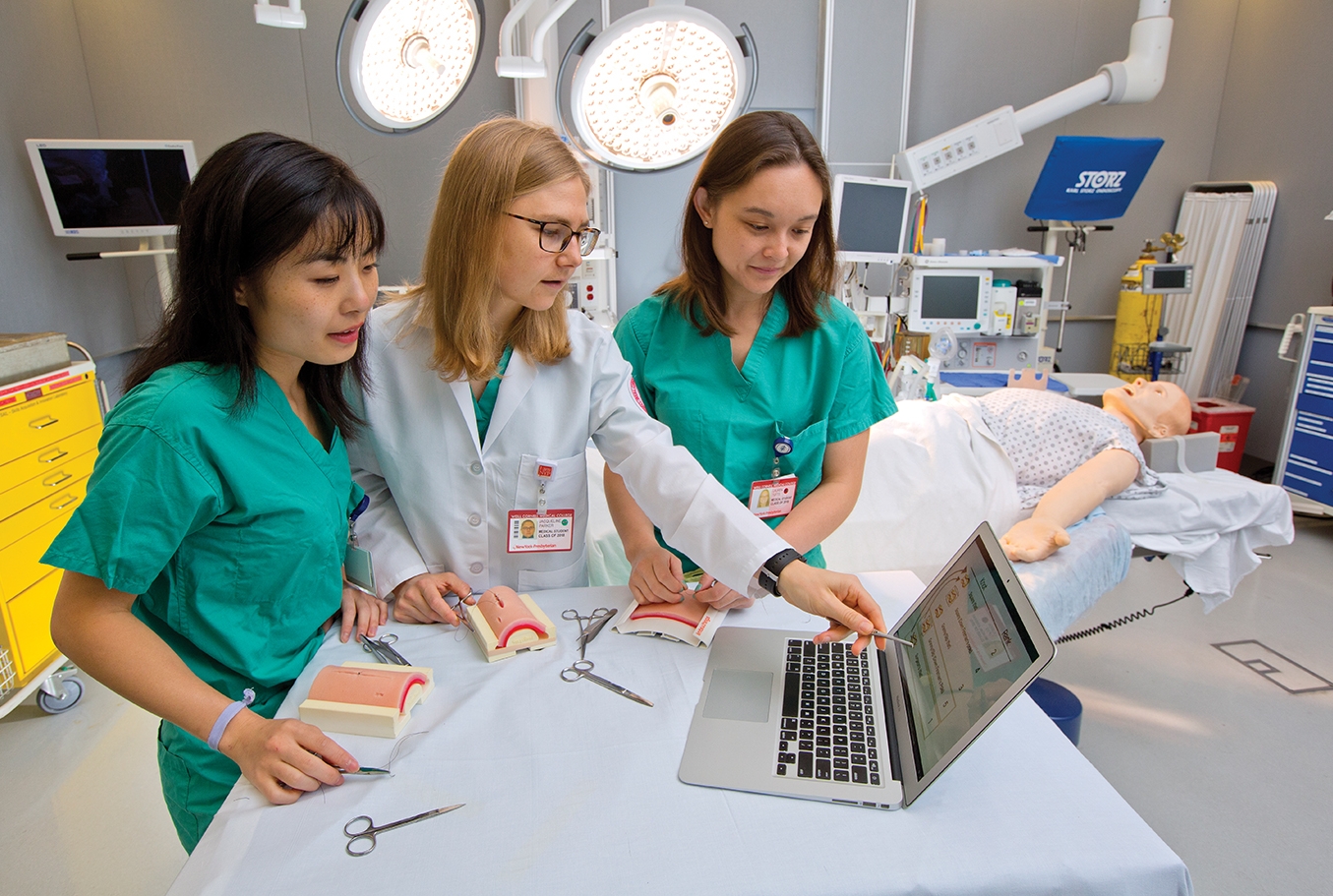 Medical students (from left) Yoshiko Toyoda ’19, Jacqueline Parker ’18 and Lauren Tufts ’19 in the SAIL lab. The three are collaborating on a new e-module for the surgical clerkship.

Brain and Behavior, a required course for students in the fall of their second year, covers a wide range of topics—from basic neuroscience to diseases of the central nervous system and the physiology of mental illness. As in any medical school course, it comprises a staggering amount of information, and absorbing it all can be a challenge. But Lee Gottesdiener ’19 says the details of one disease—multiple sclerosis (MS)—are cemented in his memory. That’s because the unit on it included a pilot “e-module,” a suite of videos and online activities that filled in for the traditional lecture. “It was definitely a memorable way to deliver the material,” Gottesdiener says. “The e-module was very interactive. You can re-watch the videos if you need to. It was nice to be able to go through the visuals at my own pace. I still remember more about MS—even though it was eight months ago—than about the other topics.” 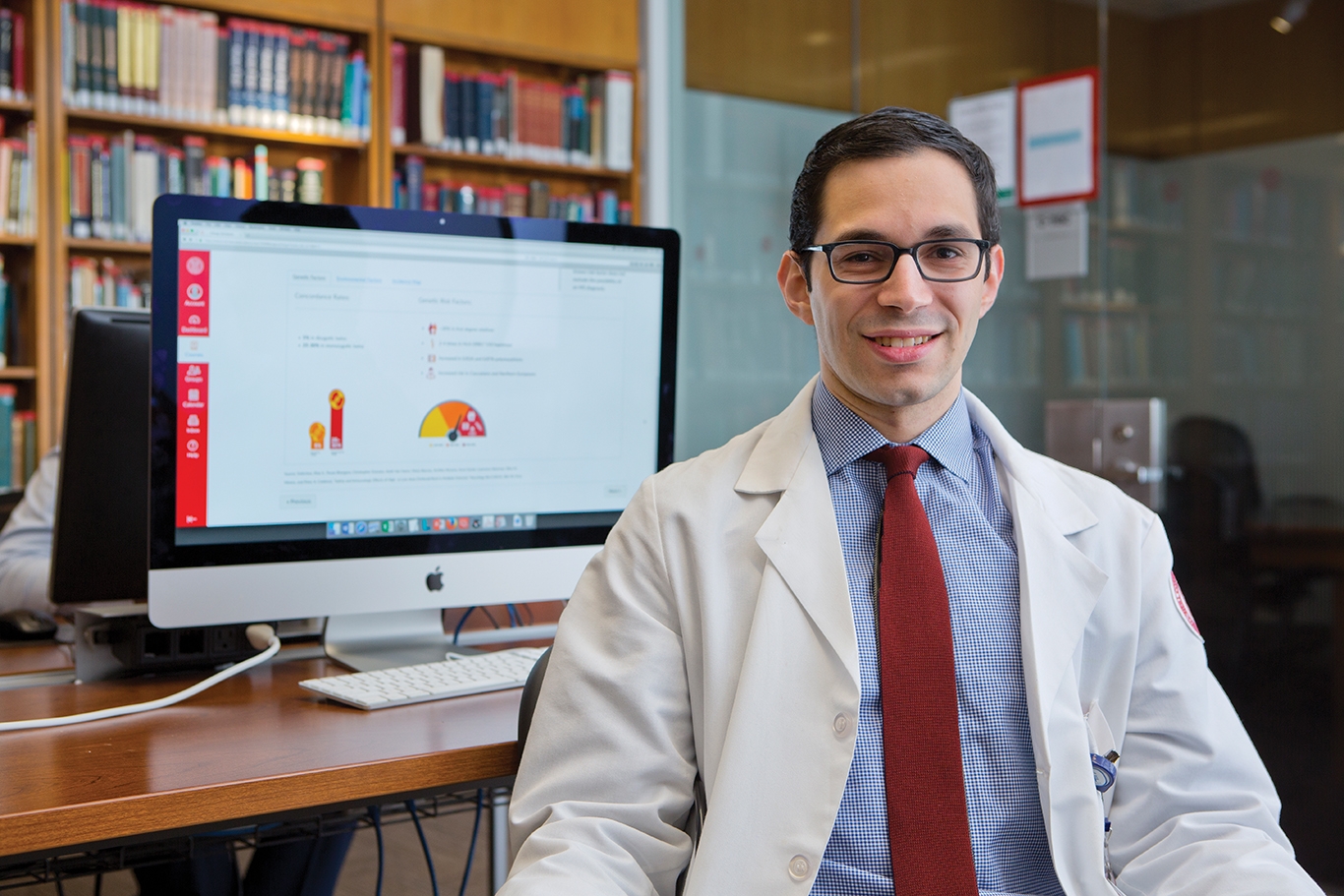 Lee Gottesdiener ’19 says that his understanding of multiple sclerosis was enhanced by the use of an e-module.

Gottesdiener’s rave review has been echoed by many of his classmates this past year. Three Weill Cornell Medical College courses now include “vodcasts,” or video podcasts, and e-modules—like the MS unit and a similar one about women’s heart health—created in partnership with developers at eCornell in Ithaca. More are coming, in a top-down initiative that is part of Weill Cornell Medicine’s broader move toward more educational technology, from the classroom to the clinic to the anatomy lab (where students now use iPads rather than textbooks to guide their dissections). Some of the tech is eye-popping: the Skills Acquisition & Innovation Laboratory (SAIL), for example, provides students with 24/7 access to simulated operating and procedure rooms complete with robotic patients. And at the Margaret and Ian Smith Clinical Skills Center, which offers a state-of-the-art patient simulator suite, students practice taking histories—with trained actors playing patients—while being digitally recorded for later review by them and their professors. Other technology is more basic but no less transformative, like a new course management system that allows faculty to upload materials for students to access on their own devices.

The new tech appeals to the millennial generation, those digital natives who always seem to have a smartphone in hand. “This new breed of students clearly expects things to be technology-based,” says Dr. Yoon Kang, the Richard P. Cohen, MD, Associate Professor of Medical Education, director of the Smith Clinical Skills Center, and associate dean for program development and operations of medical education, who is leading the effort. Still, she says, “it wasn’t just about indulging the students. Today there’s an increased need for lifelong learning, because of the pace at which information is changing, from clinical care protocols to basic science. So having information you can access on the hospital floor, or with a patient in front of you—that makes good sense.”

Across the country, medical education is in the midst of a sea change inspired by a major report on the state of American medical schools, published in 2010 by the Carnegie Foundation for the Advancement of Teaching. “The traditional curriculum—two years of foundational education followed by two years of clinical—hadn’t changed much for about a hundred years,” Dr. Kang explains. Among other things, their report called for more individually tailored programs, closer connections between the classroom and the clinic and the cultivation of self-directed learning skills and habits. That’s something electronic instructional materials can help facilitate—as medical schools from Johns Hopkins to Stanford have found when they incorporated more tech into their own curricula. 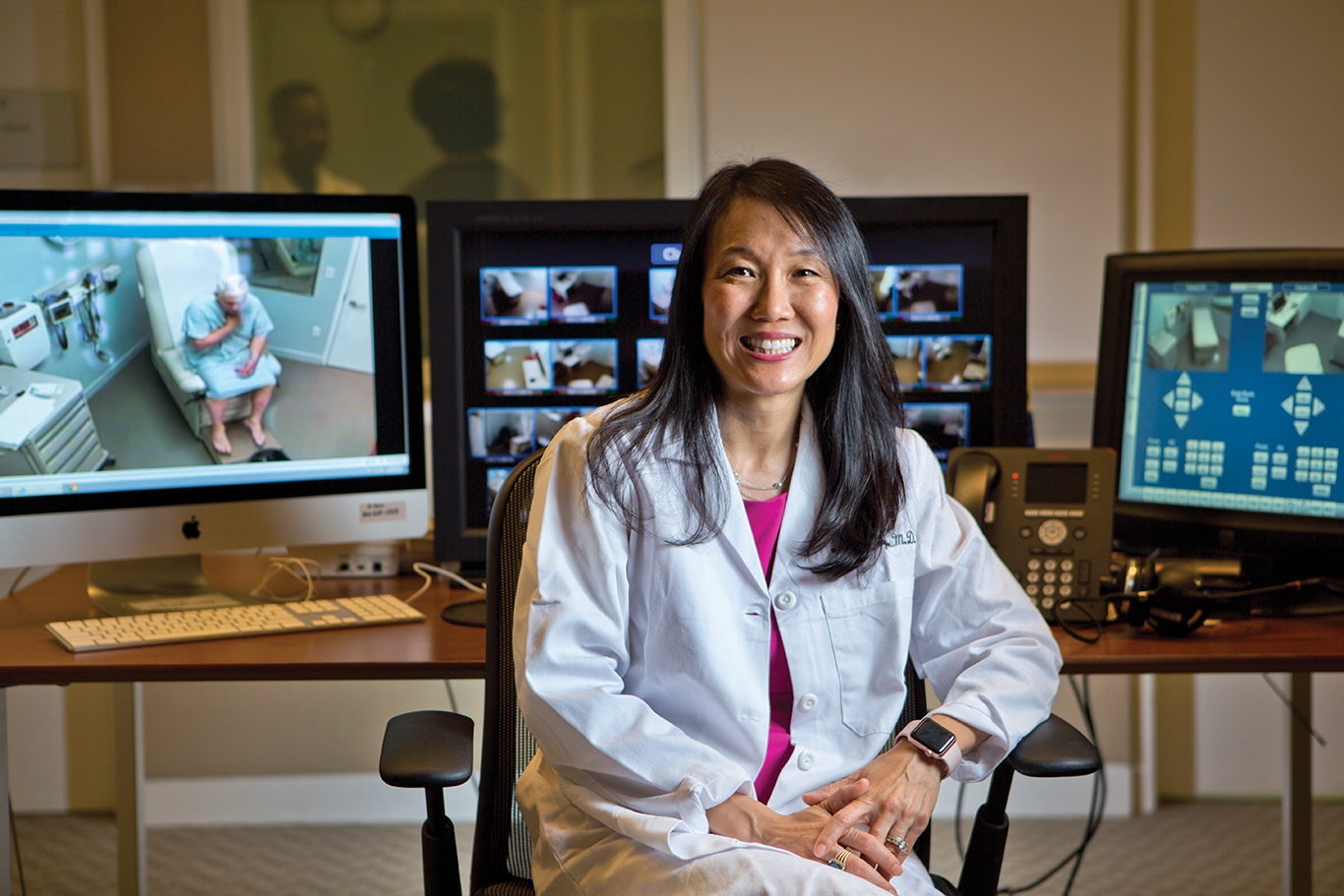 Adapting to new technology can be challenging for established instructors who are used to teaching in a certain way. Still, Dr. Henry Murray, the Arthur Ashe Professor of Medicine and a faculty member since 1979, agreed to take the plunge when he organized a new third-year course called Translational Science. “I’m an old dinosaur,” Dr. Murray, an infectious disease specialist at NewYork-Presbyterian/Weill Cornell Medical Center, admits with a laugh. “I’ve always favored the face-to-face type of class.” But he realized that since the new course would have its eight meetings spread over 16 weeks, technology might help “maximize the efficiency of each 90-minute session, so the students would be prepared to take full advantage of it.” Each of the eight units begins with assigned readings, a hypothetical case report and vodcasts that students watch on their own time. The vodcasts provide background information and an overview of that unit’s focus, whether it’s the role of the microbiome in disease or the genetic drivers of cancer and treatment resistance. A 90-minute live session follows, in which a translational scientist gives a brief lecture and, along with a clinician, leads a discussion with a patient whose condition illustrates the subject matter. “That allows the lecturer to focus on what they really thought was important,” Dr. Murray says. “They don’t have to try to encompass the entire topic in their one 40-minute talk in class.” 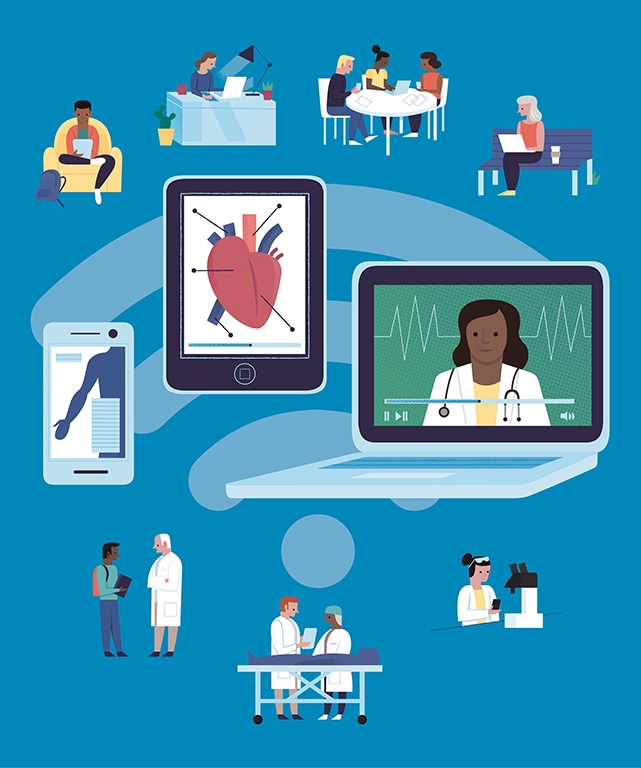 This approach is known by the buzzy term “flipping the classroom”: the foundational material that was once the subject of a lecture is now delivered beforehand, leaving more classroom time for deep dives and question-and-answer sessions. In recent years it has become popular, from high school on up; last year, the University of Vermont’s College of Medicine became the first member of the Association of American Medical Colleges to announce that it would flip all of its courses and eliminate the traditional lecture entirely. “You spend 15 or 20 minutes with the basics, and then you’re better prepared for a lecture,” says Lauren Tufts ’19, who took Translational Science last spring, watching the videos on her laptop at home in the evening. “I think it’s the future of medical education—and probably all education.”

Jacqueline Parker ’18, who started with the Class of 2015 before deciding to take a few years off, says students were turning to technology even before  Weill Cornell Medical College began incorporating it into the curriculum. Popular tools include the commercially available programs Sketchy Medical, Pathoma and Picmonic, which use animations and visual cues to help students learn material in microbiology, pharmacology and pathology. As students spend more time on the hospital floor and their schedules become less predictable, Parker notes that it’s much easier to whip out a smartphone than to haul around a stack of textbooks. “We’re in the hospital for eight or 10 hours—and in addition to patient care, we’re responsible for studying for our exams,” she says. “There are gaps of time in the day when it’s appropriate to study, and with electronic access to resources, it’s easier to make good use of the time.” 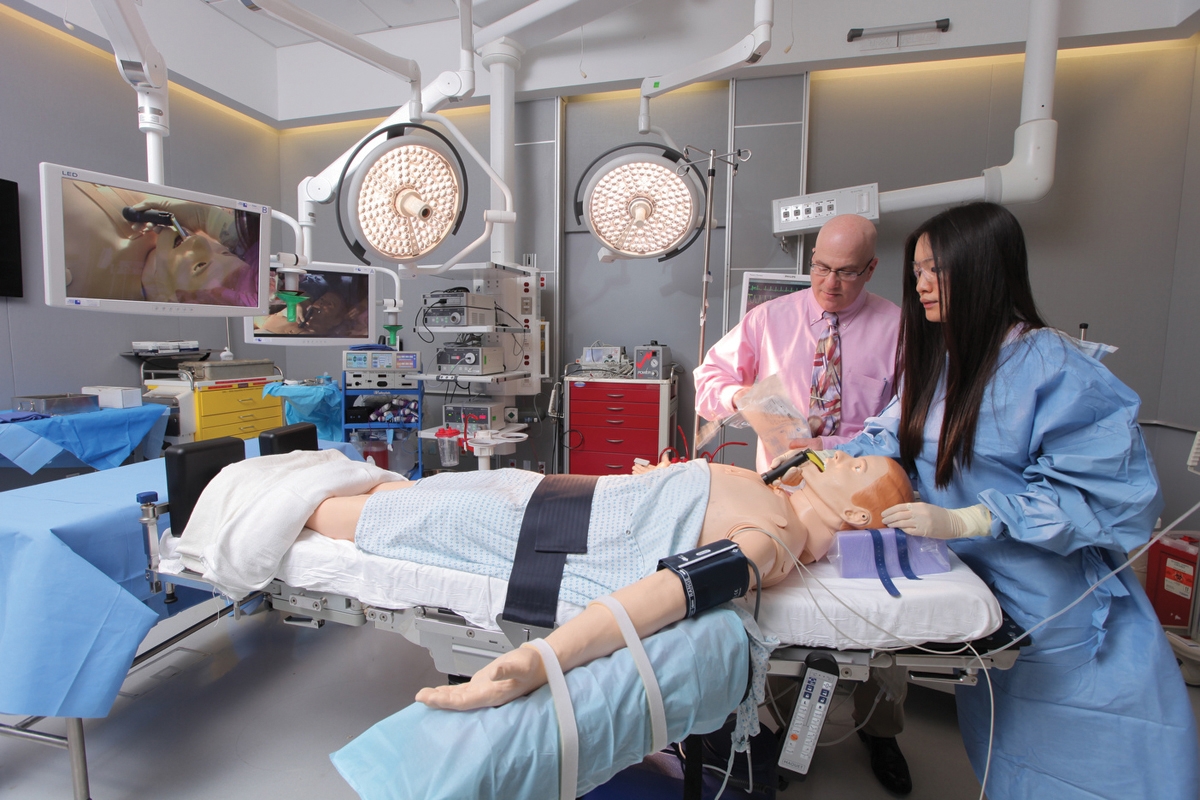 While feedback has been positive, Dr. Kang, an internist at NewYork-Presbyterian/ Weill Cornell Medical Center, says it’s too early to determine whether Weill Cornell Medical College students are actually learning more. But a number of studies and pilot projects around the country suggest that the flipped classroom approach—when done right—can improve grades and reduce course failure rates. One 2011 paper in Science showed that physics students in a flipped classroom scored 33 percentage points higher on an exam than a control group who attended traditional lectures; meanwhile, attendance rates rose by 20 percent.

At Weill Cornell Medicine, some students have become so enamored of educational technology that they have taken the unusual move of volunteering to create their own content. Under the guidance of Dr. Kang and the surgery curriculum team and in partnership with developers at eCornell, Tufts, Parker, and Yoshiko Toyoda ’19 are working on a new e-module for use during the surgical clerkship, which students take in the spring of their second year or the fall of their third. Focusing on hernia surgery, it will include a 3D anatomical diagram, a narrated slide presentation and videos of the various steps—from gowning and gloving to suturing the incision. “We want to cater to as many different kinds of learners as possible,” Tufts says. “For example, reading and writing aren’t my favorite ways to learn, but I love visual learning.”

Students in the Smith Clinical Skills Center, where future doctors are recorded on digital video while seeing “patients” portrayed by actors

Parker notes that if students have already familiarized themselves with a procedure on their own time, they’re better prepared to follow along when they observe it in real life—and are likely to ask more informed questions. “What technology can’t do is provide a personal connection and mentorship,” she says. “It’s important that we continue to grow mentorship opportunities, and that we find a way for technology to foster them.” Gottesdiener agrees that technology should serve as a complement, not a substitute, for traditional methods of teaching. But as Weill Cornell Medical College’s pedagogical approach continues to evolve, he is looking forward to more opportunities to learn through tech-driven methods. “It’s not going to replace everything,” he says. “But outside of school, we take in so much information through the computer—and this plugs into that.”