For Camila Villasante, science is a family affair.

As a child, Villasante listened intently to her mom, a microbiologist for the U.S. Navy, as she shared stories about her work investigating parasites and viruses that cause disease. Villasante was captivated. She wondered how tiny pathogens could have such a potent effect on humans many times their size. That inquisitiveness drove her to intern at an infectious disease lab in high school and attend undergrad at Johns Hopkins University to study biophysics. And now she’s taking her passion for science and medicine a step further as a first-year MD-PhD student at Weill Cornell Medical College.

On Aug. 15, Villasante joined 106 fellow classmates in Weill Cornell Medical College’s Class of 2021 as they received their short white coats during the institution’s annual White Coat Ceremony. In front of friends and family in Uris Auditorium, students joined Weill Cornell Medicine faculty members on stage, four at a time, to receive their new coats, officially marking the beginning of their medical education. 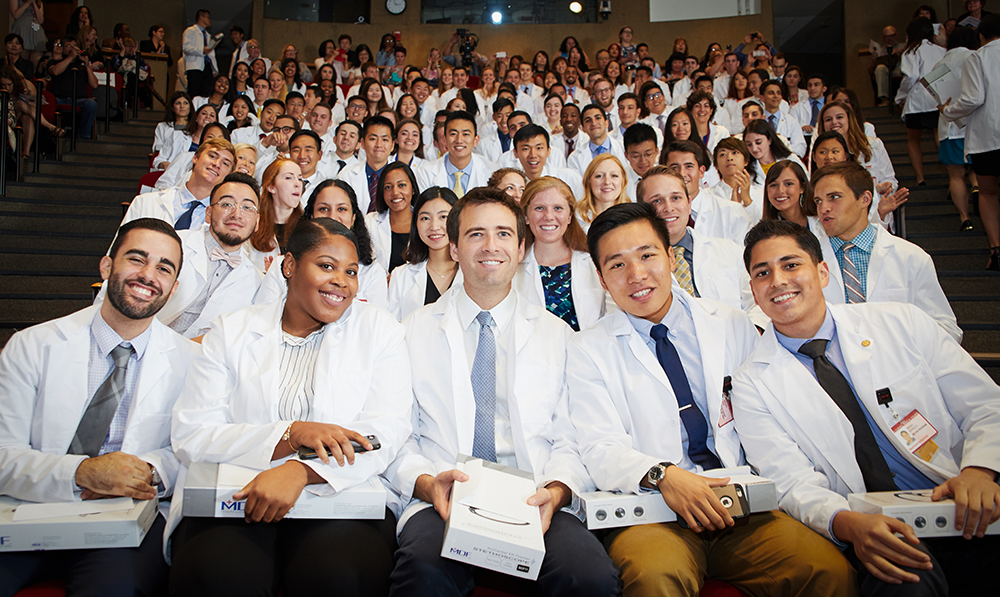 “It’s really an honor to be able to be in this position,” Villasante said. “I feel such humility and gratefulness. My white coat is also a reminder that I have a lot to learn. I need to concentrate. Medical school is not just about grades and test scores; it actually has extremely real, human importance. And that’s why I’m here. It’s not just to pass a test; it’s to be able to help people.”

“We’re here to recognize the significant achievement our students have made in getting to this important milestone and to mark the beginning of their journey in medicine,” said Dr. Augustine M.K. Choi, the Stephen and Suzanne Weiss Dean of Weill Cornell Medicine, who offered students words of encouragement. “As you prepare to take on the challenges of medical school, please remember that you will have the support and guidance of our faculty, who are eager to mentor you and see you succeed, and become the best doctors you can be.” 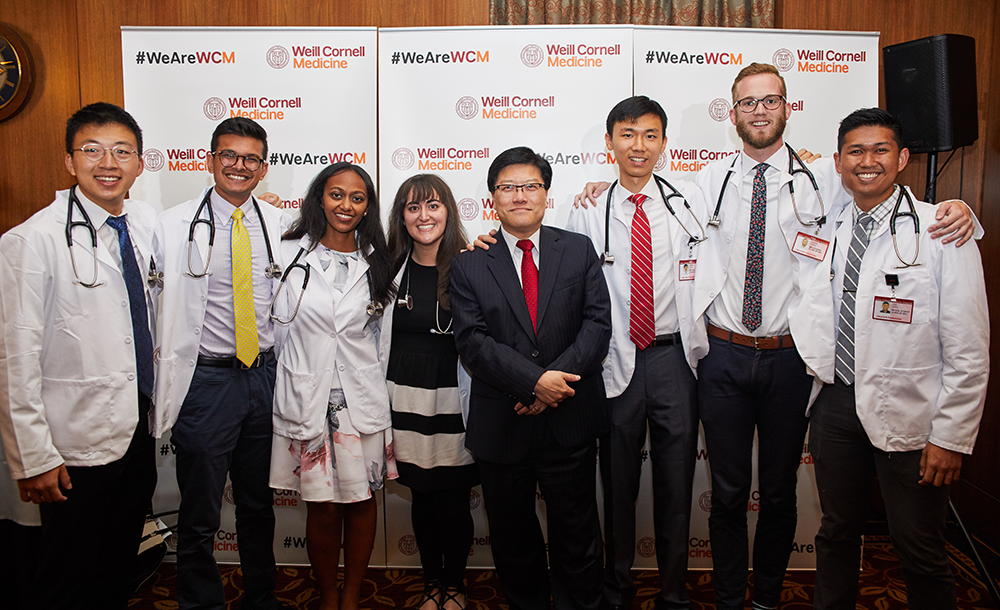 Bryan Aristega Almeida, a 2015 graduate of Cornell University, is excited to be Big Red again. Born in Ecuador and raised in the Sunnyside neighborhood of Queens, Aristega Almeida developed an interest in biomedical research as an undergraduate researcher in the Cornell laboratory of Dr. Brian Kirby, an associate professor of mechanical and aerospace engineering who is based in Ithaca but holds a joint appointment in Weill Cornell Medicine's Division of Hematology and Medical Oncology. After graduating, Aristega Almeida continued to sharpen his research skills as a research technician in Dr. David Scheinberg’s laboratory at Memorial Sloan Kettering Cancer Center. Attending Weill Cornell Medical College for medical school was a natural fit, he said, noting Weill Cornell Medicine’s longstanding collaborations with other distinguished institutions.

“The research opportunities that accompany Weill Cornell Medicine, particularly at Hospital for Special Surgery and Memorial Sloan Kettering, really drew me in,” he said.

The Class of 2021 is particularly diverse, with students hailing from 25 U.S. states and countries like Italy and Egypt. More than half are bilingual or multilingual, speaking a total of 22 languages. But what unites them all is a passion for medicine.

Being a doctor is the “best job in the world,” said Dr. Dana Zappetti, associate dean for student affairs and an assistant professor of medicine. “The white coat is a symbol of trust,” she said. “It symbolizes that we as doctors value science over ignorance, people over circumstances.”

Just as important, the white coat also embodies healing and wellness, caring and compassion. Those are the qualities that Dr. Carl Crawford, in his White Coat Address, appreciatively recalled about the medical students who cared for his dad, a police officer and professional light heavyweight boxer, when he was diagnosed with stage 4 colon cancer. Dr. Crawford was in medical school at the time and hadn’t yet started his clinical rotations. He felt powerless. 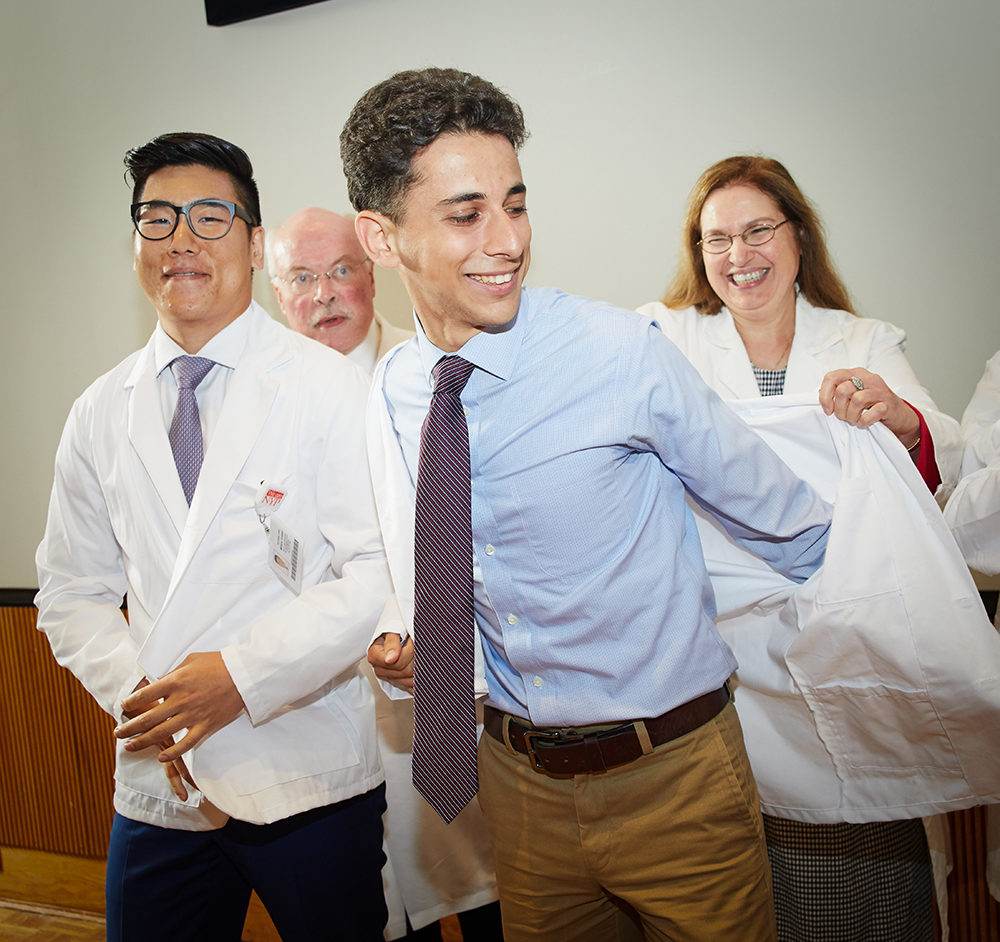 “But what was most refreshing were the medical students,” Dr. Crawford said, “asking their questions about his pain, his appetite, his symptoms, being extra careful with their examinations and their bedside manner. The time that the med students spent with my father was precious both to me and to him, and knowing my dad, he would have tipped them if he could. Med students had a great impact on us and inspired me to give my patients my everything, because it felt right.”

Dr. Crawford’s story hit close to home for student Abigail Shilvock. She thought of her own father, a firefighter who is battling oral cancer, and what inspired her to pursue medicine.

Shilvock fell in love with research while completing her undergraduate studies at Cornell, but it was her father’s experience as a patient that sparked a passion for medicine. Now, Shilvock, the first in her family to graduate college, is combining both interests as a student in the Tri-Institutional MD-PhD Program.

“Just seeing my dad’s doctors made me want to be like them,” she said.

Watch a video of the entire White Coat Ceremony or view photos from the event.