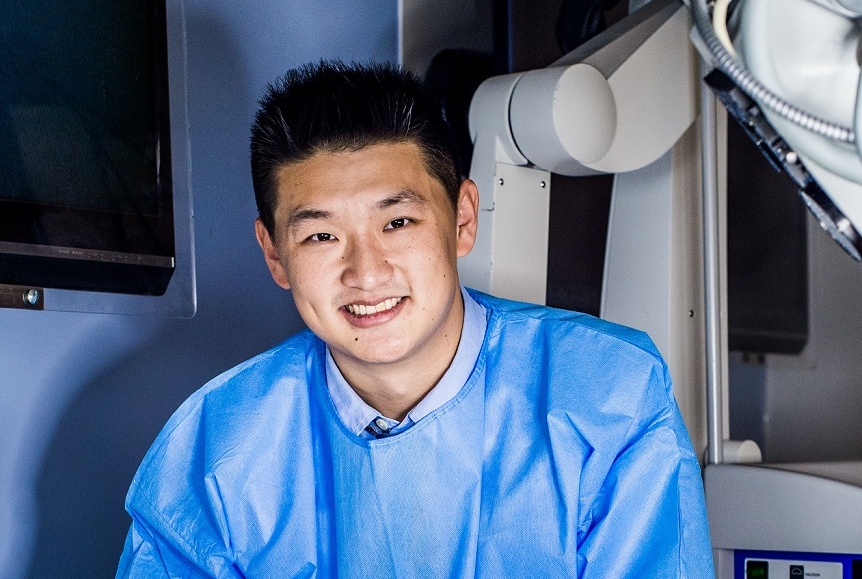 As an undergraduate student, Du Cheng invented a laboratory camera adapter that would allow scientists to capture images with an iPhone and then view them through a microscope. Although he figured out how to manufacture his technology, Cheng, currently a fourth-year MD-PhD student at Weill Cornell Medicine, needed help turning his product into a viable business.

Enter the Bench to Bedside Initiative (BBI), an innovative program that’s part of Weill Cornell Medicine’s Dean’s Entrepreneurship Lab (eLab) that is helping medical students, doctoral candidates, clinicians and researchers who are interested in business careers launch medical technologies into successful startups. Intrigued by the resources offered, Cheng enrolled in the BBI course last fall and on May 10 will compete in the inaugural eLab $50,000 Biomedical Business Plan Challenge alongside two other finalist teams. Cheng is focused on expanding his market offering to make it more attractive to investors.

“I had been developing my business organically, but it was a long and difficult process,” said Cheng, a 2016 Soros fellow whose company iDu Optics took first prize in December at the BBI’s annual “Pitch Day” competition. “The BBI was exactly what I needed to meet other scientists and investors, and formulate a business plan.”

The BBI course, which will be offered again next fall, also addresses the need to prepare participants who want to pursue opportunities in business, giving them tools to commercialize a technology and helping them establish industry relationships.

To prepare for the upcoming Business Plan Challenge, BBI teams have been working with mentors in fields including biotech, marketing, finance and intellectual property. In addition to $50,000 from Weill Cornell Medicine, $35,000 in legal services from Wilson Sonsini will be distributed among the winners as seed capital for their new companies.

“Through the BBI, participants go from having minimal knowledge of business to writing a pitch that is convincing to investors and then a more fully developed business plan,” said Dr. Sarah Kishinevsky, director of the Dean’s Entrepreneurship Lab at Weill Cornell Medicine and founder of the BBI.

Since the BBI course was first offered in 2014, four projects have been funded by investors. Meanwhile, the program has grown. While it attracted 20 attendees, on average, to lectures in its first year, 150 people joined recent sessions last fall. Classes are led by venture capitalists, lawyers, consultants, licensing experts and other industry leaders. Mentoring is an important component of the program.

The second-place winner from the fall BBI “Pitch Day,” Neel Madhukar, who presented a plan for an artificial intelligence program to accelerate drug development, is also set to participate in the “Business Plan Challenge.”

“Even if we don’t go into the startup world, communication is often overlooked in science,” said Madhukar, a fourth-year doctoral student in Dr. Olivier Elemento’s lab, who was named in 2016 to Forbes’ “30 Under 30” list of healthcare leaders. “The BBI has taught me to condense my points and get my message across as efficiently as possible.”

Alyssa Bagadion, a fourth-year doctoral student in the Biochemistry, Cell and Molecular Biology Program, has twice participated in the BBI program. Her team, named Sensogen, was the runner-up at “Pitch Day” in December.

Bagadion’s team wrote a practice business plan for a device that fits through laparoscopic ports and measures tissue oxygenation. Low oxygen levels in tissues can cause intestinal or bowel leaks, or other complications in gastrointestinal surgeries. The “intraoperative pulse oximeter” can help surgeons avoid those problems. The device was invented by Dr. Prasad Adusumilli, deputy chief of the thoracic service and laboratory head of Memorial Hospital Research Laboratories, and recently completed a clinical trial there with 114 patients.

"I decided to retake the class after my team won second place in the 2015 competition to gain additional experience with developing business plans for startups,” Bagadion said. “I eventually want to work for a biotechnology or pharma startup, and the BBI has been a valuable learning experience for me.”