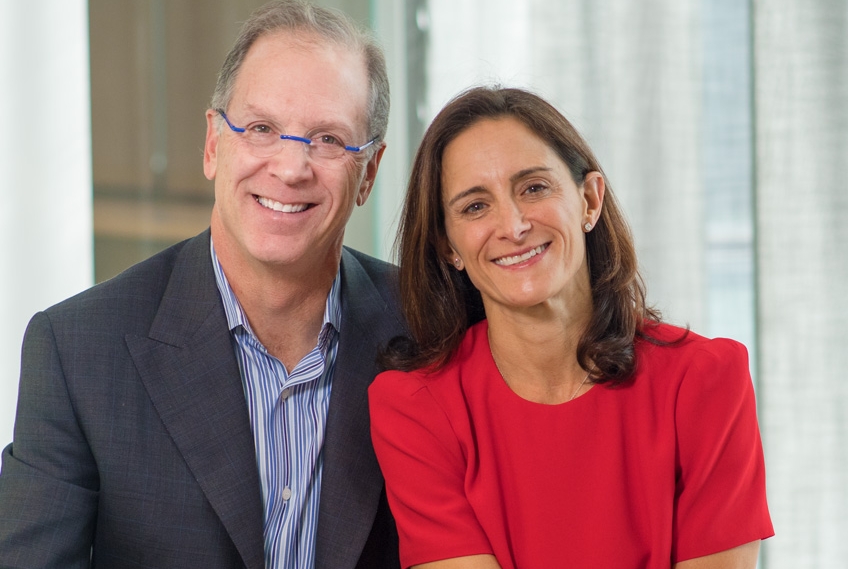 NEW YORK (October 25, 2016) –With the goal of advancing a powerful cancer treatment strategy that uses immune cells to fight the disease, benefactors Ellen and Gary Davis have generously made a $2 million gift to Weill Cornell Medicine to drive ongoing research in immunotherapy, the institution announced today.

This significant, foundational gift will launch the Ellen and Gary Davis Immune Monitoring Core, a critical research infrastructure that will serve as a repository for patient tumor samples, genomic sequencing and bioinformatics. The core will analyze and provide centralized, sensitive and quantitative patient data that investigators can use to advance their research into immunotherapy. The gift lays the cornerstone for further expansion in immunotherapy research and strengthens Weill Cornell Medicine's position as a leader in the development of powerful new weapons in the fight against cancer. A portion of the gift will fund research collaborations between investigators at Weill Cornell Medicine, Cornell University and Cornell Tech, strengthening the critical bridges between New York and Ithaca.

"We are extremely grateful to Ellen and Gary, whose strategic gift establishes an important foundation for immunotherapy research that is befitting of the treatment's promise," said Jessica M. Bibliowicz, chairman of the Weill Cornell Medicine Board of Overseers. "Ellen and Gary's generous support will augment our growing immunotherapy program, bolster our rich research communities at Weill Cornell Medicine and Cornell University, and bring us closer to eliminating cancer."

The Davises have a legacy of philanthropy at Cornell University, including generously endowing the Gary S. Davis Professorship of Government, the Gary and Ellen Davis Curator of Photography at the Herbert F. Johnson Museum of Art in Ithaca, and establishing a joint fellowship at the Meinig School of Biomedical Engineering and Weill Cornell Medicine to advance research into epilepsy.

"All of us at Cornell are profoundly grateful to the Davises for their immense generosity and vision, which will accelerate the pace of scientific discovery and ensure that more patients benefit from immunotherapy," said Hunter R. Rawlings III, interim president of Cornell University. "With this outstanding new gift, Ellen and Gary are strengthening the bonds between our faculty in Ithaca and New York City; their collaboration will inspire new investigative avenues that will truly make a difference."

"Immunotherapy represents one of the most exciting avenues of investigation for fighting cancer," said Weill Cornell Medicine overseer Ellen Davis and Cornell University trustee and alumnus Gary Davis. "We are proud to be able to make this important investment, empowering Weill Cornell Medicine and its unparalleled oncology program, led by Dr. Lewis Cantley, as well as the distinguished investigators at Cornell in Ithaca and engineers at Cornell Tech, to realize the promise of immunotherapy."

"Cancer is a devastating disease, and it is our responsibility to find new, more effective and more tolerable treatments that will allow patients to get back to their everyday lives," said Dr. Augustine MK Choi, interim dean of Weill Cornell Medicine and interim provost for medical affairs at Cornell University. "Ellen and Gary Davis' transformative gift helps us to do just that, providing valuable resources and fostering research collaborations so that we can perfect immunotherapy. We thank these champions of groundbreaking biomedical research for their incredible generosity."

Immunotherapy has become a promising new therapy for many types of cancers, hailed as the "fifth pillar" alongside surgery, radiation, chemotherapy and precision-targeted therapeutics. While the latter four attempt to remove or attack cancer cells directly, immunotherapy utilizes a patient's own immune system to strike the disease from within. Scientists have made important advances in this therapeutic area that have improved patients' lives and the outcomes of their diseases. However, most patients do not respond to immunotherapy alone, and it is not yet possible to predict who may need secondary, complementary treatments — or who may have developed treatment resistance. The Sandra and Edward Meyer Cancer Center at Weill Cornell Medicine is committed to overcoming those obstacles.

"Immunotherapy is an emerging frontier in medicine that, by leveraging patients' own immune systems to confront cancer, has the potential to profoundly change the way we treat the disease," said Dr. Cantley, director of the Sandra and Edward Meyer Cancer Center and a professor of cancer biology in medicine at Weill Cornell Medicine. "Thanks to the Davises' generosity and steadfast dedication to improving health, we will now be able to advance our understanding of this powerful therapeutic avenue, ensuring that more patients benefit from immunotherapy."

The Davises first met Dr. Cantley in connection with a three-year team science grant, which they underwrote for The Melanoma Research Alliance to support his cancer research.

The Ellen and Gary Davis Immune Monitoring Core will be a valuable, shared resource for Weill Cornell Medicine's Meyer Cancer Center and Caryl and Israel Englander Institute for Precision Medicine. In order to drive new scientific breakthroughs and innovations that may enhance the potential of immunotherapy, the core will offer a robust technological infrastructure that will allow investigators to analyze, sequence and archive tumor samples, explore the tumor microenvironment, and conduct expression studies. Bioinformatics technology will empower scientists to examine the array of data from those studies and translate their findings into assays that can be used to measure the efficacy of immunotherapy for each patient. Insights gleaned from those tests will be used to inform ongoing treatment decisions, determine effective adjunct therapies, and predict patient response and resistance to therapy.

Underscoring the special synergy between Cornell University, Weill Cornell Medicine and Cornell Tech, the Davises have dedicated $400,000 of their gift to fund research collaborations between investigators in New York and Ithaca. The research support, offered through competitive grants, will enable investigators to drive new innovations in immunotherapy that will benefit patients in New York and beyond.

About Ellen and Gary Davis

A graduate of the Wharton School of the University of Pennsylvania, Ellen Davis is currently an active principal, investor and advisor for early-stage businesses. She previously worked for Merrill Lynch in its High Yield Department and was an Associate in Corporate Finance at Drexel Burnham Lambert. Committed to advancing medical research, Ms. Davis joined the Weill Cornell Medicine Board of Overseers in 2015 and serves on its Special Committee on Research, as well as its Membership and Nominating Committee. She is also a member of the Board of Directors of the Melanoma Research Alliance, the largest private funder of melanoma research, and is on the Advisory Board of the Roy Vagelos Program in Life Sciences and Management at the University of Pennsylvania. A leader in other nonprofit endeavors, Ms. Davis developed and launched a virtual JCC platform for Greenwich, Conn. and currently serves as the chairman of the Board of JCC/UJA Greenwich. Ms. Davis is a member of the Trustees' Council of Penn Women and served as a member of the Horace Mann School Board of Trustees from 2009-2015.

Gary Davis received a bachelor's degree from Cornell University in 1976 and a Master in Business Administration and Juris Doctor degree from Columbia University in 1980. He is currently CEO of DKR Capital Partners, an investment advisory firm engaged primarily in the hedge fund and private equity markets. Mr. Davis began his career in 1980 in private law practice with the New York law firm Paul, Weiss, Rifkind, Wharton & Garrison. He joined Drexel Burnham Lambert two years later, where he served in various managerial positions and, ultimately, as its president until 1990. Mr. Davis went on to co-found and lead AIG Trading Group as its president and CEO.

A Cornell trustee since 2012, Mr. Davis is a member of the board's Executive Committee and co-chair of the Development Committee, as well as a vice chair of the Investment Committee and member of the Finance Committee. He was the Cornell Class of 1976 president from 2011-16 and chaired two of his class's most recent reunion committees. Mr. Davis also chairs the Herbert F. Johnson Museum of Art Advisory Council, and is a member emeritus of the College of Arts and Sciences Advisory Council. He serves as co-chair of the Columbia University Law School Dean's Council, and is a member of the Stratton Mountain School Board of Trustees and co-chair of its Finance Committee, as well as of the Metropolitan Museum of Art Photography Department Visiting Committee. Mr. Davis previously served as a member and development chair of the Solomon Schechter Day School Board of Trustees.