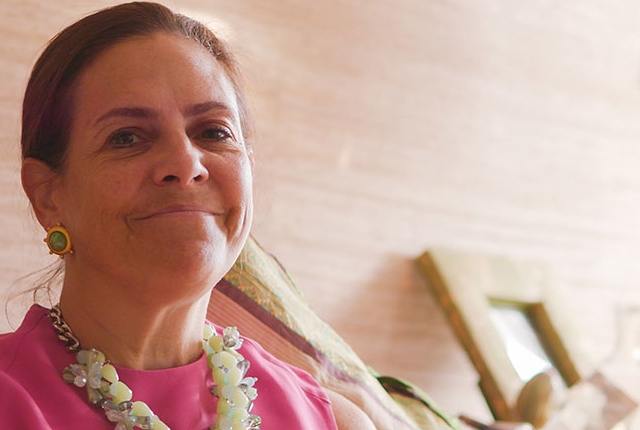 Alexandra Lebenthal has kept the condition that makes her hands uncontrollably shake a secret throughout her life. Living with essential tremor since she was 3, Lebenthal has struggled to pour drinks, eat food, shake hands, and swipe her subway MetroCard with ease. Despite her success as the president and CEO of a boutique investment bank, the tremors have made her feel self-conscious at the many professional and social events she attends.

Since undergoing MRI-guided ultrasound ablation, a new non-invasive treatment for tremors being offered at Weill Cornell Medicine, on Aug. 22, Lebenthal is enjoying new confidence in her dominant left hand. The technique relies on MRI technology to pinpoint the exact location in the brain where the tremors originate, then administers high-intensity focused ultrasound to destroy the problematic tissue. The U.S. Food and Drug Administration recently approved the procedure, also known by its acronym HIFU and which has been previously and successfully used to treat breast and prostate cancer, for use on essential tremors in the brain.

“I run my own company and have a very public life. If I’m giving a speech or attending a social event, the adrenaline makes it worse,” Lebenthal said. “At my company, we invest money for people, so if I am shaking, people may have the concern that I am not trustworthy or that I am nervous.”

But two days after the procedure, part of a clinical trial of the device, Lebenthal was holding her coffee mug and pouring beverages with one hand instead of two, and getting used to the sensation of holding a pen loosely, rather than tightly gripping it, while she signed her name. “It’s amazing because my hand has no tremor anymore,” said Lebenthal, 52, who is CEO of Lebenthal Holdings in New York. “I keep looking at it, like ‘oh my God, is it going to come back?’”

Essential tremor is the most common of all movement disorders. Unlike Parkinson’s disease, it does not have any other accompanying symptoms and is not life threatening. “In the scheme of horrible things you can have, it’s not horrible, but it is something that affects my daily life and I am conscious of it on a daily basis,” Lebenthal said.

Her tremors, which have mostly existed in her hands, have worsened as she’s aged. Because such tremors are often treated with medication that does not target the tremors directly, their effects on patients’ shaking can be limited. Lebenthal has tried various medications to treat her tremors, but none of them have worked long-term.

During her HIFU treatment, Lebenthal wore a fitted helmet that holds 1,000 transducers, or beams of ultrasound waves. While individually the waves don’t have enough energy to damage brain tissue, when they are combined together and directed at the same target from different directions, they “create a high amount of energy that can destroy a small area of the brain,” said Dr. Michael Kaplitt, vice-chairman for research in the Department of Neurological Surgery at Weill Cornell Medicine, who performed Lebenthal’s procedure. She remained awake throughout the procedure.

Dr. Kaplitt became the first physician in New York to use HIFU treatment in the brain as part of the clinical trial in July. During that procedure, he watched as another trial participant’s tremors disappeared in a matter of minutes. “This new technology provides a 21st century solution to a problem that’s been around for a long time and continues the trend in neurosurgery toward offering less invasive therapies for a variety of brain disorders,” said Dr. Kaplitt, who is also an associate professor of neuroscience and neurological surgery in neurology and otolaryngology at Weill Cornell Medicine and a neurosurgeon at NewYork-Presbyterian/Weill Cornell Medical Center. Currently, the main option for essential tremor patients who do not respond well to medical therapy is deep brain stimulation (DBS), which involves placement of an electrode into the same area of the brain targeted by HIFU and implantation of a battery under the skin in the chest to power the therapeutic electrical impulses. DBS, which has been offered by Dr. Kaplitt and his team at Weill Cornell Medicine for movement disorders for over 15 years, remains a viable option for patients who may not be candidates for HIFU therapy.

Trial participants who have undergone the HIFU treatment in other parts of the country have seen significant improvements in tremor, with some having return of function to normal, according to the FDA and a study published Aug. 25 in the New England Journal of Medicine. In that study, about a third of subjects experienced a loss of control of body movements following the procedure (ataxia) as well as numbness — adverse events that persisted at 12 months for 9 percent and 14 percent of patients, respectively. Weakness occurred in a small percentage of subjects, persisting rarely. One subject had persistent finger pain a year after the procedure.

Lebenthal found out about HIFU after stumbling upon a video about it on Facebook. “When I saw the video, I thought, ‘This is amazing!’” Lebenthal said, adding that she reached out to Dr. Frank Petito, the Finbar and Marianne Kenny Professor of Neurology and a professor of clinical neurology at Weill Cornell Medicine, and a neurologist at NewYork-Presbyterian/Weill Cornell, who informed her that the institution was installing the device used to perform the procedure. It turned out that Dr. Philip Stieg, chairman of the Department of Neurological Surgery at Weill Cornell Medicine and neurosurgeon-in-chief at NewYork-Presbyterian/Weill Cornell, had a longstanding interest in HIFU technology and was spearheading the acquisition of the device in collaboration with Dr. Robert Min, chairman of the Department of Radiology and radiologist-in-chief at NewYork-Presbyterian/Weill Cornell. Lebenthal jumped at the opportunity to enroll in the Weill Cornell Medicine clinical trial.

“I have been so overwhelmed by how excited people involved at Weill Cornell Medicine and NewYork-Presbyterian seem to be,” Lebenthal said. “There’s this whole supportive group here … I really felt I was part of something special.”

The procedure took three hours to complete. Periodically, physicians would ask her to draw a straight line or a spiral to gauge how well the therapy was working; ultimately, her tremors receded by 100 percent, Dr. Kaplitt said.

Eventually, he said, scientists could study the technique’s application to a variety of neurological disorders ranging from Alzheimer’s disease to addiction. His laboratory has also been investigating ways to use HIFU to non-invasively deliver gene therapies to specific brain regions. Dr. Kaplitt has previously researched delivery of the same gene therapies in human patients with invasive injections.

“We now have this opportunity to provide safe, non-invasive therapy to try and treat those types of diseases. This represents not only a new opportunity for essential tremor patients but also provides a platform of development for even more cutting-edge non-invasive technology,” Dr. Kaplitt said.

While Lebenthal is marveling over the sophistication of the technique, she is also delighting in the simple things she is suddenly able to do.

“I’ve had to grip a pen so tightly to write without shaking and it’s been something that actually hurt,” she said. “When I had to sign a document before leaving the hospital, it was the strangest feeling, like holding a feather. I’m looking forward to do that more.”