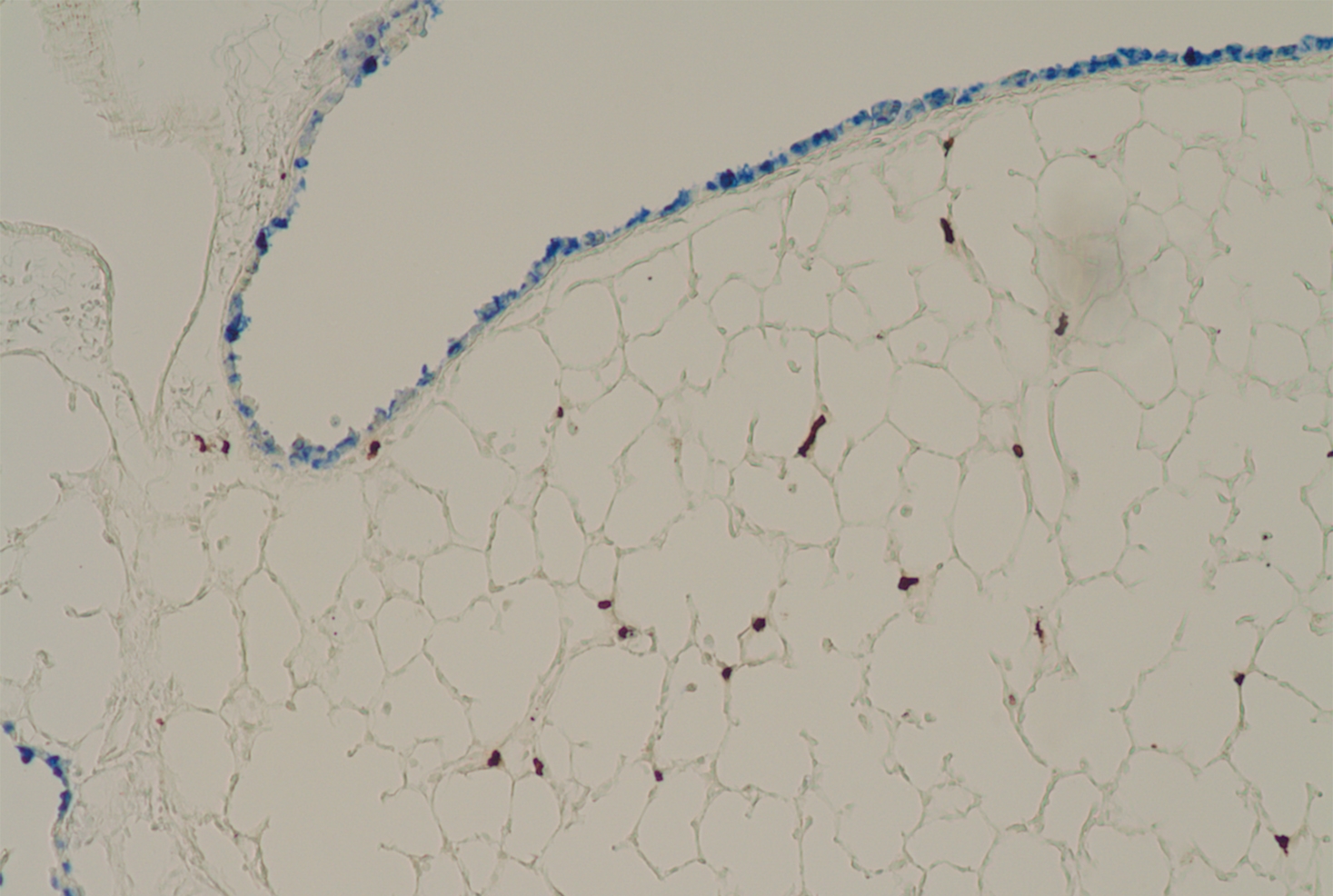 Representative photomicrograph of lung from a 5-week old mouse exposed to high oxygen the first 2 weeks of life followed by 3 weeks in room air. With exposure to high oxygen at birth mast cells (stained brown) are found within the walls of the alveoli which is not observed under normal conditions. Airway club cells are stained blue.
Image credit: Silver Laboratory.

Severely premature infants, born at less than 29 weeks and weighing less than 2.2 pounds, can have many health problems. Their underdeveloped lungs put them at risk for developing bronchopulmonary dysplasia (BPD), a chronic condition characterized by scarring, inflammation and impaired lung development. An inflammatory response is thought to cause the lung injury, and paradoxically, life-saving oxygen therapy contributes to the problem.

"Once these structural changes in the lung are made early on, they don't reverse," said senior author Dr. Randi Silver, associate dean of the Weill Cornell Graduate School of Medical Sciences and a professor of physiology and biophysics at Weill Cornell Medicine. "So understanding what is causing the damage is very important."

Researchers at Weill Cornell Medicine and Icahn School of Medicine at Mount Sinai investigated a potential culprit — an inflammatory cell type called a mast cell that has been associated with BPD but never shown to be causative. In a translational study, they showed that mast cells cause lung damage in newborn mice exposed to high oxygen levels and that premature infants receiving oxygen have high levels of potentially damaging mast cell products in their lungs as well. The group published their results online on April 29 in the American Journal of Physiology-Lung Cellular and Molecular Physiology and their paper was also recognized by the American Physiological Society as an outstanding study.

While BPD is a complex condition, the investigators were able to model it in mice by exposing newborn rodents to high oxygen levels for two weeks. Following the exposure, they found an increased number of mast cells in the mice's lungs that persisted after they were returned to a room-air environment.

The group then found evidence that mast cells are responsible for malformation of developing alveoli, the tiny air sacs in the lung where oxygen and carbon dioxide are exchanged. "If you look at the lungs of these high oxygen-exposed newborn mice, they resemble those of someone with emphysema," said Dr. Silver, whose laboratory has studied mast cells for more than a decade. Yet mice deficient in mast cells don't develop this defect under the same conditions.

In an important translational step, the group was able to analyze airway fluid taken from the ventilator tubes of a small number of preterm infants receiving oxygen in the neonatal intensive care unit. "We found exactly the same mast cell markers in this fluid that we found in the mice," Dr. Worgall said. The airway fluid also contained mast cell-derived particles called exosomes bearing destructive proteins, reinforcing the importance of these cells in lung injury.

A mast cell product found in lung fluid, beta-hexosaminidase, was found to be a good candidate as a biomarker for the evolving disease, which is currently unpredictable and is diagnosed too late for a preventive treatment to work if it were available.

"BPD is one of the most common severe complications for premature babies," Dr. Worgall said. "When these infants grow up, some of them get asthma, and they are at higher risk for chronic obstructive lung disease as an adult. By understanding the mechanisms by which the premature lung is damaged, we can develop therapeutics for the condition to either slow it down or prevent it."