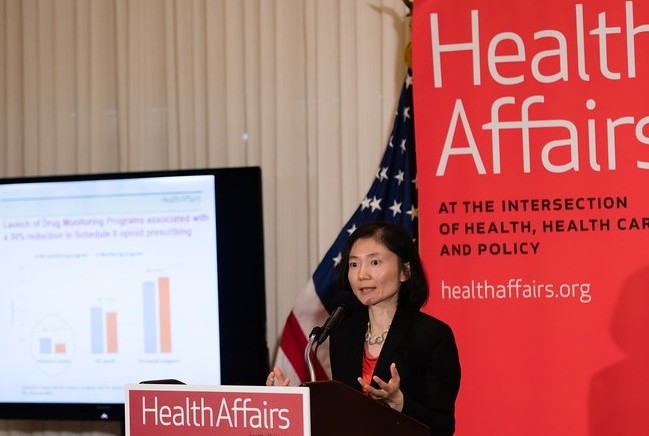 For the study, published in the June 6 issue of Health Affairs, investigators analyzed 10 years of data from the National Ambulatory Medical Care Survey, which collects information on patients, office visits and clinicians, such as reasons for particular visits and related diagnoses. Their analysis revealed a more than 30 percent drop in the rate of prescribing Schedule II opioids (such as Oxycontin® and Percocet®) — the most addictive class of painkillers — in two-dozen states with such monitoring programs.

"We could be the first to provide strong and rigorous evidence of a positive effect of state prescription drug monitoring programs," said lead author Dr. Yuhua Bao, an associate professor of healthcare policy and research at Weill Cornell Medicine. "The reduction is encouraging because it reflects providers’ growing awareness of opioid misuse and abuse, and also suggests that they are moving away from prescribing drugs that have the highest risks of abuse and dependency."

Prescription drug-monitoring programs are state databases that gather information from pharmacies on dispensed controlled substance prescriptions. All states except Missouri have implemented such programs within the past 20 years, allowing registered users — typically physicians and dentists, as well as pharmacists, law enforcement agencies and medical licensure boards — to identify patients at high risk for obtaining multiple prescriptions from multiple sources. They also spot providers who may be engaged in aberrant prescribing.

To determine the effectiveness of these programs, Dr. Bao and colleagues analyzed 26,275 ambulatory care office visits for pain that occurred in 24 states that had upgraded or implemented drug-monitoring programs during the 2001-2010 study period. They examined prescribing rates for various opioid and non-opioid pain medications, but found a significant decline — from 5.5 percent to 3.7 percent of all pain-related visits — in the prescribing of Schedule II opioids only.

The decline was especially notable because prescribers were not using the programs to their fullest during the study period, Dr. Bao pointed out. "Even when use was low there was an effective reduction in the prescribing of opioid analgesics that have the highest risks of abuse and dependency," she said. She noted that previous studies had produced mixed findings.

Attention to opioid misuse and addiction is increasing, especially following recent high-profile overdose deaths like that of the singer Prince. In 2014, prescription opioid overdoses killed nearly 19,000 people in the United States, while more than 10 million Americans were reportedly using opioids for nonmedical reasons. "Given how fragmented the healthcare system is, a lot of times providers don’t have a complete picture of what their patients are taking," Dr. Bao said.

She said that ideally, drug-monitoring programs will continue evolving and strengthening states’ drug-control efforts. "States play a leading role in drug-control policies and these programs are prominent in their policy toolkits," she said. "The idea is to empower and inform doctors at the point of care so they can practice safer and more appropriate prescribing of these medications."