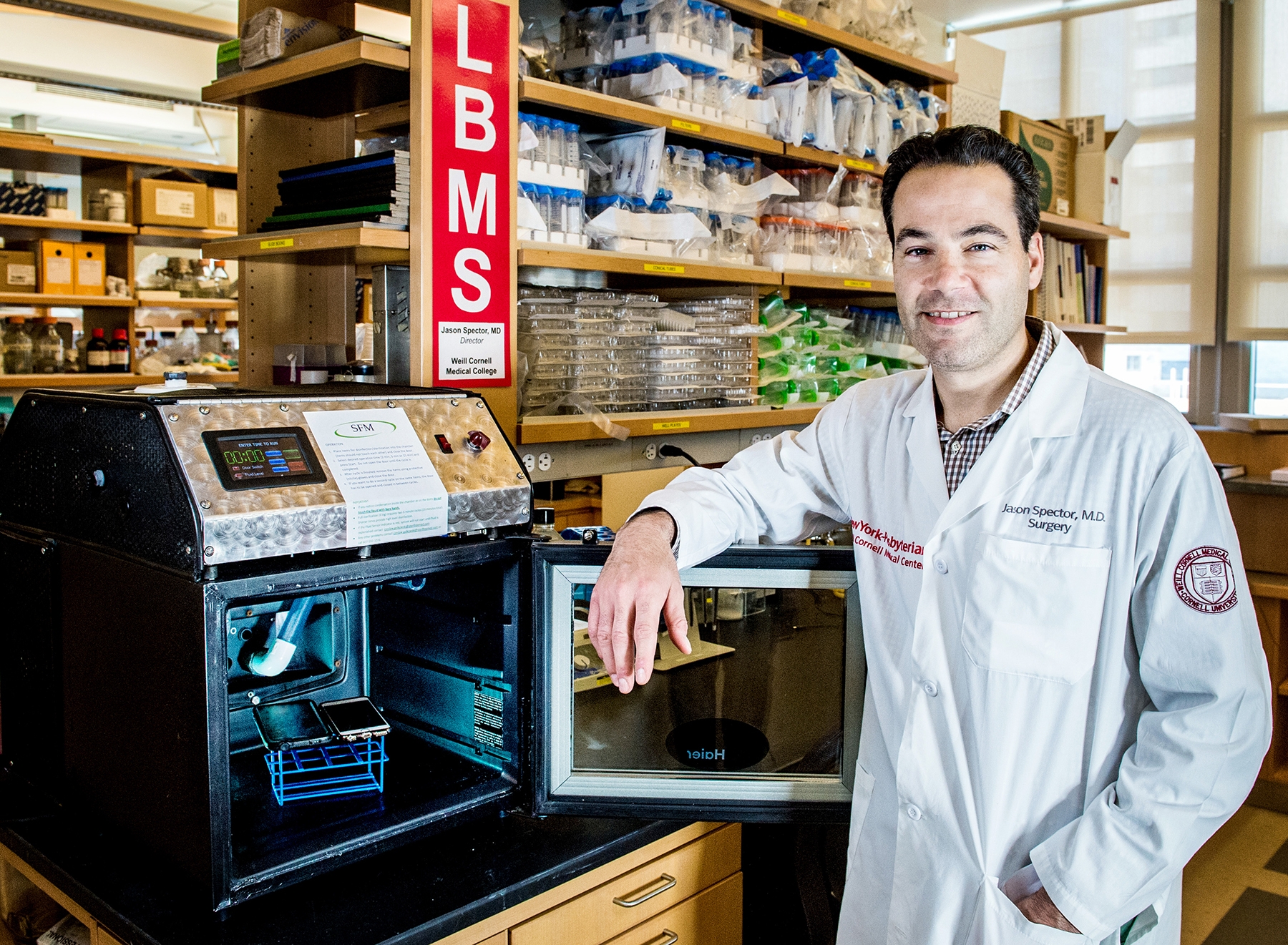 Cell phones treated for just 10 minutes in a new desktop-sterilization device were fully rid of germs, including those that may be responsible for common skin infections, Weill Cornell Medicine researchers found in a new study. The findings, published Feb. 11 in the journal Plasma Medicine, suggest a quicker, easier, cheaper and more thorough way to clean common electronic devices, and may offer a new strategy to disinfect biomedical equipment and other objects used in healthcare settings.

"The reality is, stuff is growing on cell phones all the time. Now we have a device that uses this cool plasma technology to get rid of it with speed and ease," said principal investigator Dr. Jason A. Spector, a professor of surgery and of plastic surgery in otolaryngology at Weill Cornell Medicine and a plastic surgeon at NewYork-Presbyterian/Weill Cornell Medical Center. "This is something that's innately relevant to all of our lives. I could imagine having one of these sterilization devices throughout every hospital or any patient care facility for that matter for treating electronic devices and biomedical equipment at the end of every day."

Medical equipment is typically sterilized by either using toxic gas on delicate items or high-pressured steam on metal equipment. Because both of these methods would harm electronic devices typically used in the hospital setting, there's no quick and thorough way to rid them of bacteria. This new portable device, developed by the company Sterifre, Inc., uses a "cold" plasma system (actually room temperature) that doesn't harm electronics and only requires air, industrial-grade hydrogen peroxide, and a power source to run.

Invented by Dr. Czeslaw Golkowski, a Cornell University alum and a former research associate there, the device, called the Sterifre Countertop Sterlizer, came to Ithaca as part of the Kevin M. McGovern Family Center for Venture Development in the Life Sciences, which was established to assist high-potential, early-stage life science spin-off companies at the university.

"This research is an excellent example of inter-campus collaboration," said Dr. Spector, who is also an adjunct professor in the Nancy E. and Peter C. Meinig School of Biomedical Engineering at Cornell University and director of the Laboratory of Bioregenerative Medicine and Surgery at Weill Cornell Medicine. "Here at Weill Cornell Medicine, we're able to take cutting edge technologies developed by our engineering colleagues and help come up with real-life applications."

To demonstrate, Dr. Spector and investigators on his team used the sterilizer on 51 cell phones — including Apple iPhones, Blackberry devices and the Samsung Galaxy S4 — from lab staff and other volunteers. The investigators swabbed the phones for bacteria that accumulated after every day, normal use, then placed them in the device. They treated half of the phones for five minutes and the other half for 10. The investigators then swabbed the phones again after cold plasma treatment and cultured all swabs for 24 hours.

The phones treated for five minutes had a 93 percent reduction in bacteria, but for every device in the 10-minute group nothing grew — demonstrating that they were completely disinfected and bacteria free. All of the cell phones emerged working normally with no damage or change in appearance. Although the investigators only looked at the efficacy of killing bacteria in this study, the technology used in this device should be equally effective in killing fungi, spores and viruses, Dr. Spector said.

Because many of the delicate components in cell phones are also found in other electronics, including tablets, laptops and medical monitors, investigators believe that the sterilizer will work on them, too. They are in the planning stages to test that hypothesis.

The technology's usefulness may extend beyond cleaning medical equipment. Dr. Spector is also testing how well it disinfects wounds in animal models. Early data is promising, he said, as it appears to both non-invasively sterilize wounds and help in wound healing. "There's the potential for this device to have a huge impact in the biomedical field at large."

The device is already commercially available on a limited basis, and efforts are underway to get it approved by the U.S. Food and Drug Association.

"I can imagine these things populating hospitals, clinics, schools. You could even have one at home if you wanted to disinfect your baby's bottle," said Dr. Spector, who also tested the device on less delicate equipment, including his 10-year-old son's fragrant sneakers, which came out smelling fresh again. "That's the beauty of this device — you can put anything that you can think of in there."