In an Era When HIV is Largely a Manageable Infection, Dr. Susan Ball Looks Back at the Dark Days of the AIDS Crisis 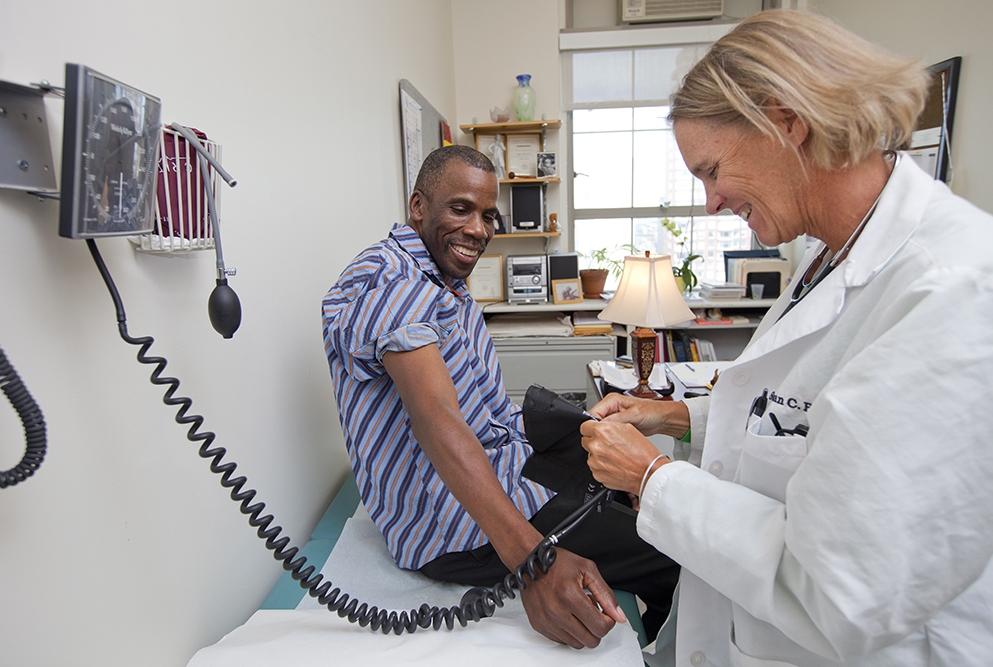 A brigher future: Dr. Susan Ball with patient Lyndell Johnson. In her time working with the disease, prognoses for patients with HIV have gone from "nearly hopeless" to "very hopeful."
Photo credit: John Abbott

In the first line of her medical memoir, Dr. Susan Ball gets straight to the point: "I am an AIDS doctor." Voices in the Band chronicles Dr. Ball's experiences on the front lines of the HIV epidemic, recalling a time three decades ago when she and her colleagues struggled to help their desperately ill, often socially marginalized patients — people whose disease not only had no effective treatment, but sparked fear and rejection from the world around them. For the reviewer who lauded the book in the New York Times, herself a physician, Dr. Ball's memoir "brought the bad old days back to me in Technicolor: the waiting rooms full of walking skeletons, splotched and coughing, vanishing forever at regular intervals. Those were the days when you returned to work after a week's vacation and asked, 'Who died?'"

Published last spring by Cornell University Press, Dr. Ball's book is subtitled A Doctor, Her Patients, and How the Outlook on AIDS Care Changed from Doomed to Hopeful. In it, she describes life at the Center for Special Studies (CSS), the HIV/AIDS clinic at NewYork-Presbyterian/Weill Cornell Medical Center — a still-thriving practice that, at its founding, opted for a generic-sounding name to spare patients the stigma associated with the disease. "So many people were dying; it was such an intense experience that we all shared, and that sharing helped us get through it," says Dr. Ball, an associate professor of clinical medicine. Sitting in her CSS office on the hospital's 24th floor, she recalls how the grim prognoses of the '80s gave way to life-saving therapies in the mid-'90s. "It was such an important time in the HIV epidemic, but also in medicine. Going from having no medications to having good, effective treatment — it was a transformative period."

Unlike many medical memoirs, Dr. Ball's book contemplates the patient's perspective as much as that of the staff. She introduces the reader to such people as Bella, a former heroin user with advanced AIDS. Bella's still-addicted husband was also infected, as was one of their two sons — though the couple couldn't bear to tell their children the truth, even making excuses for why one son took so many pills. And Etta, a troubled woman who "persistently treated her HIV as an annoyance more than a concern"; unwilling or unable to comply with her drug regimen, she was in and out of the hospital, her condition growing increasingly grave. And Stewart, who not only coped with real complications like blood clots and pneumocystis pneumonia but became obsessed with minor symptoms and had an "almost hysterical fear" of potential drug side effects. While CSS's current patients have much brighter medical prognoses, Dr. Ball notes, they often still cope with challenges of poverty, addiction and family dysfunction. "Many of our patients come from disadvantaged parts of society, and it can be hard to reach them or make a significant impact in their lives, because HIV is just one little factor in a life that's got so many other issues," she says. "But sometimes if we can get them to give up their drug use or take their medicine so their HIV is under better control, or even just help them with their childcare needs, having that little impact can make a big difference. That intimate environment with patients is something that I really wanted to get across in the book."

Dr. Ball's memoir is a work of narrative nonfiction, with the names and identifying details of patients and colleagues changed to protect confidentiality. Some of the anecdotes were drawn from her personal journal, and she honed her writing skills with a master's program in narrative medicine at Columbia. "I hope that readers will take away an appreciation for what medicine can do — how a good, well-run, cohesive interdisciplinary team can support patients in a way that is so strong and effective," Dr. Ball says. "Even in the bad old days when we couldn't treat the HIV — when we couldn't make patients better, per se — we could still support them and care for them."

'Those Kinds of People'
An excerpt from Voices in the Band 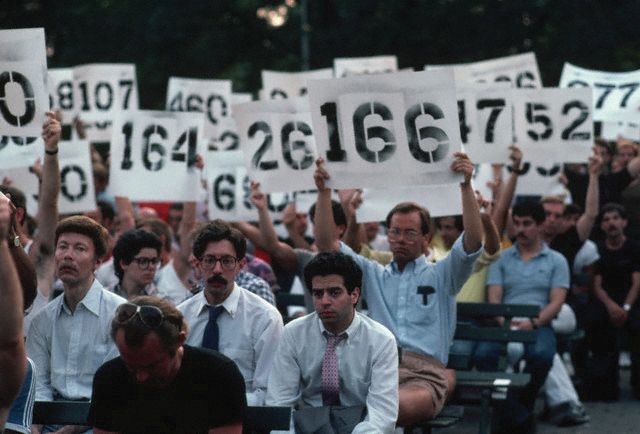 The stigma that surrounded AIDS patients from the very beginning of the epidemic in the early '80s continued to be harsh and isolating: mention AIDS and people imagined promiscuous homosexuals and heroin addicts, all of them skinny and covered with purple spots. They remembered those early photos of diaper-clad, emaciated men with scraggly beards looking fearfully into the face of the priest or nun leaning over their hospital bed. People looked askance at me: What was it like to work in that kind of environment with those kinds of people?

My patients are "those kinds of people." They are an array and a combination of brave, depraved, strong, entitled, admirable, self-centered, amazing, strange, funny, daring, gifted, exasperating, wonderful and sad. And more. At my clinic most of the patients are indigent and few have had an education beyond high school, if that. Many are gay men and many of the patients use or have used drugs. They all have HIV, and in the early days far too many of them died. Every day they brought us the stories of their lives. We listened to them and we took care of them as best we could. My patients have the kinds of voices that are rarely heard, coming as they do from a hip-wiggling drag queen or a drug-using Hispanic man who lives in a shelter, or from a welfare-dependent single mother of four who lives in her subsidized two-bedroom sixth-floor walk-up out in a remote part of the city that I will likely never see. My colleagues and I heard the stories; and in caring for our patients we created more stories, with all the small victories, the horrible deaths, the humor, and the sadness. We worked hard to be good doctors and our patients helped us become better ones as we took our tumultuous journey together.

I wanted to write a book about my patients and my colleagues and how we made it through the roller-coaster last decade of the twentieth century, how we moved from helplessly watching our patients die to being able to offer them a treatment course and a fairly normal life expectancy. In that time we saw some patients literally return from death's door. This kind of dramatic success has not been seen in any other field of medicine, except perhaps following the introduction of penicillin many years ago. I wanted to try to answer the question, "What was it like?" What was it like to care for patients with AIDS, a disease that didn't even exist when I was in college? How did we deal with dying patients for whom we had a diagnosis but no treatment? How did we care for patients that many in society rejected, patients that many even within the field of medicine rejected? What happened in those years, when the prognosis for a patient with HIV went from nearly hopeless to very hopeful?

From VOICES IN THE BAND, published by Cornell University Press.
Copyright © 2015 by Susan Ball. Reprinted by permission.