For anesthesiology residents, the Cornell University vet school offers a new (and furrier) perspective on their field

"She's like a typical pediatric patient," says Dr. Dorian Batt. "She's small, and it's difficult to get IV access." 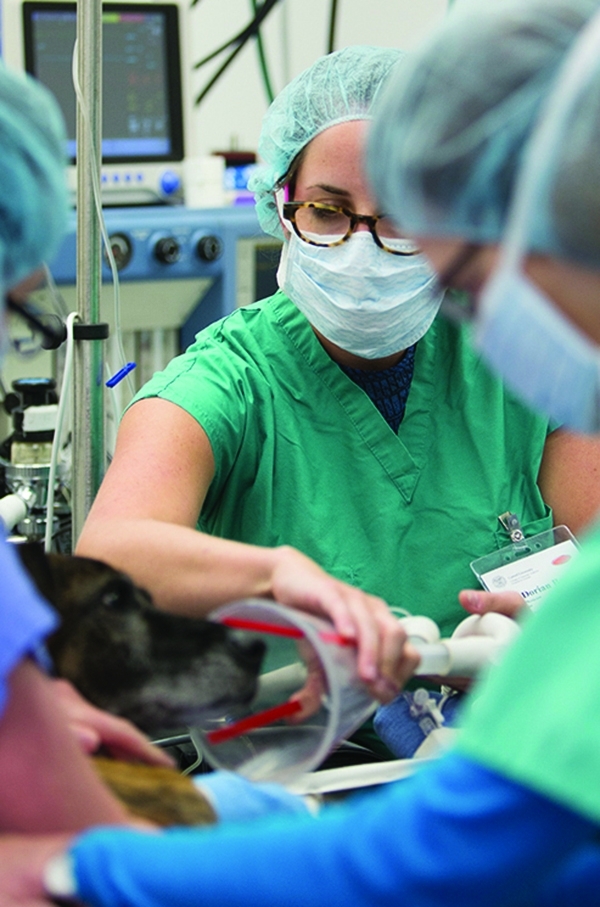 Dogged effort: Anesthesiologist Dr. Dorian Batt, with colleagues and a canine patient in the OR at the Cornell University Hospital for Animals. Photo credit: Robert Barker/UP

It's a normal day at the Cornell University Hospital for Animals — but an extraordinary one for Dr. Batt. A fourth-year anesthesiology resident at NewYork-Presbyterian/Weill Cornell Medical Center, Dr. Batt is doing a weeklong elective in the College of Veterinary Medicine, learning how the specialty is practiced on four-footed creatures. "One of the best parts is the afternoon rounds where they come up with anesthetic plans for the next day," says Dr. Batt. "They go through every decision about the drugs they're going to use, and I get to chime in and ask why they're doing certain things and tell them why we'd do something different in a human. It's kind of an intellectual high." Dr. Batt visited the Ithaca campus — her undergrad alma mater — in late summer, observing anesthesia being administered to cats, dogs, pigs, sheep and other animals. The trip's many highlights included watching a rabbit being intubated — no easy feat, since their jaws open only 30 degrees — and viewing an emergency surgery on a horse with colic.The patient in question is lying on an exam table, swathed in a towel. To sedate her for surgery, her doctors try to insert an intravenous line in one tiny leg; when that fails, they try another leg. Finally, they succeed — with the third leg. The locus of concern for the half-dozen, highly trained medical professionals gathered around the table? A pet bunny, scheduled to be spayed.

At the vet school, there's a cheeky T-shirt declaring that "real doctors treat more than one species." And indeed, the chance to see how anesthesia is administered to creatures great and small is a major draw for Dr. Batt and her colleagues. "Our residents go there and engage with the same things they've been doing on humans for four years — putting somebody to sleep, maintaining their blood pressure, replacing blood volume," says residency director Dr. Eric Brumberger, assistant professor of anesthesiology and an undergraduate alumnus of the Ithaca campus. "But when they need to think about it for 10 or 20 different species, they have to go back to the basic principles, to really understand how the drugs work in a way that, I hope, elevates their overall understanding of anesthesia as a field."

For Dr. Batt, one major takeaway from her week in Ithaca was how adaptable and flexible veterinarians are, not only at treating multiple species but in using equipment that is often repurposed from human medicine. Having such a comprehensive command of the specialty that you can cope with challenging situations that arise even in seemingly routine cases is vital in treating two-legged patients as well, Dr. Brumberger says. "I don't want anyone to think that what we do as anesthesiologists could be described as rote or mundane; each patient brings to the table certain anatomic, age-related or physiologic factors that could make an anesthetic or a surgery go a million different ways," he says. "But after a while, things can become a little routine. When you're at the end of your training — when you feel like you're at the top of your game and you've mastered your craft — it's challenging to be thrown into an environment where all of a sudden instead of the heart having four chambers it has two; instead of a normal adult heartbeat of 60 to 100 per minute, it's 20. That kind of out-of-the-box thinking on your feet is essential to any anesthesiologist."

Launched last spring, the elective complements a long-standing program in which the vet school sends its anesthesiology residents to NewYork-Presbyterian/Weill Cornell for a weeklong stay, enriching their understanding of their specialty and its underlying science by seeing how it's practiced in humans. They send one resident a year, while the New York program will be sending four — underscoring the fact that vet anesthesiology is a much smaller field. As Dr. Brumberger notes, NewYork-Presbyterian/Weill Cornell's department alone has 78 residents. By comparison, only between five and 12 residency slots in veterinary anesthesiology come open nationwide in any given year, says his counterpart at the vet school, Dr. Manuel Martin-Flores, an assistant professor of anesthesiology and residency program director, who coordinates the school's elective with Dr. Luis Campoy, a clinical associate professor of anesthesiology and analgesia. "As competitive as human anesthesiology is," Dr. Brumberger says, "to be a vet is even more insanely competitive."

Dr. Brumberger and colleague Dr. Kane Pryor, an associate professor of clinical anesthesiology and the department's director of education, conceived the program after noting that whenever a visiting veterinary anesthesiology resident gave a talk at NewYork-Presbyterian/Weill Cornell, it would draw standing-room crowds — and would routinely be rated among the year's finest lectures. "We saw how skilled and passionate they are about what they do," Dr. Pryor recalls, "and we said, ‘We have to send our residents up there.'" Now, there are many more hopeful fourth-years than available slots, so they have to apply with a personal statement. "Anesthesiology for most people, even other physicians, is a bit of a black box," Dr. Brumberger says. "We love what we do — we think it's really cool, exciting, important and interesting — but not many other people in the world can understand it. So when you find somebody else who can relate to it, but has this unique bent, it's a match made in heaven."