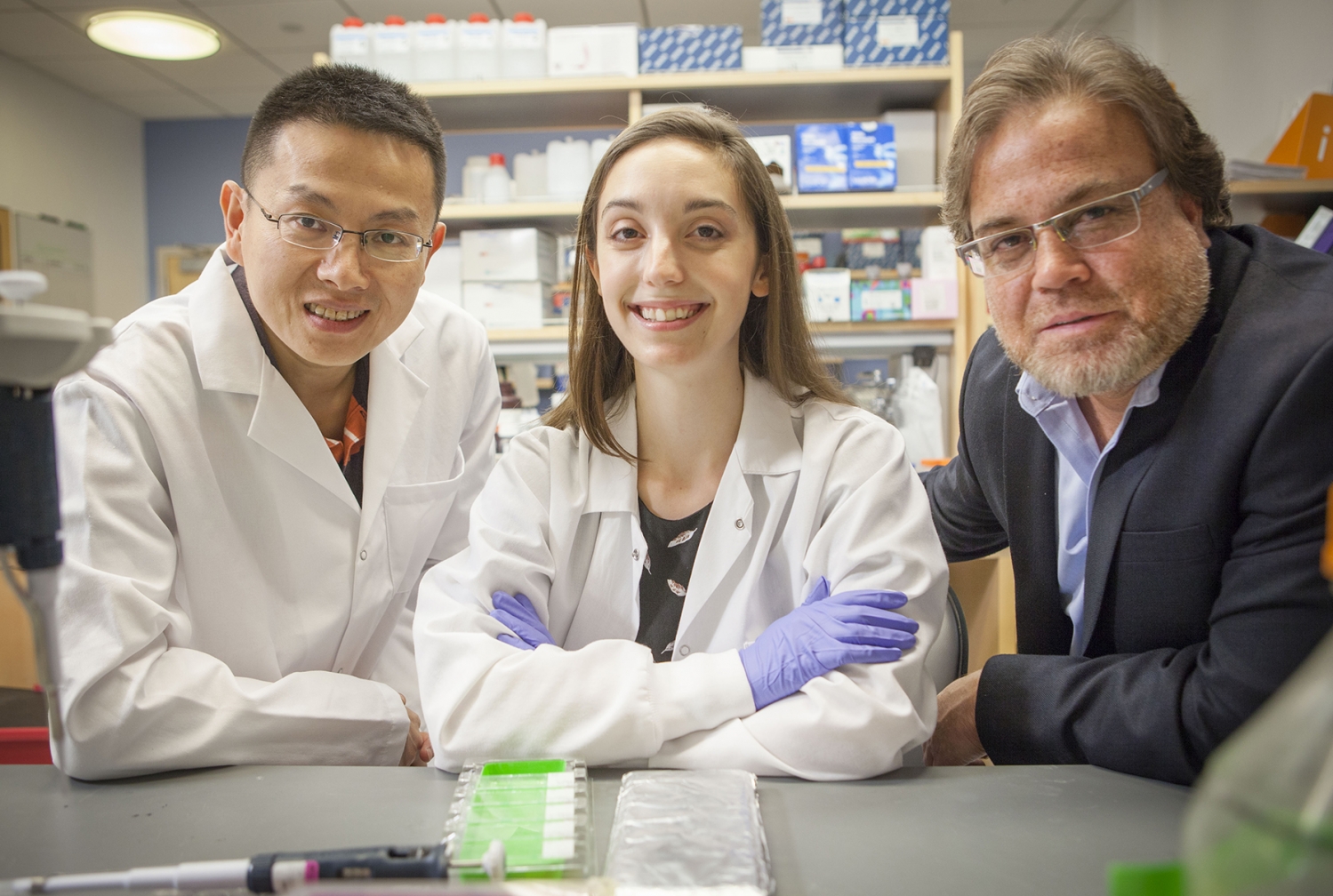 Breast cancer cells do not undergo a commonly accepted transformation in order to spread to distant organs such as the lungs, Weill Cornell Medicine investigators have found in a new study. This discovery may settle a longstanding debate about how cancers spread, the investigators say, and may profoundly change the way many forms of the disease are treated.

For more than a decade, many researchers have believed that a biological process that transforms the shape of cells that line cavities, organs and blood vessels in the body was necessary for metastasis. Epithelial to mesenchymal transition, or EMT, strips away the cells' ability to hold on tightly to their neighbors, allowing them to migrate throughout the body. During fetal development, EMT provides a way for cells in the embryo to travel long distances for the generation of complex organs and bony appendages. Cancer biologists in the early ‘90s discovered that a subpopulation of tumor cells behaved the same way, positing that EMT gave cancer cells "legs" upon which to crawl away from a tumor. But other scientists have questioned the theory, and a vigorous controversy has ensued.

In their study, published Nov. 11 in Nature, Weill Cornell Medicine investigators discovered that while EMT occurred in a small number of primary breast tumor cells, they were not involved in cancer metastasis. What's more, metastasis was derived from non-EMT cancer cells, contradicting the common theory about how cancers spread. About 90 percent of all cancer-related deaths are due to metastasis. Strikingly, the EMT status changed with the addition of chemotherapy. The recurrent lung metastases that appeared after chemotherapy treatment were from EMT tumor cells, indicating that EMT contributes to the survival of chemoresistant tumor cells. Their findings may offer a more effective treatment strategy for metastatic breast cancer and many other kinds of cancer. 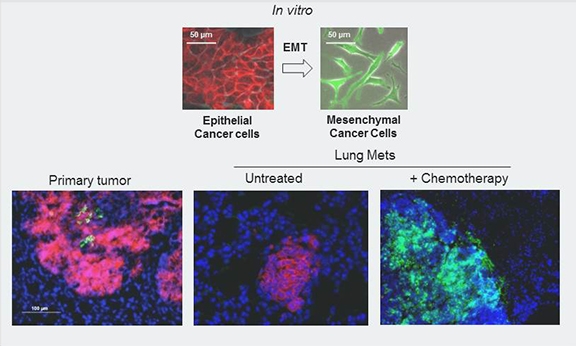 The top panel of this image shows breast cancer cells designed to change from red to green when they transition from epithelial to mesenchymal through the EMT. The bottom panel shows breast cancer cells in primary tumors, which progress to generate red metastatic nodules in the lung. Chemotherapy ablates the red nodules and generates green EMT nodules. Image credit: Mittal lab

"EMT has been considered cancer's Achilles heel, and now we show that this is true, but not in the way many thought," said co-senior author Dr. Vivek Mittal, an associate professor of cell and developmental biology in cardiothoracic surgery and of cell and developmental biology at Weill Cornell Medicine, director of the institution's Neuberger Berman Foundation Lung Cancer Research Center Laboratory, and a member of its Sandra and Edward Meyer Cancer Center.

"There is a substantial effort underway to develop drugs aimed at reversing the EMT process in order to halt metastasis, but our findings suggest that this approach may not work," he added. "Instead, we suggest combining chemotherapy with a drug that blocks EMT as the first treatment given to breast cancer patients — and likely others with cancer as well."

"Our study clarified a longstanding question in the field by finding that lung metastases mainly arise from tumor cells that have not undergone EMT," said co-senior author Dr. Ding Cheng Gao, an assistant professor of cell and developmental biology in cardiothoracic surgery and of cell and developmental biology, and a member of the Meyer Cancer Center at Weill Cornell Medicine. "However, the EMT tumor cells appear more resistant to chemotherapy, suggesting that the combination of anti-EMT approach and traditional chemotherapy is a better way for combating the deadly metastatic disease." 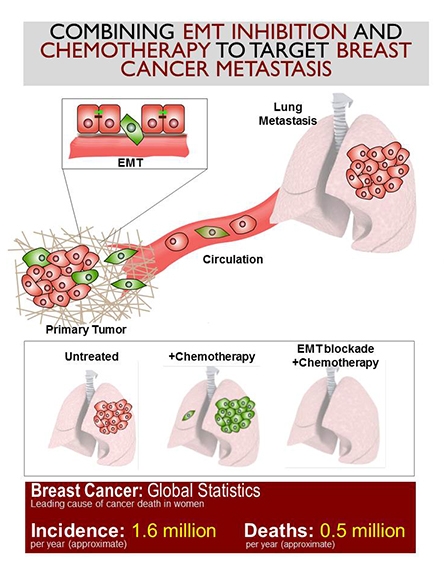 "As would be expected, we found that within a predominantly epithelial primary tumor, a small portion of tumor cells had undergone EMT," Dr. Mittal said.

But strikingly they also found that cells that metastasized to the lung were red, not green. "This finding was unexpected and suggested that the general notion that EMT is important for generating metastasis was not correct," he said.

To confirm their discovery, the researchers blocked EMT with an inhibitor and found it had no effect on metastasis to the lungs. Then they investigated what happened after the mice received chemotherapy. The chemo treatment efficiently eliminated the glowing red cells — including those in the lungs — but not the green EMT tumor cells. Researchers then observed green metastatic lesions in the lung, which are derived from the EMT cancer cells.

"This can explain why patients initially respond to chemotherapy, only to find later that the cancer has spread because of chemoresistant EMT tumor cells," Dr. Mittal said.

Researchers then tested a therapy that combines chemotherapy with their experimental EMT blocker and found that no metastasis — and no chemoresistance — occurred in the mice.

"The EMT was a wonderfully compelling explanation for how metastasis could occur, and we certainly did not expect these findings," said first author Kari Fischer, a doctoral candidate in the Weill Cornell Graduate School of Medical Sciences. "Hopefully this will redirect efforts toward other explanations for how epithelial cancer cells move. In the meantime, we have made very exciting inroads towards discovering the root of chemoresistance."

Drs. Gao and Mittal are now using their EMT lineage tracing system as a platform to develop and test combination therapies that can be used in patients that will eliminate both epithelial and drug-resistant EMT cancer cells. The translation of their findings could aid the 90 percent of late stage metastatic patients with treatment-refractory disease.