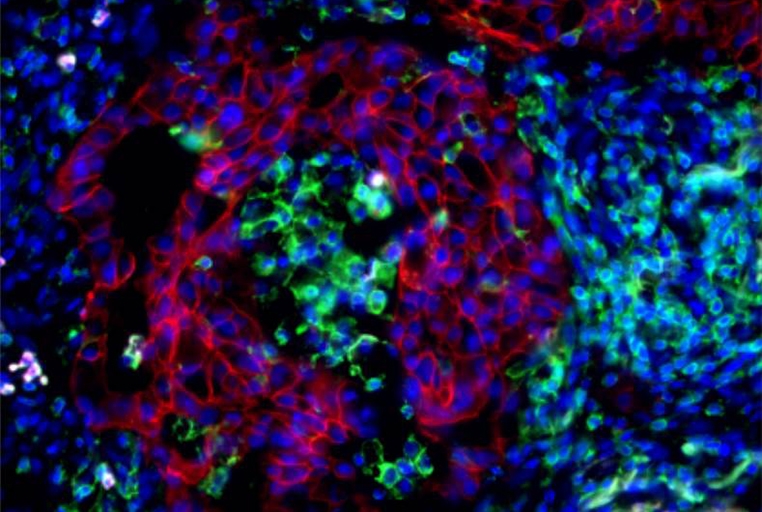 Lung cancers attract circulating immune cells to the tumor mass, where the cancer reprograms them to support its growth and progression, researchers from Weill Cornell Medical College found in a new study. Their discovery sheds light on how tumors establish a microenvironment that enables them to flourish, and may offer an effective new target for anti-cancer drugs.

In their study, published June 5 in PLOS ONE, the investigators detected a high concentration of bone marrow-derived immune cells, called myeloid cells, inside human lung tumors that had been surgically removed from cancer patients. An analysis revealed that the myeloid cells the investigators found nesting in compartments within the tumor bed had a different genetic composition than those in the relatively healthy part of the lung about 5-10 centimeters away from the cancer lesion, suggesting that they had been changed to support cancer growth. Investigators say these reprogrammed cells and the genes they express could be leveraged for targeted therapies.

"Traditional cancer therapies often don't work well because the cancer continually mutates its genes as a way to escape the drugs," said co-senior author Dr. Vivek Mittal, an associate professor of cell and developmental biology in cardiothoracic surgery at Weill Cornell. "By contrast, immune cells have no mutations. They simply change expression of their genes — which can be turned on or off by drugs, as needed.

"What we found is quite exciting," added Dr. Mittal, who is also director of the Neuberger Berman Foundation Lung Cancer Center Laboratory at Weill Cornell. "We discovered a process within the tumor that suggests we can combine new drugs, such as immunotherapies, with standard treatment."

"This study highlights how cancer cells can capture and subvert the cells of the immune system in a manner that supports cancer growth," said co-senior author Dr. Nasser Altorki, director of the Division of Thoracic Surgery at Weill Cornell Medical College and NewYork-Presbyterian/Weill Cornell Medical Center and the Gerald J. Ford-Wayne Isom Research Professor in Cardiothoracic Surgery at Weill Cornell. "An understanding of how that happens will allow us to design treatments that either prevent or reverse these events, thus restoring the capacity of the immune cells to contain and kill the cancer."

The study extends previous preclinical work by Dr. Mittal's team that revealed complex communication networks between the lung tumors and their surrounding microenvironment, which is comprised of blood vessels, immune cells, connective tissue and structural cells. That study, published in February in Cell Reports, was the first analysis of how a tumor globally reprograms host immune cells, and its findings opened the door to understanding how these networks can ultimately be dismantled.

Building on that earlier study, researchers from Weill Cornell and the Wistar Institute in Philadelphia sought to understand what happens to myeloid cells once they are recruited into the tumor microenvironment in human lung cancer. They extracted individual cells directly from the fresh lung tumors and conducted a gene expression test to accurately measure the activity of every gene. They found that between 80-100 genes were expressed differently in myeloid cells within the tumor mass compared to normal tissue from the lungs of the same patient, revealing potentially new drug targets.

"This would not have been possible if we had examined whole tumor tissues, and not individual myeloid cells of the tumor," Dr. Mittal said.

"This is a fresh approach because targeting activated genes in these cells may substantially delay or stop tumor growth," he added, "and would not affect normal cells because these gene targets are not present." Moreover, targeting these genes may complement existing conventional therapies that specifically target cancer cells.

Dr. Mittal's laboratory is now exploring how activated genes in the reprogrammed immune cells function in a preclinical study.