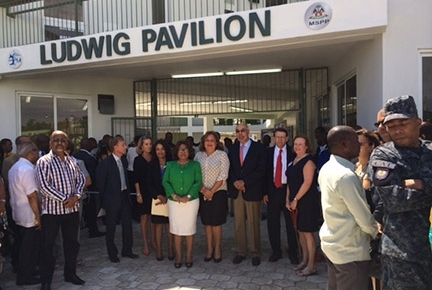 A ribbon-cutting ceremony on March 23 commemorates the opening of GHESKIO's new tuberculosis hospital in Port-au-Prince, Haiti.

In a major advance in the fight against drug-resistant tuberculosis, the Haitian Study Group on Opportunistic Infections and Kaposi's Sarcoma, or GHESKIO, has opened a state-of-the-art hospital in Port-au-Prince, Haiti, to treat patients suffering from the disease.

The hospital's opening comes five years after a catastrophic earthquake crippled Haiti's infrastructure and destroyed the five major TB hospitals in the capital city, including the one run by GHESKIO. GHESKIO is a nongovernmental service, research and training center that operates in partnership with Weill Cornell Medical College and the Haitian Ministry of Health. It provides integrated primary care services, including HIV counseling, AIDS care, prenatal care and management of TB, cholera and other infectious diseases, as well as global health and educational services to more than 500,000 of the poorest Haitians. Since its inception in 1982, GHESKIO has become one of the largest AIDS and TB treatment centers in the Americas.

A ribbon-cutting ceremony on March 23 commemorated the hospital's opening and recognized the global medical technology firm Becton-Dickinson (BD), which gave a $1 million gift to support the new hospital. The facility's pavilion was named in honor of Ed Ludwig, former CEO and chairman of BD's Board of Directors, and his wife Kathy, who together also made a generous personal donation. Other major contributors included United States Agency for International Development (USAID), the U.S. Centers for Disease Control and Prevention (CDC), Weill Cornell and GHESKIO.

The new, 35-room open-air hospital will provide patients with a comfortable place to stay while they receive treatment. Its design is reminiscent of a hotel, with a garden and open space, lots of sunlight and air flow — from east to west, south to north — at all times.

As a state-of-the-art facility and site for clinical trials, physicians will be able to provide the most advanced clinical care to their patients, who will in turn receive the best new medicines to treat their disease.

"We do not have good drugs to treat this disease," said Dr. Jean W. Pape, a professor of medicine at Weill Cornell and founder and director of GHESKIO. "The drugs available to us have horrible side effects, and people get sicker from the drugs than the disease itself. By participating in clinical trials, we hope to improve the lives of our patients in Haiti and around the world." 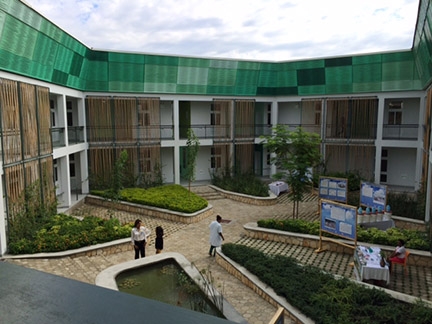 The courtyard of GHESKIO's new, state-of-the-art hospital in Port-au-Prince, Haiti.

A worldwide public health crisis, tuberculosis is second only to HIV/AIDS as the leading cause of death due to a single infectious agent. Some 9 million people became ill with the disease in 2013, and 1.5 million died from it, according to the World Health Organization.

While the most common form of the disease can be treated in six months, the multidrug-resistant form requires a significantly more intense treatment strategy that lasts 18 months to two years. Even in the best case scenario, mortality for the drug resistant form remains high with the available drugs.

Since the earthquake, many Haitians in Port-au-Prince — including those with tuberculosis — have had to live in crowded tent cities, making people there more vulnerable to infection. Given the long duration of treatment and the lack of a TB hospital, GHESKIO's doctors have had to treat patients with the drug-resistant form of the disease in a temporary field hospital.

"This new hospital is going to provide patients with a comfortable and beautiful place to receive treatment," said Dr. Daniel Fitzgerald, co-director of Weill Cornell's Center for Global Health and an associate professor of medicine. "I think this hospital is a source of pride after the earthquake, and it symbolizes that Haiti is moving forward."

A laboratory located just next door from the hospital is equipped with cutting-edge technology, enabling physician-scientists to conduct advanced research to discover the molecular underpinnings of TB resistance. Weill Cornell was recently awarded a seven-year grant by the National Institute of Allergy and Infectious Diseases of the National Institutes of Health to support this work.

The laboratory's proximity to the hospital ensures that breakthroughs made at the bench can be rapidly translated into new treatments and therapies for patients, and that observations made by clinicians can open new lines of scientific inquiry in the lab. 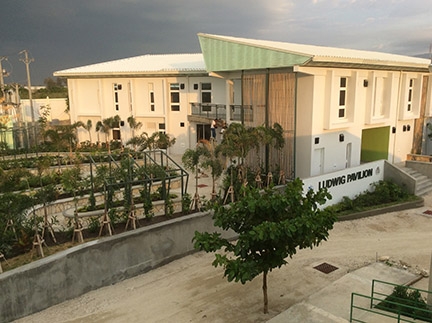 A wider view of the Ludwig Pavillion of GHESKIO's new hospital.

"We now have the last piece of the puzzle that makes us an unbeatable clinical research team," Dr. Pape said. "We can now treat patients in a dignified way, and we have all of the tools to conduct good clinical research. Our patients will give us the opportunity to answer important research questions that have remained unanswered up until now."

"It's really an amazing opportunity, not just for Haiti, GHESKIO and Weill Cornell, but also for the world as we embark on this new research endeavor."

The new facility was a combined effort of engineering firms from the United States and Haiti. It was conceived and supervised by MASS Design Group, headquartered in Boston, built by Chantiers d'Haiti and supervised by GBS, another Haitian firm. It is the product of an international collaboration between key stakeholders, including Weill Cornell, GHESKIO, the Haitian and United States governments, the CDC, USAID and the Global Fund, which works with local governments, civil society and the private sector to help end of AIDS, TB and malaria epidemics.

"If each of your organizations had decided to build a hospital, yes, you probably could have," said U.S. Ambassador to Haiti Pamela A. White at the inauguration. "But the hospitals you built alone would not be nearly so impressive, so ambitious or so inventive. Because you worked together, you have created something that will last for decades and serve as an example to people around the world of what dynamic partnerships can produce."

"When it comes to doing good," added Sophia Martelly, first lady of the Republic of Haiti, "limits do not exist. When it comes to improving the human condition, the boundaries are only words. When one is guided by this humanistic vision and solidarity and when one is alive with perseverance, nothing is impossible."