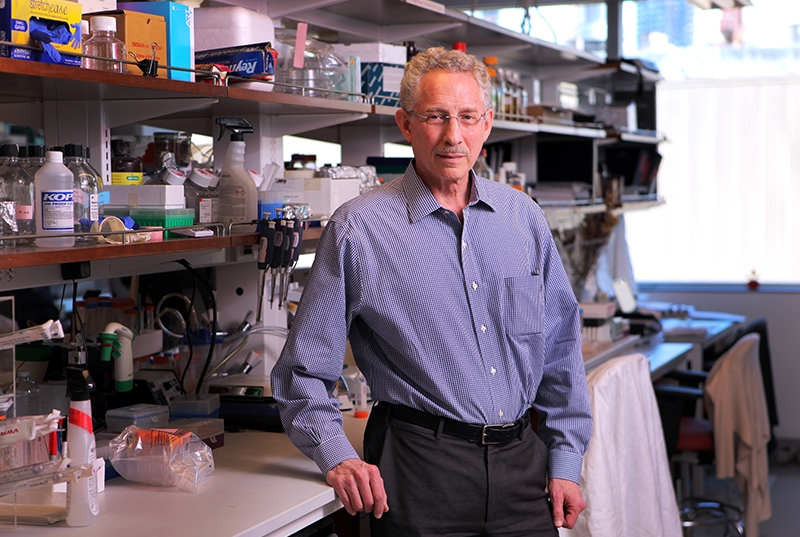 NEW YORK (February 18, 2015) — In an effort to stop tuberculosis (TB) from becoming progressively less treatable worldwide, the National Institutes of Health has awarded Weill Cornell Medical College more than $6.2 million in first-year funding to support a research collaboration among six institutions in close alliance with voluntary pharmaceutical partners. The total funding, provided by the National Institute of Allergy and Infectious Diseases, could be up to $45.7 million over seven years. 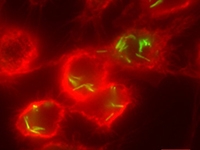 The bacteria that causes tuberculosis is infecting macrophages, the host cell that plays a key role in defense against the bacteria. Photo credit: Ruojun Wang

TB-causing bacteria are increasingly becoming resistant to the most commonly used treatments, presenting a growing problem in a globalized world, says TB Research Unit principal investigator Dr. Carl Nathan, chair of the Department of Microbiology and Immunology at Weill Cornell. For patients who don't respond to those drugs, the infection can require more than two years of therapy with multiple, toxic and expensive alternatives, which often fail. When TB, which is spread through the air, is not effectively treated, it is usually lethal.

"Neither academia nor pharma can solve this problem working alone. We have to work together to improve treatment of tuberculosis, or it will continue to spread and become even more resistant to treatment than it is today," says Dr. Nathan, who is also director of the Abby and Howard P. Milstein Program in Translational Medicine.

Dr. Michael Glickman, an infectious disease specialist and Alfred Sloan Chair at Memorial Sloan Kettering Cancer Center, serves as the TB Research Unit's co-principal investigator. He notes that TB is the single leading cause of death from a bacterial infection, and the second leading cause of death from any pathogen. One in three people globally is infected with the bacteria that cause TB. Of those people, between 5 and 10 percent eventually develop the active disease. Each person with an active case of untreated TB may go on to infect 10 or 20 additional people. There are millions of infections and deaths each year from TB — in 2013, an estimated 9 million new cases were reported and 1.5 million people died, according to the World Health Organization.

"The incredible concentration of TB expertise in the Tri-Institutional community, which includes investigators studying human genetics of TB susceptibility, microbiology, and immunology, constitutes a formidable research team to contribute to tackling these problems," Dr. Glickman says.

The TB Research Unit is designed to help address significant gaps in understanding how TB bacteria establish and maintain infection in the human body as well as how agents might attack vulnerabilities in the bacteria.

The most common form of TB is distinctive in that humans are its only natural host. Because the TB bacterium has co-evolved with humans for tens of thousands of years, it "has learned enough about our immune systems to survive our efforts to eliminate it," Dr. Nathan says. Two issues have plagued those efforts: persistence, the ability of TB bacteria to enter a drug-tolerant state, and latency, the capacity of the bacteria to hide within a person for decades before resuming growth and causing disease.

Current TB drugs take months to treat latent and persistent disease, Dr. Nathan says. The drug isoniazid was first tested in the United States in 1952 by a Cornell physician and remains a mainstay, he says. "Most of today's TB drugs are old and would likely not pass federal approval if introduced today," Dr. Nathan says.

The Tuberculosis Research Unit involves two parallel tracks. The first, overseen by Dr. Glickman, addresses TB infection biology in patients, and the center of this work shifts to Haiti, where TB, including drug-resistant TB, is a major health problem. 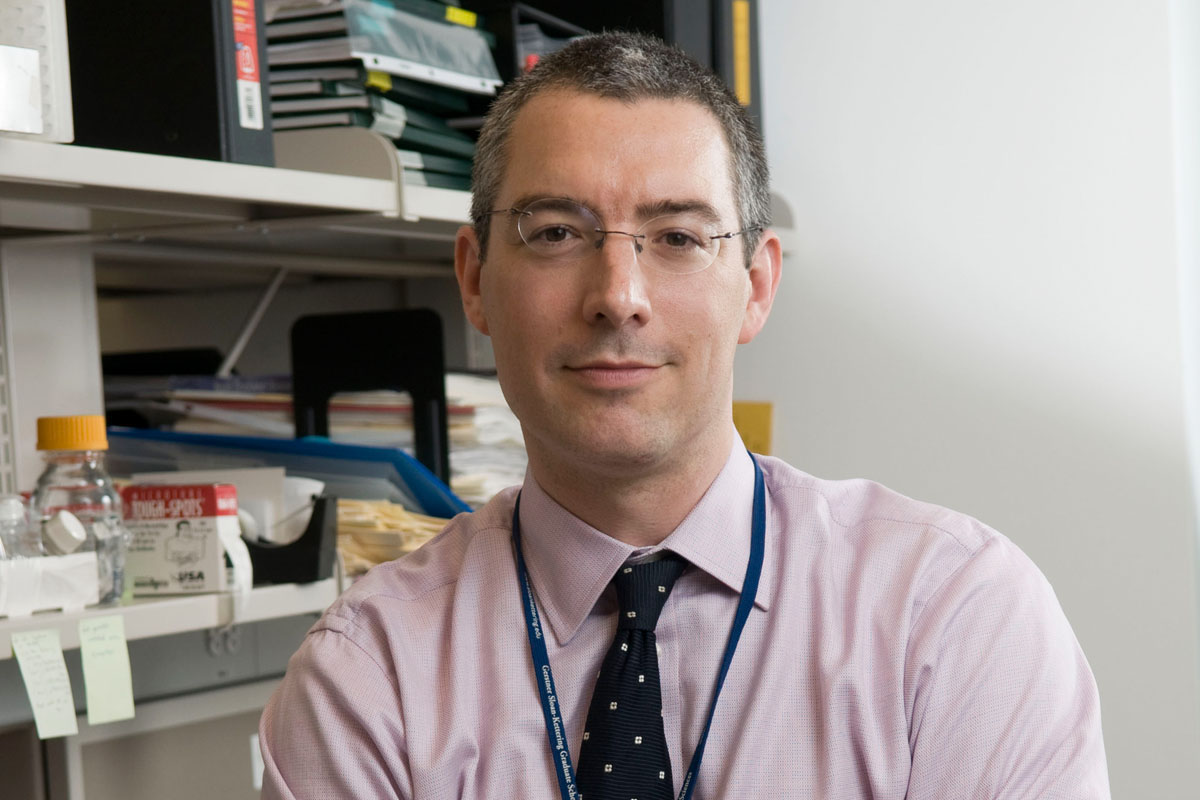 With the help of patients at Weill Cornell's GHESKIO clinic in Haiti, overseen by Weill Cornell physicians Drs. Jean Pape and Daniel Fitzgerald, researchers will investigate biological factors that affect the course of TB infection — and likely treatment. For example, a participating group of researchers from Rockefeller University led by Drs. Jean-Laurent Casanova and Laurent Abel have found a gene that appears to control susceptibility to reactivation of TB infection in young adults. They will search for other such genes to help explain why only a minority of individuals with latent infection develop clinical disease, while the majority remain disease-free. Dr. Glickman's group will study the expression of genes by blood cells that may provide markers of resistance to initial infection and an early indication of treatment response. He will also investigate the effect of special types of lymphocytes and the role of composition of the intestinal bacteria in resistance to infection and response to therapy. Dr. Nathan's group, working with Dr. Fitzgerald, will study a subset of TB bacteria in patients' sputum that is undetected by standard techniques but may be largely responsible for persistence.

The hope is that these studies will identify compounds, biomarkers and genetic susceptibilities, to be tested in future clinical trials, which can shorten treatment, eliminate latency and overcome persistence. "Only in this way will we finally turn the tide of tuberculosis," Dr. Nathan says.

The second, parallel track of the grant, led by Dr. Nathan, continues and expands ongoing efforts by investigators at Weill Cornell and other institutions who have been working with the Bill & Melinda Gates Foundation's TB Drug Accelerator. In that program, pharmaceutical companies provide chemical compounds that academic labs test in diverse ways, seeking compounds with new mechanisms of action. The active compounds, called "hits," must pass through a gauntlet of increasingly stringent tests, often undergoing extensive chemical modifications, before they qualify as "leads" that can be considered for later stages of drug development.

In this "hit-to-lead" work, researchers seek the active compounds that are most potent and least toxic, try to identify their molecular targets, and test whether their properties can be improved. In particular, Dr. Nathan's lab tests if the compounds can kill persistent TB bacteria. These tests were developed in response to ongoing studies of TB's biology, including its genetics and the genetics of the host response, Dr. Nathan says.

Through the Drug Accelerator program and related collaborations, multiple drug companies have allowed Dr. Nathan's team to screen more than 1.3 million compounds. Such open access to company compound collections "is almost unheard of," says Dr. Nathan, "particularly when access is granted to the same academics by several companies at once.

"This is door-opening for university researchers, who would not otherwise have access to compounds of this quality. Equally important is the side-by-side partnership with the companies' scientists, who provide specialized knowledge about working with, analyzing, and improving the compounds," he said.

Collaborators at the University of Kansas will produce new versions of some of the most promising compounds. Researchers at Rutgers New Jersey Medical School will study the pharmacologic behavior of the compounds in mice. Dr. Glickman is contributing a family of promising antimicrobial chemicals that he discovered in his own research. Dr. Nathan's colleagues at Weill Cornell, Drs. Dirk Schnappinger, Sabine Ehrt and Kyu Rhee, are focusing their efforts on identifying molecular targets that the compounds could most profitably attack and those that the most advanced compounds inhibit.

We are the world's oldest and largest private cancer center, home to more than 13,000 physicians, scientists, nurses, and staff united by a relentless dedication to conquering cancer. As an independent institution, we combine 130 years of research and clinical leadership with the freedom to provide highly individualized, exceptional care to each patient. And our always-evolving educational programs continue to train new leaders in the field, here and around the world. For more information, go to http://www.mskcc.org.