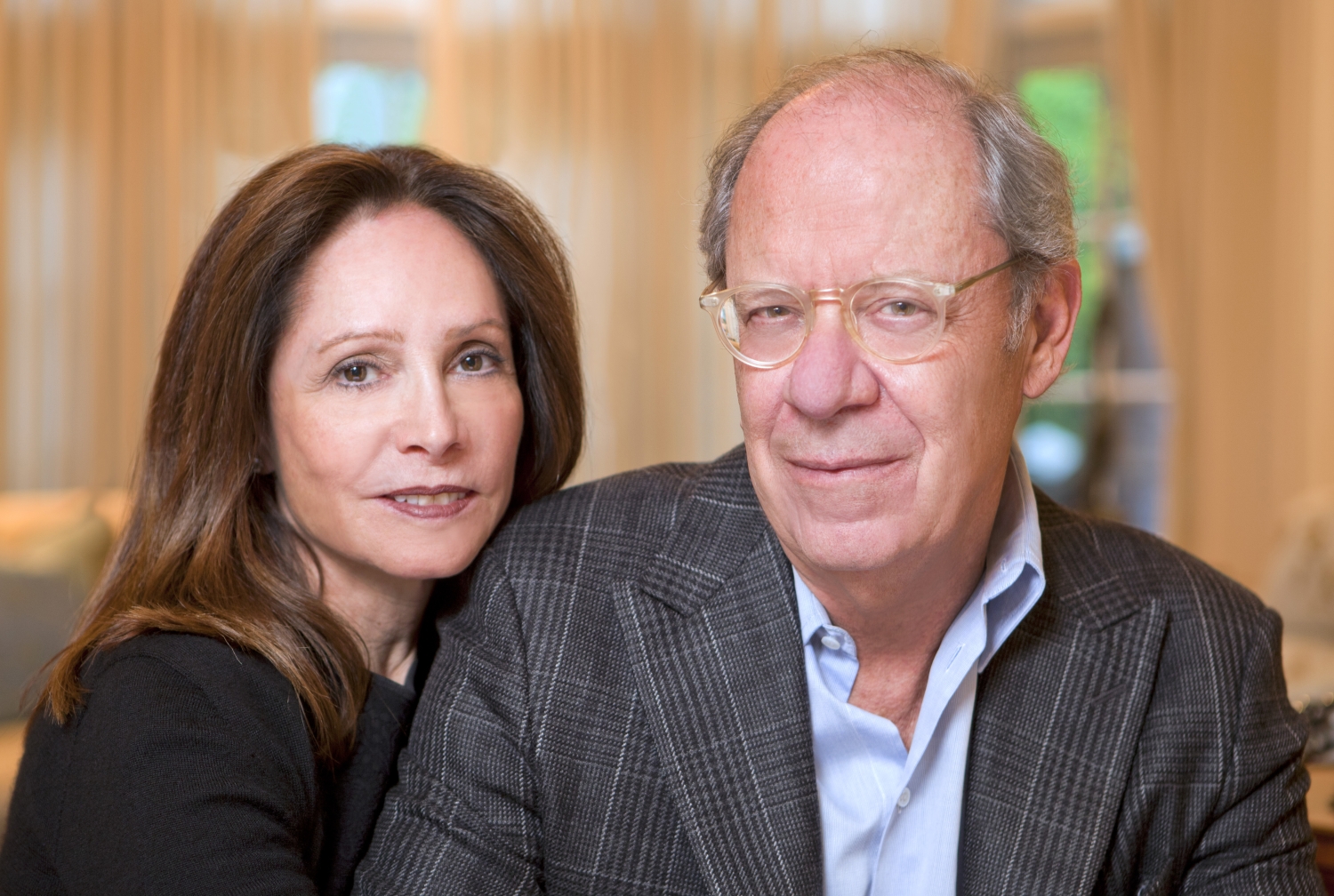 NEW YORK (December 4, 2014) — Weill Cornell Medical College announced today that it has received a $25 million gift from Gale and Ira Drukier to establish a premier, cross-disciplinary institute dedicated to understanding the underlying causes of diseases that are devastating to children. Its goal will be to rapidly translate basic research breakthroughs into the most advanced therapies for patients.

The extraordinary gift names the Gale and Ira Drukier Institute for Children's Health and will enable the medical college to recruit a team of leading scientists, including a renowned expert who will serve as the Gale and Ira Drukier Director, to pursue innovative research that improves treatments and therapies for the littlest patients. The Drukier Institute, a marquee program that will be headquartered on the 12th floor of Weill Cornell's new Belfer Research Building, will also expand and enhance the medical college's already-distinguished research and clinical care programs that strive to end diseases and disorders that affect children and adolescents, including asthma, autism, cancer, cardiovascular disease, infectious diseases and schizophrenia."We couldn't be more grateful to Gale and Ira, whose generous gift exemplifies their commitment to advancing human health and their steadfast support of Weill Cornell Medical College," said Sanford I. Weill, chairman of the Weill Cornell Board of Overseers. "The Drukiers' investment will better the lives of children in New York and beyond, and will leave a lasting mark on our next generation."

"We are greatly appreciative of Gale and Ira Drukier, whose remarkable gift will enable Weill Cornell to expand its world-class research and clinical care programs for children, who can't be treated like little adults," said Dr. Laurie H. Glimcher, the Stephen and Suzanne Weiss Dean of Weill Cornell Medical College. "The Drukiers' generosity is critical in allowing us to attract the best and brightest minds in pediatric research, who will lead the way as we pursue innovative treatments and therapies that will ensure the health of children now and in the future."

"As parents and grandparents, Gale and I appreciate the tremendous impact medicine can have on growing children," said Dr. Ira Drukier, a member of the Weill Cornell Board of Overseers. "When you cure children, you give them their entire life back. It's with immense pride that we are able to make this investment, which will empower Weill Cornell Medical College to focus and direct all of its outstanding pediatric research under the auspices of one institute and provide vital resources to develop tomorrow's treatments and cures."

"It gives us great joy to be able to support Weill Cornell Medical College and make such a tremendous difference in children's lives," Dr. Gale Drukier said. "This gift also continues our enduring relationship with Cornell University, with which we have been connected for 40 years."

The Drukiers have a legacy of philanthropy at Cornell University, having provided generous support to its Herbert F. Johnson Art Museum and College of Architecture, Art and Planning.

"We at Cornell are immensely grateful to Gale and Ira Drukier for their extraordinary leadership and generosity, which has already been felt across the university," President David Skorton said. "With this spectacular new gift, the Drukiers are enabling us to achieve an unprecedented level of excellence in pediatric research. The bench-to-bedside approach of the Drukier Institute will have a lasting impact on children and their families, giving hope when they need it most."

"The gift from Gale and Ira Drukier establishing the Drukier Institute for Children's Health makes a powerful statement about the importance of focusing the energies of a major research institution on improving the health and wellbeing of children," said Dr. Gerald M. Loughlin, the Nancy C. Paduano Professor of Pediatrics and chairman of the Department of Pediatrics at Weill Cornell Medical College and pediatrician-in-chief at NewYork-Presbyterian/Weill Cornell Medical Center. "It is a wonderful legacy for these visionary philanthropists."

Caring for children is particularly challenging because their bodies are constantly changing as they grow, and their metabolisms and immune systems are vastly different than those of adults. Understanding the factors that spur growth in children can present possible lines of inquiry into other diseases, such as cancer, because tumors are also programmed to grow. There are also many genetic and developmental diseases that arise in childhood and pose serious health risks during adulthood. But treating these conditions can be arduous for pediatric patients. Many of the common treatments and therapies available to adults have toxic effects on children, making it critical to devise new and better interventions.

Using genomics and other cutting-edge research approaches, the cross-disciplinary Drukier Institute will drive excellence and innovation in pediatrics, seeking to rapidly and seamlessly catalyze research breakthroughs into the most advanced, safe and effective patient care. The Drukiers' generosity will empower the medical college to recruit five top-flight investigators — including a faculty member who conducts clinical research in pediatric genetics — to augment the distinguished team of physician-scientists already at Weill Cornell, as well as train the next generation of researchers in the field.

To help realize this vision, the Drukiers' gift will enable Weill Cornell to secure the latest research equipment, such as sequencing and informatics technology, as well as develop an infrastructure to establish a biobank. Investigators at the institute will work in close collaboration with clinicians in Weill Cornell's Department of Pediatrics to ensure that children immediately benefit from the latest research advances.

To encourage and support faculty development, research and education, the gift will endow the Drukier Lectureship, an annual lecture at Weill Cornell on a research or clinical topic in the field of children's health. It will also establish the Drukier Prize, which will be awarded once a year to a junior faculty member in the United States or abroad for excellence and achievement in advancing research on childhood diseases or disorders.

About Gale and Ira Drukier

A Cornell University graduate, Ira Drukier is co-owner of BD Hotels, LLC, a real estate development company that owns and operates more than two-dozen hotel properties in New York City, including the Mercer, Hotel Elysee and the Maritime.

Dr. Drukier graduated from Cornell in 1966 with a Bachelor of Science in Engineering with a focus on solid-state physics and in 1967 with a Master in Engineering, earning a doctorate in electrical engineering in 1973 from the Polytechnic Institute of Brooklyn. Upon graduation, he joined RCA Corporation's David Sarnoff Research Center, conducting research in the field of microwave semiconductors, which culminated in his development of the first high-power compound semiconductor field effect transistor. In 1976, he joined Microwave Semiconductor Corporation (MSC) and established a division to develop and manufacture high-power microwave transistors for commercial and military use. Siemens Corporation acquired MSC in 1981, and Dr. Drukier stayed on as corporate vice president until 1983, when he ventured into a career in real estate.

Dr. Drukier has served on the Weill Cornell Board of Overseers since 2012, sat on Cornell University's Board of Trustees for eight years and was a member of the Cornell Tech Task Force to help develop the Cornell NYC Tech campus on Roosevelt Island. He is chair of the council for the Johnson Art Museum at Cornell, chair of the board of trustees building committee of the Parrish Art Museum in Southampton, N.Y., and serves on the Metropolitan Museum of Art's President's Council. Dr. Drukier is vice-chair of the American Society for Yad Vashem and is a member of the Museum of Jewish Heritage's Board of Overseers. He has also published numerous papers and given lectures in the field of microwave electronics and has contributed a chapter to a book on Gallium Arsenide Field Effect Transistors.

Gale Drukier graduated from New York University's Steinhardt School of Culture, Education and Human Development in 1972 with a degree in speech pathology and audiology, later earning a Master of Science ('73) and a Doctor of Education degree ('79) in audiology from Teacher's College at Columbia University. Dr. Drukier began her career as an audiologist at Bellevue Hospital and at Veterans Affairs hospitals in metropolitan New York, later joining Trenton State University — now the College of New Jersey — as a professor. During her 17-year tenure there, Dr. Drukier conducted research, taught and developed the college's nationally accredited graduate program in audiology. She was consistently recognized by her students as the "Best Teacher." After retiring from teaching, Dr. Drukier joined her family's business, BD Hotels, and has managed and renovated properties on Manhattan's West Side for more than 12 years.

Dr. Drukier has continued to serve NYU since her graduation. She has been a member of the Steinhardt Dean's Council since 2005 as a supporter of the educational and fundraising initiatives of the school. In 2007, Dr. Drukier joined the NYU Board of Trustees and presently chairs its Academic Affairs Committee. In 2010, Dr. Drukier endowed and named the deanship of NYU's Steinhardt School of Education. She was awarded the Meritorious Service Award by NYU in 2013.

Dr. Drukier has also been active at Cornell University, chairing the Herbert F. Johnson Museum of Art's Program Committee and is a member of the Plantations Council. Dr. Drukier and her husband endowed the deanship at Cornell's College of Architecture, Art and Planning, endowed the curator of prints and drawings at the Herbert F. Johnson Museum and created a garden at Plantations at Cornell University. The couple is also active in the Parrish Art Museum in Southampton, N.Y., and serves on the Metropolitan Museum of Art's President's Council. Dr. Drukier is an animal lover, particularly of felines, and is on the board of directors of the Animal Rescue Fund of the Hamptons. The Drukiers have one daughter and four grandchildren.