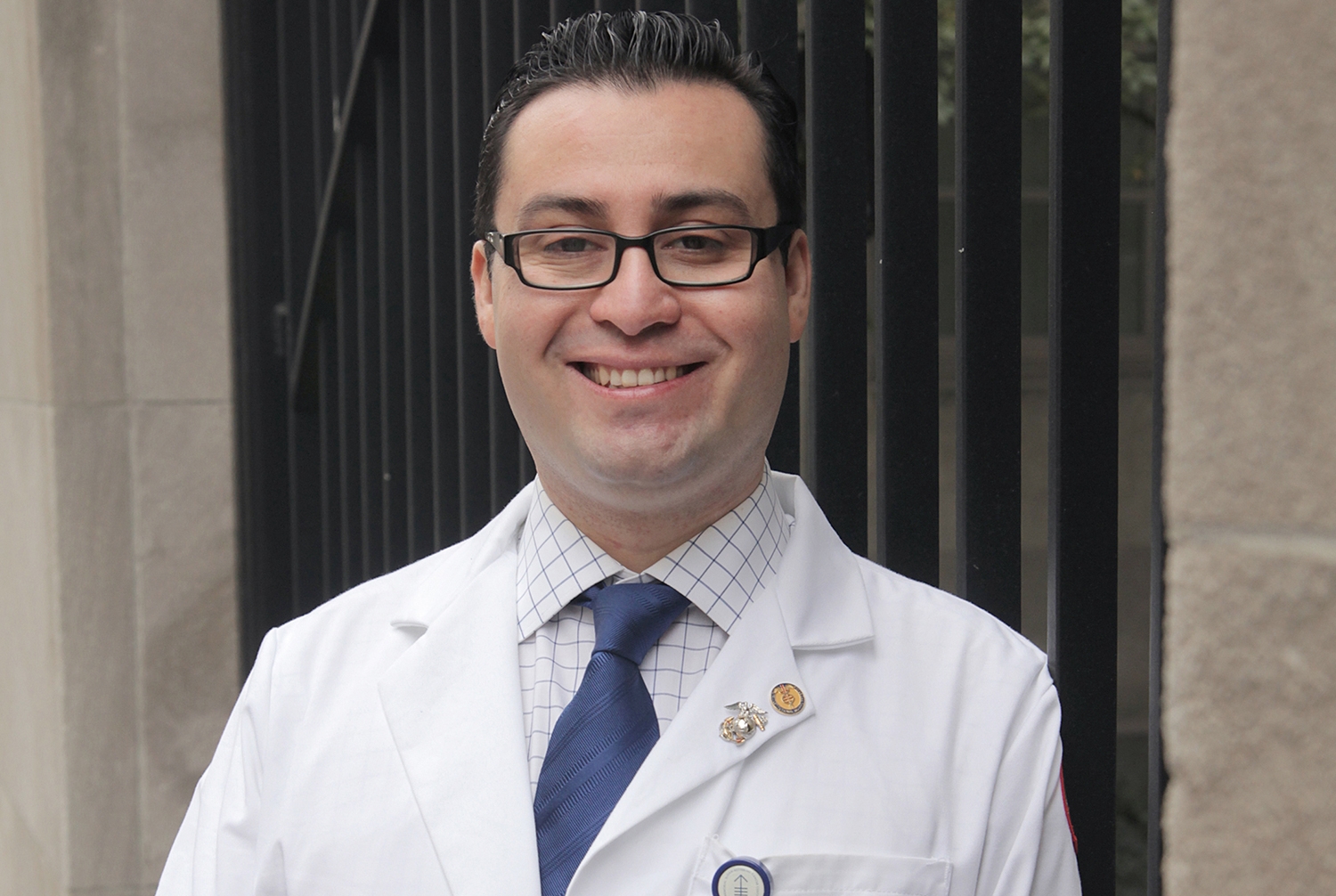 Even before he began his medical training at Weill Cornell Medical College, Jimmy Castellanos was no stranger to demanding situations.

The son of immigrant parents who fled El Salvador during its civil war in the '80s, Castellanos enlisted in the U.S. Marine Corps in 2001 and spent 2004 at Al Asad Airbase in Iraq, about 90 miles north of Baghdad. He and his family had lived the American Dream, and military service was his way of giving back.

Then, five weeks into his tour, insurgents attacked his base. His roommate was killed in front of him. Three of his fellow platoon mates were injured that day; one was paralyzed. Castellanos watched as doctors tended to the wounded."Seeing how doctors treated them and their way of service appealed to me," said Castellanos, 31, of Los Angeles. "I wanted to serve the world in better, peaceful ways, and medicine was it. I decided to lay down my rifle and finish the last two months of my deployment without a weapon."

Now Castellanos is following his dream as a third-year M.D.-Ph.D. student at Weill Cornell. He is one of at least six veterans and reservists enrolled at the medical college — three medical students, two M.D.-Ph.D. students and one physician assistant student — whose dedication to service led them from the military to medicine.

"There are a few of us in school," said fourth-year medical student Luis Villegas, 33, of Miami, who enlisted in the U.S. Army after high school. "The reality is that most veterans who return from service don’t go back to college. They may be struggling with post-traumatic stress disorder, a service-related injury or the simple readjustment to civilian life.

"But pursuing an education is one of the best ways to readjust and get started on the next part of life," he said. "I would like veterans to know that a lot of places — medical schools in particular — are really open to what veterans have to offer."

That's especially true at Weill Cornell, whose leaders encourage veterans to come to the medical college and share their unique perspectives on medicine, commitment and service. To help do just that, Dr. Laurie H. Glimcher, the Stephen and Suzanne Weiss Dean of Weill Cornell, earlier this year approved the medical college's participation in the U.S. Department of Veterans Affairs Yellow Ribbon Program, a component of the Post-9/11 GI Bill and one of three funding streams at Weill Cornell that provides veterans with tuition assistance.

Under the GI bill, the federal government provides eligible veterans up to 36 months of education benefits, generally payable for 15 years following release from active duty. Those benefits cover tuition and fees for students who attend an in-state public college or graduate school, or up to $20,232.02 for a private institution, according to the 2014 payment schedule. The Yellow Ribbon Program is designed for students whose costs exceed that defined amount because they either attend out-of-state public or private institutions. Participating institutions provide eligible veterans with supplemental funding to cover the higher costs for tuition and fees, and Veterans Affairs matches that amount.

Weill Cornell is one of three New York City medical schools that participates in the Yellow Ribbon Program and among them provides the greatest financial support to veterans, allocating up to $20,000 for medical students and $24,000 for graduate students, according to Veterans Affairs. Two physician assistant students qualified for the benefit in fiscal 2014. None of the veterans currently enrolled at the medical college are eligible for 2015. Cornell University is also a participating institution.

"My son served as a captain in the U.S. Marine Corps, so it's particularly important to me to provide as much support as we can to all our brave men and women who serve in the military," Dr. Glimcher said. "I'm thrilled that we can offer this invaluable tuition assistance program to our veterans and empower them to deliver exceptional patient care and make groundbreaking research discoveries."

From the Army to Weill Cornell 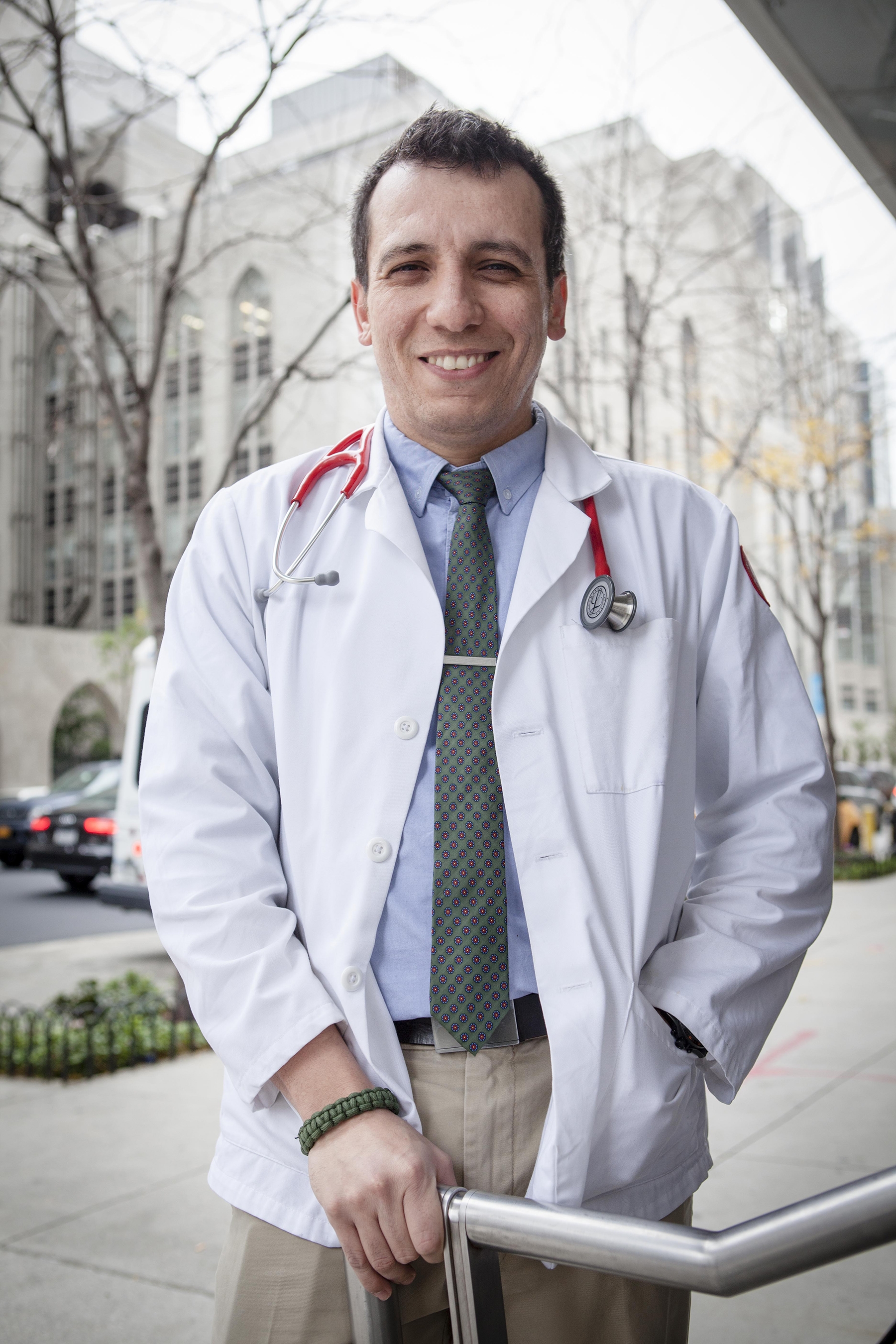 For Villegas, service in the armed forces was as much a family affair as it was a way to realize his medical aspirations. Villegas grew up in a poor neighborhood in Miami and while he dreamt of becoming a doctor, he knew he couldn't immediately afford college. With a family tradition of military service in his native Colombia, Villegas joined the Army in 1999 out of high school.

After four years of active duty, Villegas transferred to a National Guard unit in New York and enrolled at CUNY Hunter as a pre-med student. But he had to put his studies on hold just a few months later, as the Army reactivated him for deployment to Baghdad.

Villegas will never forget when his unit responded to a roadside bomb that killed three foreign aid workers and injured more than a dozen civilians. As medics onsite tended to the wounded, Villegas, who had advanced field medical care training from the Army, came across a security guard who was pinned down in a water-logged ditch after the force of the explosion flung his vehicle off the road. Villegas helped pull the man out safely and transported him to a nearby Army hospital for treatment.

"I definitely wanted to go to medical school before I joined the military, but after serving in Iraq, the reasons for doing it became a lot more real," Villegas said. "During war, you witness some very unfortunate things, but at the same time you witness incredible acts of bravery and compassion. When I think back to my time in service, my best memories are of times when I got to help."

He returned to CUNY Hunter a year later and graduated in 2008. After working at Weill Cornell's leukemia clinical trials unit for two years, he enrolled at the medical college and is pursuing a career in emergency medicine.

"Emergency medicine is very much like the military — it's a high-pressure environment and you can only function if you work in a unit with your peers," he said. "I realize more and more that going back to a military-like, group-oriented setting is the place for me."

A Commitment to Service

Like Villegas, Castellanos' military career influenced his decision to pursue medicine, though their experiences couldn't be more different.

Castellanos was in boot camp during the Sept. 11, 2001 terror attacks, later training as an aviation ordnance technician responsible for handling and maintaining all weapons systems and ammunition on Marine aircraft. He was sent to Al Asad Airbase three years later.

Then, on one March day, everything changed. Castellanos was originally slated to be on a truck headed to the other side of the base on a resupply mission, but just minutes before taking off, a sergeant told him to stay behind and help guard an ammunition-supply point at their camp, where his roommate had been stationed for the last 12 hours. Castellanos relieved his roommate, who jumped on the truck in his place.

"A few hours later, from the same guard post where he had been all night," Castellanos said, "I watched as the mortars struck our base, killing him."

He declared himself a conscientious objector, Castellanos said, and returned home and enrolled in Claremont McKenna College in California for pre-med. (Although the Marines ultimately denied his conscientious objector claim, Castellanos said, he served the remainder of his military service in non-combatant roles.) Around the same time, he was introduced to Maxine Hong Kingston, a National Book Award-winning author who leads writing and mediation workshops for veterans and their families.

"When I came back from Iraq, I was very lost," Castellanos said. "I didn't understand my experience as a Marine in a war zone; I didn’t understand my experiences as a conscientious objector. I started reading war literature and realized that so many people in previous wars have felt the same way I did. I had to write — I had to continue that long history of American war writing."

Although he knew it would delay his medical education, Castellanos decided to pursue a Masters of Fine Arts in creative writing at the University of Arizona, all the while working part-time in a research laboratory. He enrolled in Weill Cornell’s M.D.-Ph.D. program shortly after earning his MFA.

Castellanos, whose scientific interests focus on immunology and gastrointestinal diseases, has found a strong support system in the medical college's faculty. Their guidance, he said, gives him a sense of encouragement and acceptance that he does not take for granted after enduring the isolation that is all too common among veterans who return from war.

"A lot of people don't understand what it feels like to come back from war. It's so hard for veterans to make it this far," said Castellanos, who was recently diagnosed with PTSD and enrolled in a research study for Iraq and Afghanistan war veterans led by Dr. JoAnn Difede, a Weill Cornell professor of psychology in psychiatry. "Weill Cornell is definitely a veteran-friendly campus. It's a big family here. "The mentoring is phenomenal," he added. "They look after you professionally as well as personally and developmentally. They really want you to succeed. Everybody cares about each other and they care about you as both a person and as a scientist."