Brushing Your Allergies Away

Lacarrubba, 31, got stuffed up around cats, dogs, three kinds of dust mites and several varieties of native New Yorkers — trees, that is. He couldn't sleep. He had trouble going to the gym. And as an attorney, he was too busy to commit to the years-long treatments doctors typically recommend: weekly shots at the doctor's office or holding liquid drops under his tongue for a few minutes every morning. 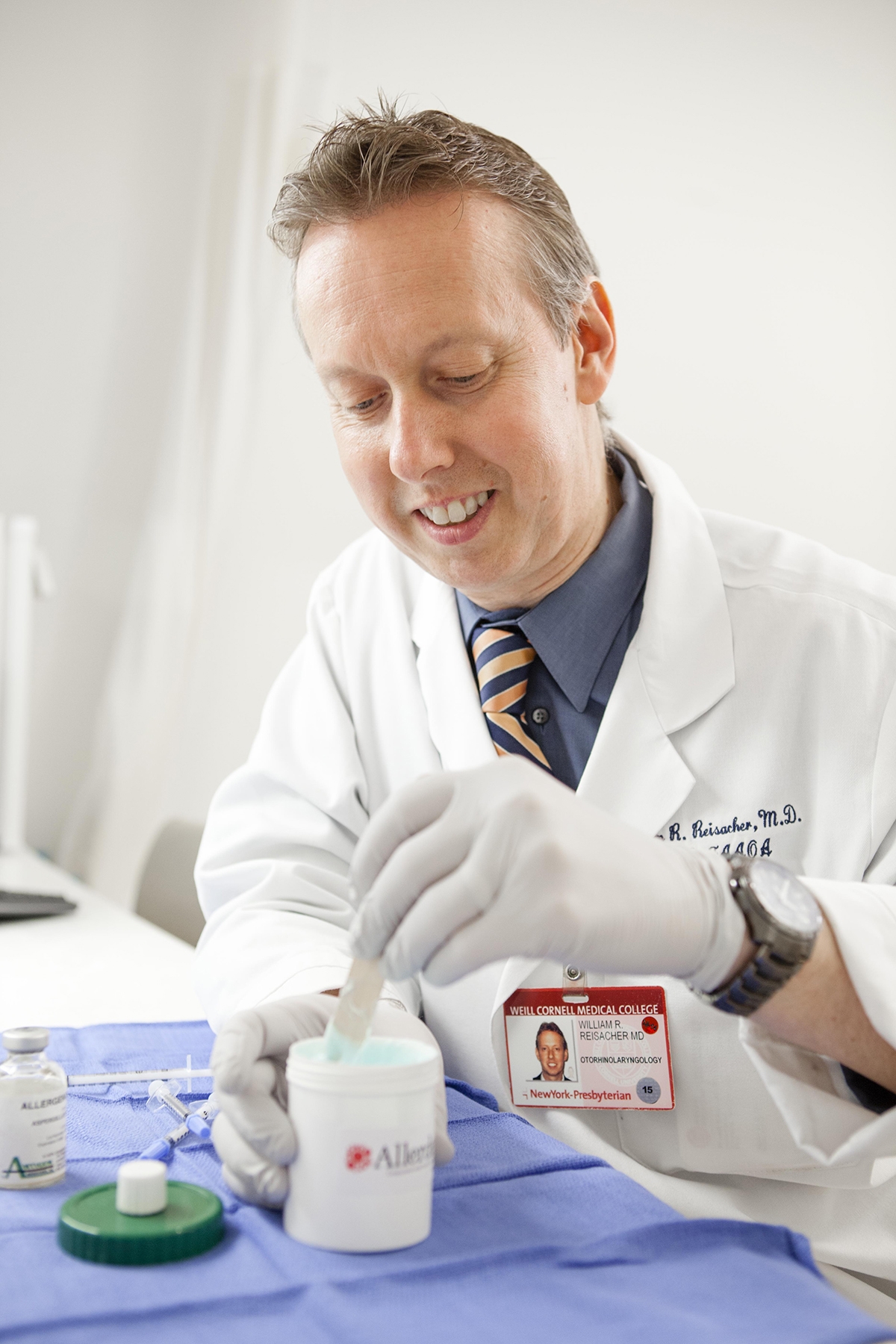 That's when he found Dr. William Reisacher, an ear, nose and throat doctor at Weill Cornell Medical College, who developed an allergy toothpaste to help people like Lacarrubba. The toothpaste, called Allerdent, which Dr. Reisacher is testing in clinical trials, is designed to seamlessly integrate into patients' everyday routines, boosting their immunity to the very airborne substances that cause allergy sufferers to sneeze, cough, wheeze, drip and tear. It contains an extra ingredient other toothpastes lack — extracts of common airborne allergens, among them, trees, grass, dust, mold, cats, dogs, cockroaches and feathers. By exposing patients to these allergens in a controlled way, he hopes they will develop a greater immunity to them and be able to withstand them for longer periods of time.

"The allergy patient is the professional sufferer," said Dr. Reisacher, an associate professor of otolaryngology at Weill Cornell who specializes in allergies and is a co-founder and chief medical officer of Allovate, an early-stage biotechnology company which is commercializing Allerdent. "They are the walking wounded. Unfortunately, many people believe there's nothing they can do about allergies and that's why they don't even go to the doctor. That's such a shame and that's what I want to change. There are things you can do for your allergies and there really isn't a need for suffering. There's something you can do about it."

Dr. Reisacher, who has an equity ownership in Allovate and serves as an unpaid consultant to the company, has been committed to finding that "something" since he started his practice 14 years ago. Doctors have been using immunotherapy to desensitize patients to airborne allergens for a century, but its efficacy in helping the estimated 50 million allergy sufferers in the United States has been limited because it is time consuming, inconvenient and patients sometimes forget to use it, Dr. Reisacher said. And in order to enjoy the full benefits, patients would have to continue the therapy, uninterrupted, for four years.

"Allergy shots are like a college education for your immune system," he said, "and you have to attend all the classes in order to graduate. That was my frame of mind when I asked myself, ‘What can I do to make that problem better?'" 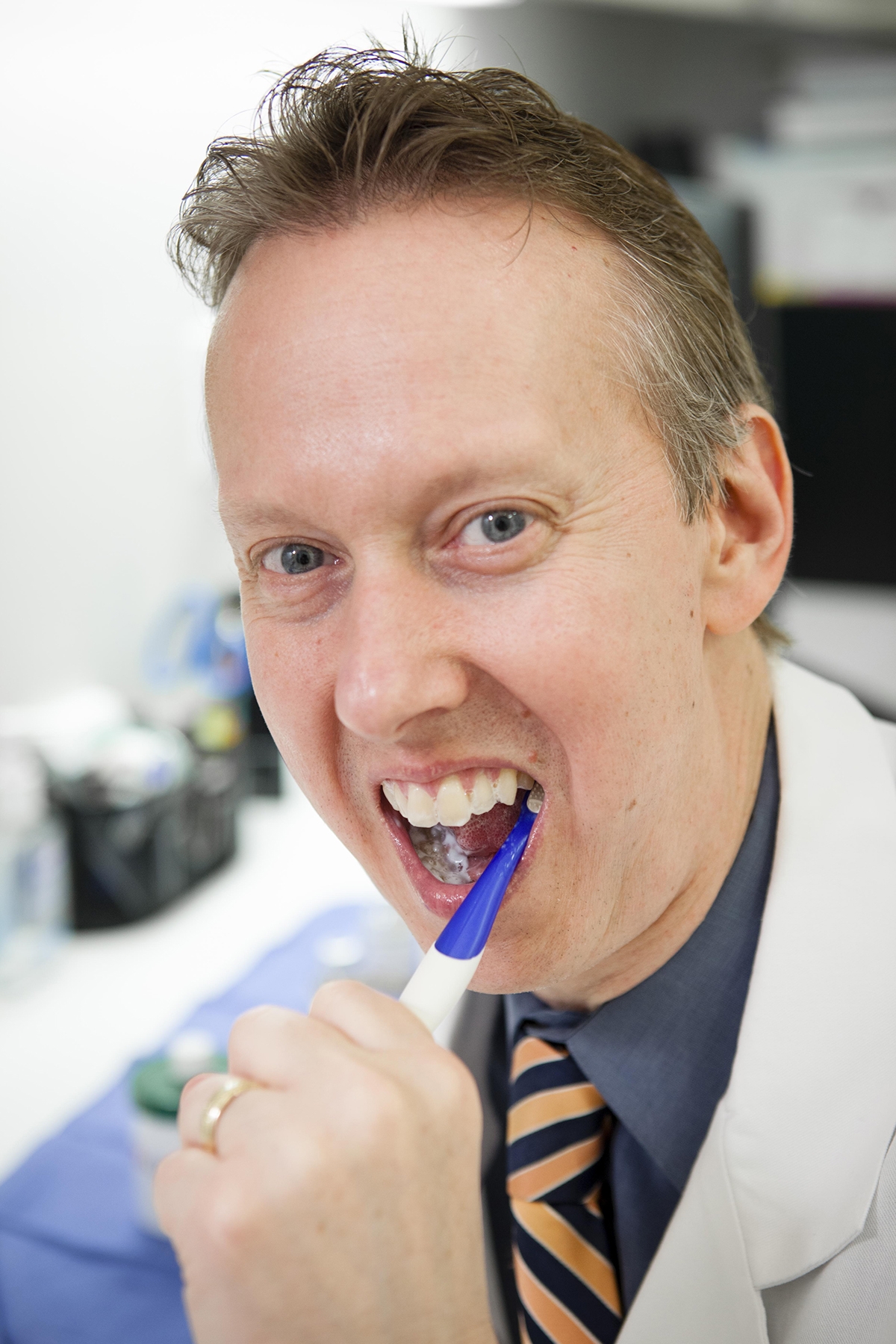 He had scoured the literature and discovered a paper that showed that the immune cells most responsible for desensitization were in the highest density in the gums. Then he had an epiphany.

"I was at home brushing my teeth," he said. "I remember looking into the mirror and thinking, 'All the foamy residue I'm brushing my teeth with is covering the exact areas I want my extracts to go.'

"That ignited an inferno inside my brain," he said. "It was my aha! moment."

He and his business partners formed Allovate in 2012, hired a toothpaste formulation expert to help design the paste and teamed up with a compounding pharmacy to make it on a large scale. Allovate makes the toothpaste's base and has supported Dr. Reisacher's study.

Now, with a grant from the Empire State Development's Division of Science, Technology and Innovation, Dr. Reisacher and Allovate are testing the toothpaste, comparing how adult patients 18 years and older respond to Allerdent in comparison to the liquid drops patients place under the tongue over the course of a year.

If all goes well, Dr. Reisacher hopes to expand patients' access to Allerdent beyond the Tri-State Area, Pennsylvania and Wisconsin, where the toothpaste is currently available by prescription, and eventually seek approval from the U.S. Food and Drug Administration. (Allerdent is currently an "off-label" delivery of FDA-approved extracts.) In the future, Dr. Reisacher plans to investigate whether Allerdent could be used to help people with food allergies, "which is a much tougher nut to crack," he said.

But if Lacarrubba's experience is any indication, Allerdent may be here to stay.

After using the toothpaste for just six months, "my allergies are better than they've ever been," Lacarrubba said. "It's really amazing."