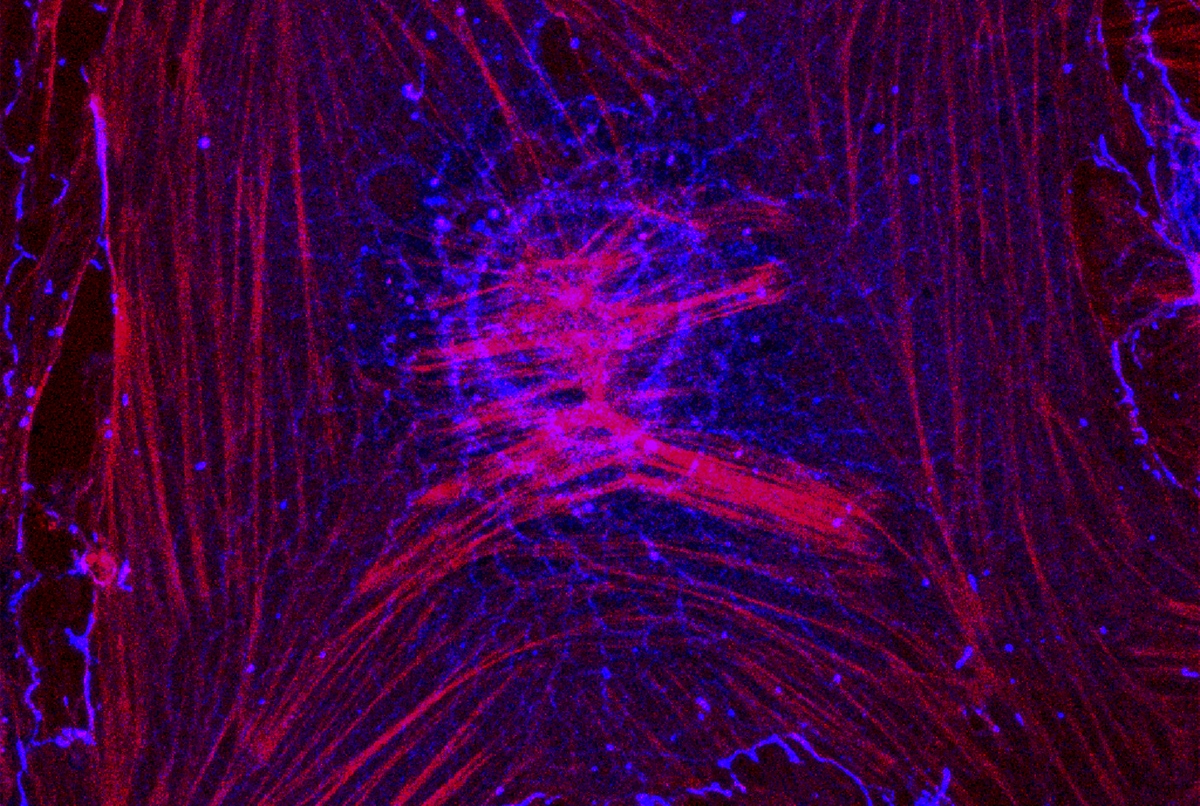 Stress fibers developing in one of the endothelial cells that line cerebral blood vessels. This cell has been exposed to beta-amyloid, a protein fragment involved in Alzheimer's disease.
Image credit: Dr. L. Park

For many years, scientists have known that degeneration of neurons — nerve cells that transmit signals to and from the brain — caused Alzheimer's dementia, an incurable disease afflicting more than 35 million people worldwide and approaching epidemic proportions. Now, a new study from Weill Cornell Medical College reveals that changes occurring in blood vessels also play a major role — by limiting the supply of oxygen and glucose to the brain and contributing to the neuronal damage causing the disease.

Amyloid-beta — a protein fragment that accumulates in the brains of Alzheimer's patients — alters the normal function of neurons and sets the stage for dementia to develop. At the same time, it also acts directly on endothelial cells, the cells lining blood vessels that control the delivery of oxygen and glucose to the brain, thereby damaging their DNA, or genetic makeup, according to the study published Oct. 29 in Nature Communications.

Certain repair processes are put in place to override the damage, including activation of the DNA repair enzyme poly(ADP)-ribose polymerase, which ends up producing large amounts of the chemical ADP-ribose. ADP-ribose, in turn, activates a cellular surface channel — known as transient receptor potential melastatin-2 (TRPM2) — unleashing a flood of calcium ions into the endothelial cells. This sudden and massive calcium overload cripples the endothelial cells and disrupts the supply of blood to the brain, resulting in insufficient delivery of vital oxygen and glucose to the working brain cells.

"The brain blood vessels become unable to supply the oxygen and nutrients needed to fuel the most energy-demanding brain functions, such as learning and memory," says the senior author of the study, Dr. Costantino Iadecola, director of the Feil Family Brain and Mind Research Institute and the Anne Parrish Titzell Professor of Neurology.

The research, conducted in mice, identified a mechanism by which this amyloid-beta peptide impedes the regulation of blood flow to the brain. It also highlighted TRPM2 channels as a potential therapeutic target to counteract cerebrovascular dysfunction in Alzheimer's dementia and related conditions. Drugs are being developed that act on this channel to rescue the dysfunction of endothelial cells, enhance blood-flow delivery to the energy-deprived brain and delay disease progression.

Controlling hypertension, diabetes and obesity — so-called vascular risk factors — also may retard the progression and reduce the risk of Alzheimer's dementia, Dr. Iadecola says. Studies in which patients have been carefully monitored for decades have revealed that people who have these vascular risk factors in their 50s and 60s have an increased risk of developing Alzheimer's later in life.

About half of patients with an Alzheimer's diagnosis also have brain damage resulting from insufficient blood flow, indicating that the blood vessel alterations that contribute to stroke also could accelerate Alzheimer's decline, Dr. Iadecola says. Autopsy studies have confirmed that stroke and Alzheimer's pathologies often coexist in the same brain.

"No one knows why exactly," Dr. Iadecola says. "But most likely, as you get older, especially if vascular risk factors are present, you also tend to have more damage to your blood vessels, which favors accumulation of amyloid beta in the brain. In turn, amyloid beta causes even more damage to blood vessels and further reduces their ability to nourish the brain. It's a vicious cycle that eventually harms brain centers involved in learning and memory and leads to dementia; drugs inhibiting TRPM2 may break this cycle and help reduce the amyloid burden in the brain."