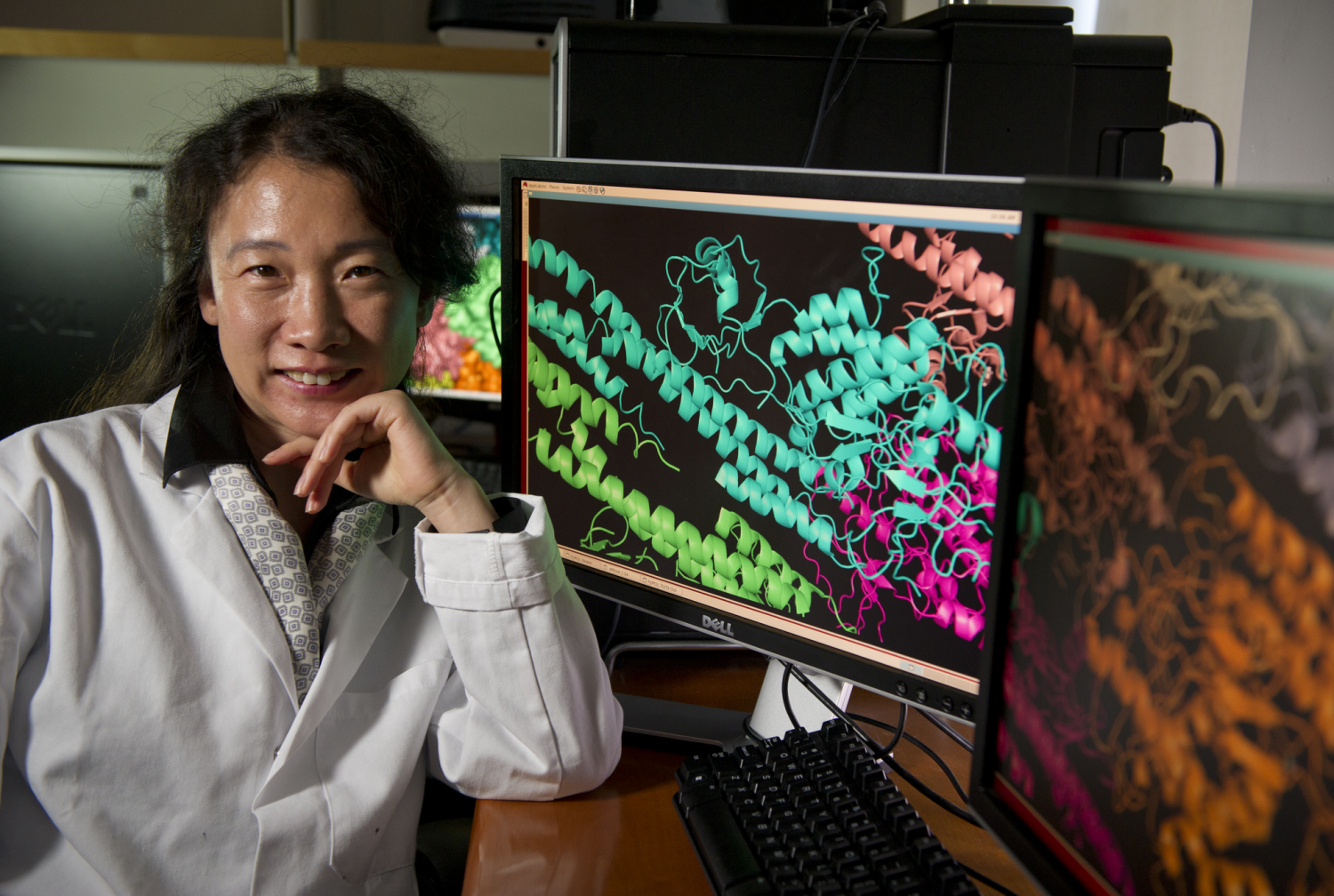 NEW YORK (June 14, 2012) — Researchers at Weill Cornell Medical College have unlocked the structure of a key protein that, when sensing certain viruses and bacteria, triggers the body's immediate immune response.

In the journal Molecular Cell, scientists describe the double wing-like crystal structure of this key protein, known as STING, which is a soldier on the front-line of the body's defense against pathogens. Researchers also show STING in action, displaying evidence of a bacterial infection — an action that launches the body's innate immune response.

"Activation of STING is crucial to the ability of the human body to pick out bits of molecules secreted by pathogens, including many different viruses and bacteria, and alert the human body that they are there. By solving the structure of this protein, we now know how they do this crucial task," says the study's lead author, Dr. Qian Yin, a postdoctoral associate in the laboratory of Dr. Hao Wu, professor of Biochemistry at Weill Cornell Medical College.

"The STING structure provides a remarkable example of the pathogen-host interactions in which a unique microbial molecule directly engages the innate immune system," says Dr. Wu, the study's senior investigator and director of the Lab of Cell Signaling at Weill Cornell.

While the findings have no immediate clinical significance, they might be useful in helping to make vaccines against pathogens more effective. "Based on the structure we have of STING interacting with molecules secreted from bacteria, we may be able to design new molecules that induce a stronger, more persistent immune response," says Dr. Yin.

All plant and animal life use an innate immune response to recognize and respond to an assault by pathogens. This primitive response is immediate, but not long-lasting or protective; the secondary, adaptive immune response sets up the long-term defense.

Previously, scientists thought the innate response was generic, but recently, investigators uncovered proteins expressed by cells of the innate immune system that identify specific molecular patterns linked to microbial pathogens. STING was recently identified as a member of a family of proteins that is involved in this pattern recognition task. It is specifically tasked at finding viruses that have double-stranded DNA genomes, and with locating bacteria.

While STING does not confront viruses or viral molecules directly, with bacteria, STING is on the lookout for small molecules that bacteria use to communicate within their cellular bodies. These molecules are cyclic-di-GMP, produced by most bacteria, and cyclic-di-AMP, used by bacteria that grow inside the cells of a host.

However STING is activated, the end result is the same, Dr. Yin says. STING induces a response from interferon, which activates other immune cells that kill the invading parasites.

Dr. Yin describes STING's structure as two wings, which form the bottom and sides that hold cyclic-di-GMP. "It is like two people holding out their left or right hands, wrists joining and palms facing each other, and holding something in their palms."

The researchers also propose that once STING's wings picks up cyclic-di-GMP, the molecule frees up the tail of STING's protein — which then engages with other proteins.

"We believe this movement of the tail section of the protein is the switch that turns on the interferon response," says Dr. Yin.

"This work has uncovered a number of unexpected insights into how STING works," says Dr. Wu. "By binding tightly only to tiny molecules produced by bacteria, which then turns on the interferon switch, it prevents the immune system from attacking the body's own cells."

Weill Cornell Medical College, Cornell University's medical school located in New York City, is committed to excellence in research, teaching, patient care and the advancement of the art and science of medicine, locally, nationally and globally. Physicians and scientists of Weill Cornell Medical College are engaged in cutting-edge research from bench to bedside, aimed at unlocking mysteries of the human body in health and sickness and toward developing new treatments and prevention strategies. In its commitment to global health and education, Weill Cornell has a strong presence in places such as Qatar, Tanzania, Haiti, Brazil, Austria and Turkey. Through the historic Weill Cornell Medical College in Qatar, Cornell University is the first in the U.S. to offer a M.D. degree overseas. Weill Cornell is the birthplace of many medical advances -- including the development of the Pap test for cervical cancer, the synthesis of penicillin, the first successful embryo-biopsy pregnancy and birth in the U.S., the first clinical trial of gene therapy for Parkinson's disease, and most recently, the world's first successful use of deep brain stimulation to treat a minimally conscious brain-injured patient. Weill Cornell Medical College is affiliated with NewYork-Presbyterian Hospital, where its faculty provides comprehensive patient care at NewYork-Presbyterian Hospital/Weill Cornell Medical Center. The Medical College is also affiliated with the Methodist Hospital in Houston. For more information, visit weill.cornell.edu.