A Conversation with Pervez Musharraf 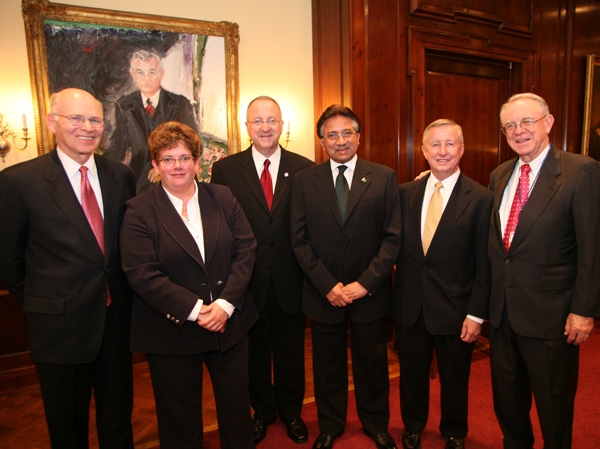 During a visit to Weill Cornell Medical College on Sept. 26, Pakistani President Pervez Musharraf discussed his just-published book and set out to correct some common Western misperceptions about Pakistan's role in the war on terror. Musharraf spoke at Weill Cornell during a weeklong trip to the United States that included stops at the United Nations in New York and the White House in Washington, D.C. 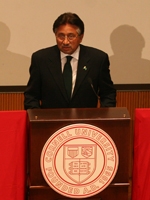 President Musharraf of Pakistan addresses an audience of Cornell and Weill Cornell students, faculty and staff on Sept. 26.

Musharraf was hosted by Cornell University President David Skorton, who called him "one of the world's most important voices," and by Weill Cornell Dean Antonio Gotto Jr.

Musharraf spent most of his talk recounting the history and current state of the Pakistani-U.S. alliance, as well as describing the global war on terror in Pakistan's lawless rural countryside, where he insisted "Talibanization" must be countered with an equally strong, anti-extremist message. 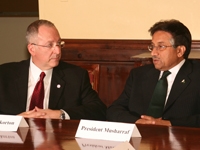 Cornell University President Dr. David Skorton and President Musharraf in a private meeting prior to the presentation in Uris Auditorium.

Musharraf characterized Pakistan as the United States' strongest ally on the Indian sub-continent during the Cold War, a relationship he admitted has oscillated somewhat in recent years but one that has remained strong.

During his visit, Musharraf also met with leaders of Cornell University, including Dr. Skorton, his wife, Professor Robin Davisson, Provost Biddy Martin, and chairman of the Cornell Board of Trustees Peter Meinig, as well as leaders of Weill Cornell including Dean Gotto to discuss potential partnerships.

"I am trying to ensure that a functional and sustainable democracy will exist in Pakistan," Musharraf said. "We act as a bridge with the Islamic world, but our orientation is Western."

President Skorton welcomed President Musharraf's request for advice as Pakistan builds for the future. "Cornell as a whole stands ready to help further education, both in Pakistan and around the world," Dr. Skorton said.

During the meeting, Dean Gotto explained that Weill Cornell has already taken a leadership role in education in the Muslim world with the establishment of Weill Cornell Medical College in Qatar.

"Our students in Qatar," Dr. Gotto said, "have grades that are indistinguishable from students in the U.S. Their performance shows you can implement an American curriculum in another country." 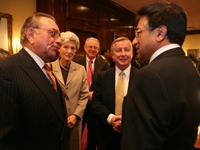 President Musharraf praised Weill Cornell's global initiatives, saying that higher education is an evolving goal for Pakistan. During a question-and-answer session with invited guests at Uris Auditorium, Wasif Syed, a graduate student in applied and engineering physics in Ithaca and one of two students that helped bring Musharraf to Cornell, asked the Pakistani president about his vision for higher education in Pakistan.

"We are following a vision, expanding Ph.D. programs and opening nine universities now all over Pakistan. These are universities which are meant to create talent in engineering, science and technology," Musharraf said. "Already there is a reverse brain drain because of the opportunities. Already Ph.D.s from the United States are returning and teaching in the universities in Pakistan and raising the levels of the university. And we are going to follow this path and there will be more opportunities."