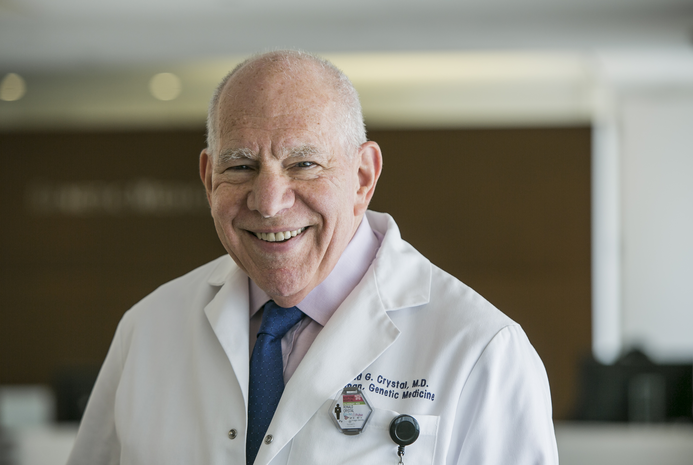 Dr. Ronald Crystal, chairman of the Department of Genetic Medicine and the Bruce Webster Professor of Internal Medicine at Weill Cornell Medicine, has been elected a fellow of the National Academy of Inventors (NAI).

The NAI Fellows Program is the highest distinction honoring academic inventors for creating outstanding innovations that have made a measurable impact on quality of life, economic development and the welfare of society.

Dr. Crystal is recognized for his pioneering contributions in the field of gene therapy. He was the first scientist to use a modified cold virus, an adenovirus, as a vehicle for delivering new therapies in animal models—an innovation that became the foundational construct for many gene therapy strategies as well as vaccines, including Johnson & Johnson Janssen’s COVID-19 vaccine. He is the inventor of 30 patents and 12 pending applications in the United States plus numerous foreign patents and applications.

“I’m honored to be nominated by my peers and recognized by the NAI as a gene therapy pioneer,” said Dr. Crystal, who is also a professor of genetic medicine. “It’s rewarding to help people as a physician, but it’s another level altogether to conduct scientific research and translate learning to approved therapies that help many.”

“Advancing technologies such as those developed by Dr. Crystal is a major emphasis of the Weill Cornell Medicine Enterprise Innovation team as we work to support our inventors in positively impacting patients and society,” said Dr. Lisa Placanica, senior managing director for Enterprise Innovation and the Center for Technology Licensing at Weill Cornell Medicine. “We congratulate Dr. Crystal on this recognition of his accomplishments.”

Before joining Weill Cornell Medicine in 1993 as the chief of the Division of Pulmonary and Critical Care Medicine, Dr. Crystal was chief of the Pulmonary Branch at the National Heart, Lung, and Blood Institute, where he and his colleagues developed a therapy for a hereditary disorder associated with early-onset emphysema, called alpha-1 antitrypsin (AAT) deficiency. More than 6,000 patients globally have received the FDA-approved treatment.

Dr. Crystal has founded four biotech companies, including GenVec, one of the first gene therapy companies to advance the development of gene therapies for inherited conditions with no treatment options. Most recently, he founded LEXEO Therapeutics, which is currently conducting clinical trials of novel treatments for Alzheimer’s disease with the genetic variant apolipoprotein E4 (APOE4) and the movement disorder CLN2 Batten disease.

“One of my greatest career decisions was to come to Weill Cornell Medicine and have the opportunity to work with experts in so many fields,” Dr. Crystal said. “I’m grateful to the colleagues and students who have played a major role in my successes over the years. I also find it satisfying to train young scientists and see them make a difference with their inventions.”

Dr. Xingen Lei, a professor of animal science at Cornell University, was also named an NAI fellow, in recognition of his innovative work on livestock nutrition. Drs. Crystal and Lei will be officially inducted at the NAI annual meeting in June 2022.