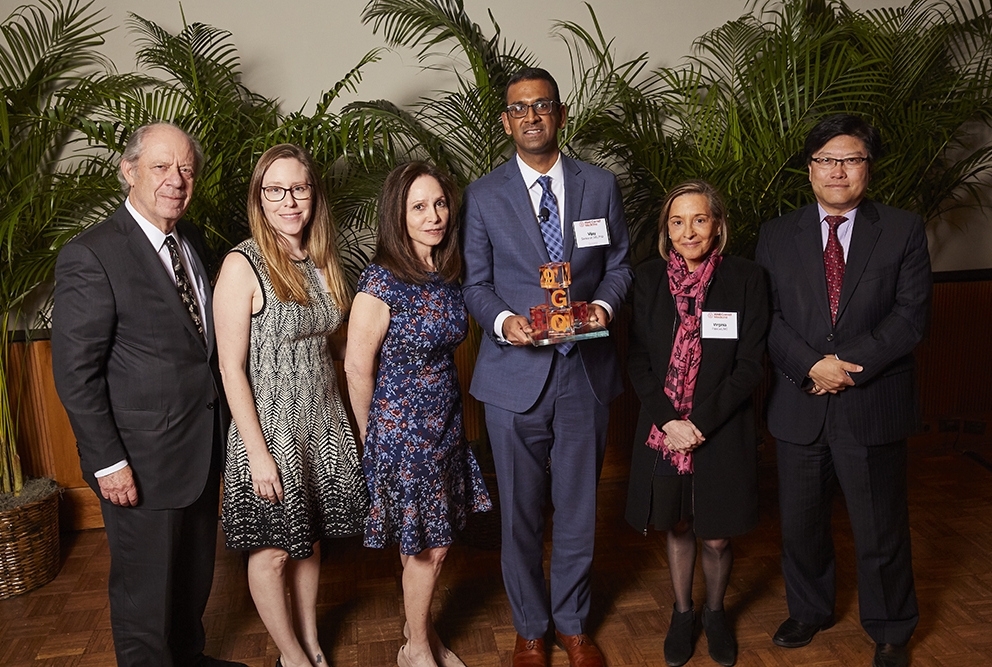 The Drukier Prize honors an early-career pediatrician whose research has made important contributions toward improving the health of children and adolescents. Dr. Sankaran is a pediatric hematologist and oncologist at Dana-Farber/Boston Children’s Cancer and Blood Disorders Center, and an assistant professor of pediatrics at Harvard Medical School. He is being recognized for his innovative research on red blood cell disorders, using genetic studies to understand how blood cell production occurs normally and how it goes awry in disease. His findings have led to promising new therapeutic approaches for these disorders.

“Dr. Sankaran is a talented physician-scientist whose steadfast commitment to pediatric research and clinical care exemplifies the spirit of our Gale and Ira Drukier Prize in Children’s Health Research,” said Dr. Augustine M.K. Choi, the Stephen and Suzanne Weiss Dean of Weill Cornell Medicine. “His research on the causes of genetic blood disorders and his work to translate those findings into new treatments have provided hope to children suffering from these diseases and their families. We’re delighted to honor him with this year’s Drukier Prize.”

“We are thrilled to be honoring Dr. Sankaran with this award,” said Dr. Gale Drukier and Weill Cornell Medicine Overseer Ira Drukier, who together in 2014 established the prize. “Dr. Sankaran’s innovative research and commitment to improving the health and lives of children are truly inspiring. It brings us tremendous joy to recognize those in the scientific community, like him, who are making a real impact in pediatric research and to shine a spotlight on their vital work.”

Dr. Sankaran’s research focuses on inherited diseases, such as sickle cell disease and thalassemia, that affect molecules called hemoglobin, which are present in all red blood cells and are responsible for transporting oxygen throughout the body. Humans produce two forms of hemoglobin in their lifespans: a fetal version when they are in the womb and an adult version after birth. Patients with sickle cell disease and thalassemia produce either misshapen or too few adult hemoglobin. Scientists have found that by inducing the switch back to fetal hemoglobin they can ameliorate the severity of these diseases.

Dr. Sankaran identified a key regulator of the switch, a molecule called BCL11A, which when suppressed allows fetal hemoglobin levels to increase. Dr. Sankaran and colleagues are now developing gene therapy methods to reduce the levels of BCL11A in patients’ blood stem cells, which are then reintroduced into their bodies to populate their blood with cells that can produce more fetal hemoglobin.

Dr. Sankaran’s research contributions also extend to other rare genetic blood disorders, including Diamond-Blackfan anemia, in which the bone marrow fails to produce enough red blood cells. Many patients with the disorder, which affects seven per 1 million people worldwide, have mutations that disrupt ribosomes, the cell’s general protein-making machine, leaving scientists puzzled as to why that defect causes the disease. But Dr. Sankaran discovered that a small percentage of patients with the disease have mutations in a gene called GATA1, which is a master regulator of blood production. The more common defect in ribosomes, he found, was causing Diamond-Blackfan anemia by disrupting production of GATA1. Those findings underscored that raising levels of GATA1 in cells may be an effective new treatment for Diamond-Blackfan anemia, which Dr. Sankaran is pursuing using gene therapy and small molecule approaches.

“I’m incredibly humbled to be getting this award,” Dr. Sankaran said. “In addition to honoring the work that we’ve done in the lab, and the great mentorship I’ve received, I’m extremely grateful that this award is given for child health research. With increased support, there are tremendous opportunities for us to advance the work being done in this area so that we can protect the health of future generations.”

The Gale and Ira Drukier Prize in Children’s Health Research was established in 2014 as part of a $25 million gift to Weill Cornell Medicine. The gift also created the Drukier Institute for Children’s Health, a premiere, inter-disciplinary institute dedicated to understanding the underlying causes of diseases that are devastating to children. As part of its mission, the institute awards the prize, which carries a $10,000 unrestricted honorarium, annually to recognize the innovative work done by young investigators in pediatric research.

“Studying genetics is essential when focusing on childhood diseases, as so many of them have a hereditary component,” said Dr. Virginia Pascual, the Drukier Director of the Gale and Ira Drukier Institute for Children’s Health. “Dr. Sankaran’s research has illuminated some of the causes – and potential treatments – of genetic blood disorders. His dedication to treating children exemplifies why this institute and award were created and why we’re so pleased to be honoring him.”

Dr. Sankaran received a Bachelor of Arts and a Master of Science in biochemistry from the University of Pennsylvania in 2002. He went on to earn a Master of Philosophy in biochemistry from the University of Cambridge in 2003, and a doctorate in genetics in 2009 and a medical degree in 2010, both from Harvard Medical School. For his postdoctoral training, Dr. Sankaran completed a research fellowship in molecular hematology, as well as an internship and residency in pediatrics, at Boston Children’s Hospital. He also completed a clinical fellowship in pediatric hematology and oncology at the Dana-Farber Cancer Institute and Boston Children’s Hospital, where he has served as an attending physician since 2015. He is an associate member of the Broad Institute of MIT and Harvard, and has been on faculty at Harvard Medical School since 2014.