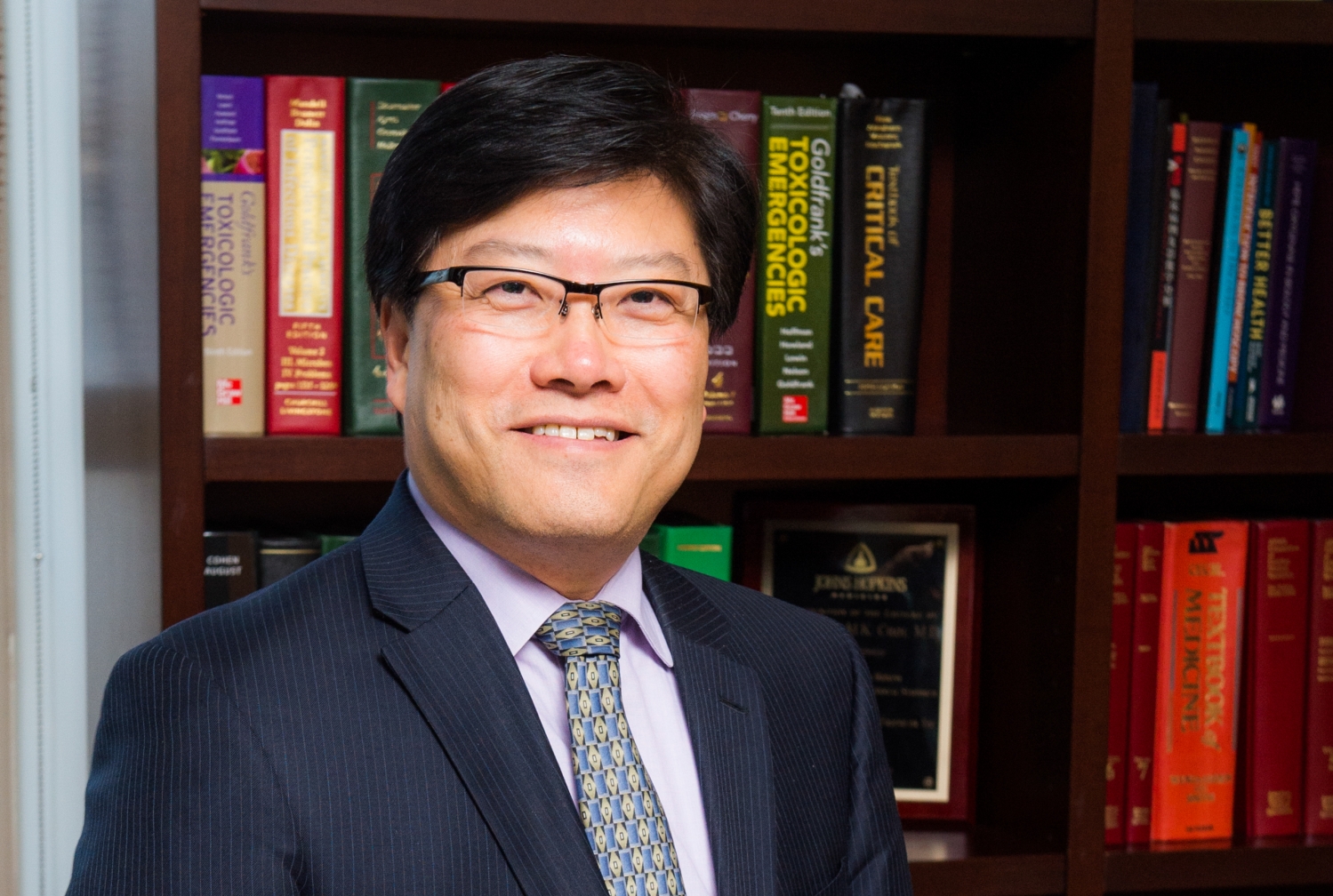 Choi leads a rapidly growing institution, which includes a physician organization that is expanding throughout New York City, thriving programs in biomedical discovery and clinical and translational research, and top-ranked medical and graduate schools. Based on his experience as a clinician, researcher, entrepreneur and mentor, he plans to advance diverse initiatives across Weill Cornell Medicine’s mission of improving human health.

Among his main priorities as dean will be expanding clinical services into Lower Manhattan, Queens and Brooklyn with hospital partner NewYork-Presbyterian. In the context of a shifting and complex health care environment, Weill Cornell Medicine will take a proactive approach to reach new patients and increase its cohort of clinical faculty, which currently numbers more than 1,200 physicians.

Another key area of focus will be joint research, academic collaborations and entrepreneurial partnerships across all of Cornell’s campuses that will pool intellectual resources across faculty with complementary interests and bolster efforts to recruit and retain the best scholars, trainees and students.

“I send my warmest congratulations to Dr. Augustine Choi on his appointment as dean,” said Martha E. Pollack, who will become Cornell’s 14th president April 17. “I am deeply impressed by his intellect, his candor, and his obvious passion for advancing Weill Cornell Medicine’s mission in patient care, discovery and education. I look forward to furthering collaborations across campuses and to working jointly with him to enhance the university’s strengths in the life sciences.”

“Throughout the extensive national search to find the most highly qualified candidates to lead Weill Cornell Medicine, Augustine kept rising to the top,” said Hunter R. Rawlings III, Cornell’s interim president and co-chair of the search committee that selected Choi. “As interim dean, he has already engaged multiple constituencies – among Weill Cornell’s faculty and leadership, across Cornell’s campuses, at NewYork-Presbyterian and partner institutions, and throughout Cornell’s broad network of supporters and friends. I found him to be a consummate leader as interim dean, and I am excited that he will be guiding Weill Cornell Medicine during the next chapter of its illustrious history.”

“It has been an honor and a privilege to serve Weill Cornell Medicine as interim dean for the past seven months,” said Choi, “and being selected as dean is both an incredibly humbling and a joyful experience. I am ready to intensify my efforts on behalf of our students, trainees, faculty and staff and to guide Weill Cornell Medicine into the future as it strives to attain new levels of excellence. I am certain that, working together, we are a triple threat and can make lasting and impactful contributions in health care, scientific discovery and education.”

“I could not be more delighted for Dr. Choi or for Weill Cornell Medicine,” said Bibliowicz. “He is absolutely the best person to propel this institution forward and maintain its trajectory of extraordinary growth. He can guide our research and academic mission based on his extensive experience as a physician, scientific investigator and entrepreneur. He is a proven executive leader proficient at negotiating the clinical challenges confronting academic medical centers, and he is firmly committed to the importance of mentorship at all levels.”

“With Dr. Choi, we have found the ideal dean for Weill Cornell Medicine,” said Robert S. Harrison, chairman of the board of trustees. “On behalf of the board, I would like to thank the members of the search committee who dedicated much time and effort to conducting a listening tour with key stakeholders and ultimately identifying Augustine as our top choice. He has all the qualities we seek for this demanding position – strong academic credentials in research and teaching, an extensive background in delivering clinical care and exceptional leadership skills. I am particularly impressed by his commitment to transparency, inclusiveness and collaboration among the various Cornell campuses.”

“Dr. Choi is uniquely and perfectly placed to lead Weill Cornell Medicine further into the 21st century,” said Sanford I. Weill, chairman emeritus of the Weill Cornell Medicine Board of Overseers. “As department chair, he has amply demonstrated his prowess in growing clinical and sponsored research revenues, recruiting world-class scientific leaders and nurturing extremely talented individuals. He has a firm grasp of the issues facing Weill Cornell Medicine, he is a product of an institution that can promote from within, and he will hit the ground running.”

A distinguished investigator with a strong history of support from the National Institutes of Health, Choi has focused his research career on understanding how diseases of the lung, such as chronic obstructive pulmonary disease and acute respiratory distress syndrome, develop in response to molecular, cellular and genetic triggers. Choi currently directs three clinical trials funded by the National Institutes of Health and the U.S. Food and Drug Administration that are examining whether inhaled carbon monoxide can be an effective therapy in diseases such as pulmonary fibrosis, sepsis-induced acute respiratory distress syndrome, and pulmonary hypertension.

An innovator in all aspects of the academic mission, Choi has received numerous honors and awards, including the Johns Hopkins Physician Scientist Award; the 2010 American Thoracic Society Recognition Award for Scientific Accomplishment; the 2015 J. Burns Amberson Lecture, which recognizes a career of major lifetime contributions to pulmonary research; and the 2011 Ho-Am Prize in Medicine, which is awarded for outstanding contributions to the development of science and medicine and is often referred to as the Korean Nobel Prize.

Dr. Choi is married to Dr. Mary E. Choi, associate professor of medicine in the division of nephrology and hypertension at Weill Cornell Medicine. She is a physician-scientist and a nephrologist who is leading investigations into the role of autophagy in diseases of the kidney. They have two sons: Justin, who is completing an internal medicine residency at the Yale School of Medicine, and Alex, who is a medical student at the University of Michigan Medical School.

Dr. Choi has a longstanding commitment to the training of postdoctoral fellows and physician-scientists in lung diseases. An internationally recognized expert in the field, his research interests focus on the regulation and function of stress response genes in response to oxidative stress. His laboratory has contributed much to our understanding of the molecular regulation and function of heme oxygenase-1 and gaseous molecule carbon monoxide in lung disease, and it has studied this cytoprotective system in a variety of in vitro and in vivo models of lung and vascular disease. Dr. Choi’s research has advanced the study of carbon monoxide from basic biochemistry to novel potential therapies for multiple lung and non-pulmonary diseases, and he is currently examining whether inhaled carbon monoxide can be an effective therapy in humans. He is also interested in genomic approaches to identify candidate genes important in the pathogenesis of lung diseases, in particular sepsis/acute respiratory distress syndrome and emphysema. His laboratory has recently focused on the role of autophagy, a normal physiological process of intracellular degradation, in acute and chronic lung diseases. While at Harvard, Dr. Choi launched his own company devoted to improving the treatment of patients with lung disease.

Dr. Choi has published more than 300 peer-reviewed articles in publications such as Nature Immunology, Nature Medicine, New England Journal of Medicine, and Proceedings of the National Academy of Sciences, as well as numerous book chapters and editorials. He is a member of the American Society of Clinical Investigation and the Association of American Physicians. Dr. Choi is currently funded by multiple NIH R01 grants, has two program project grants, and is directing three clinical trials of experimental therapies.

With more than 25 years of experience as an academic medical center faculty member and administrator, Dr. Choi demonstrated exceptional leadership as chair of the Joan and Sanford I. Weill Department of Medicine, which comprises 16 divisions and more than 1,700 full-time and voluntary faculty. Under his leadership, the department underwent extraordinary growth, with its number of full-time faculty increasing by more than 50 percent. Dr. Choi drove major advances in the scope and strength of the department, raising its stature and reputation among peer institutions and patient communities. He spearheaded the recruitment of top-tier academic leaders in both clinical care and research, including senior recruits for gasteroenterology and hepatology, general internal medicine, cardiovascular medicine, and pulmonary and critical care medicine. He developed and expanded programs for students, trainees and early-career faculty, including clerkship experiences, research opportunities, and mentoring support. Enhanced grant application support and faculty recruitment led to a significant increase in sponsored research funding for the department, while clinical revenues increased through geographic expansion to population centers off-campus, a greater number of clinical faculty, and operating efficiencies.