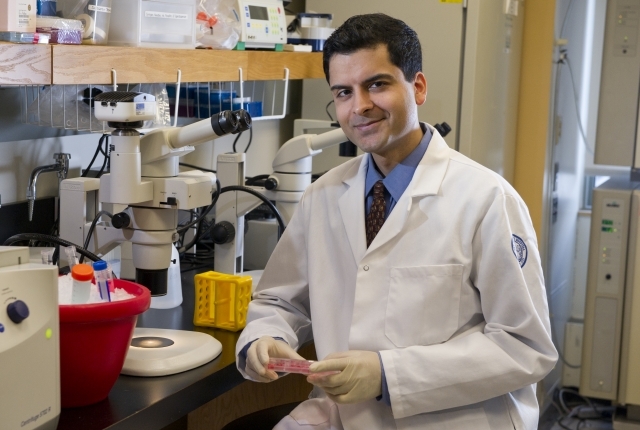 NEW YORK and SAN FRANCISCO—December 2, 2014—Researchers from Weill Cornell Medical College and the Gladstone Institutes have found a way to prevent noise-induced hearing loss in a mouse using a simple chemical compound that is a precursor to vitamin B3. This discovery has important implications not only for preventing hearing loss, but also potentially for treating some aging-related conditions that are linked to the same protein.

Published today in Cell Metabolism, the researchers used the chemical nicotinamide riboside (NR) to protect the nerves that innervate the cochlea. The cochlea transmits sound information through these nerves to the spiral ganglion, which then passes along those messages to the brain. Exposure to loud noises damages the synapses connecting the nerves and the hair cells in the cochlea, resulting in noise-induced hearing loss.

The researchers set about trying to prevent this nerve damage by giving mice NR before or after exposing them to loud noises. NR was successful at preventing damage to the synaptic connections, avoiding both short-term and long-term hearing loss. What’s more, NR was equally effective regardless of whether it was given before or after the noise exposure.

"One of the major limitations in managing disorders of the inner ear, including hearing loss, is there are a very limited number of treatments options. This discovery identifies a unique pathway and a potential drug therapy to treat noise-induced hearing loss," says Dr. Kevin Brown, an associate professor of otolaryngology-head and neck surgery at the University of North Carolina School of Medicine and first author on the paper. Dr. Brown conducted the research while at Weill Cornell.

The researchers chose NR because it is a precursor to the chemical compound nicotinamide adenine dinucleotide (NAD+), which had previously been shown by Dr. Brown and co-senior author Dr. Samie Jaffrey to protect cochlea nerve cells from injury. However, NAD+ is an unstable compound, calling into question whether it could be used out of the petri dish and in a live animal. That led the scientists to use NR instead.

Methods for synthesizing NR were recently developed by Dr. Anthony Sauve, a professor of pharmacology at Weill Cornell and co-author of the study. This resulted in quantities of NR that were sufficient to test in animals.

"NR gets into cells very readily and can be absorbed when you take it orally. It has all the properties that you would expect in a medicine that could be administered to people,” said Dr. Jaffrey, a professor of pharmacology at Weill Cornell.

Beyond just preventing hearing loss, the researchers think the results may have broader applications because of the underlying way NR protects nerve cells. The scientists showed that NR and NAD+ prevent hearing loss by increasing the activity of the protein sirtuin 3 (SIRT3), which is critically involved in the function of mitochondria, the powerhouses of the cell.

The researchers hypothesized that it was this enhancement of SIRT3 that was behind the protective properties of NR. To test this, they manipulated SIRT3 levels independently of NR to see if they could still prevent noise-induced hearing loss by administering NR. Sure enough, deleting the SIRT3 gene in mice abolished any of the protective properties of NR. The researchers also showed that a new strain of mice, generated in the lab of co-senior author Dr. Eric Verdin at the Gladstone Institutes and engineered to express high levels of SIRT3, were inherently resistant to noise-induced hearing loss, even without administration of NR.

SIRT3 decreases naturally as we age, which could partially explain aging-related hearing loss. Additionally, some individuals carry different versions of the SIRT3 genes that result in reduced enzyme activity, which may make them more susceptible to noise-induced hearing loss.

Dr. Verdin, an investigator at the Gladstone Institute of Virology and Immunology and professor of medicine at the University of California, San Francisco, says, "The success of this study suggests that targeting SIRT3 using NR could be a viable target for treating all sorts of aging-related disorders—not only hearing loss but also metabolic syndromes like obesity, pulmonary hypertension, and even diabetes."

About the Gladstone Institutes

To ensure our work does the greatest good, the Gladstone Institutes focus on conditions with profound medical, economic, and social impact—unsolved diseases of the brain, the heart, and the immune system. Affiliated with the University of California, San Francisco, Gladstone is an independent, nonprofit life science research organization that uses visionary science and technology to overcome disease.