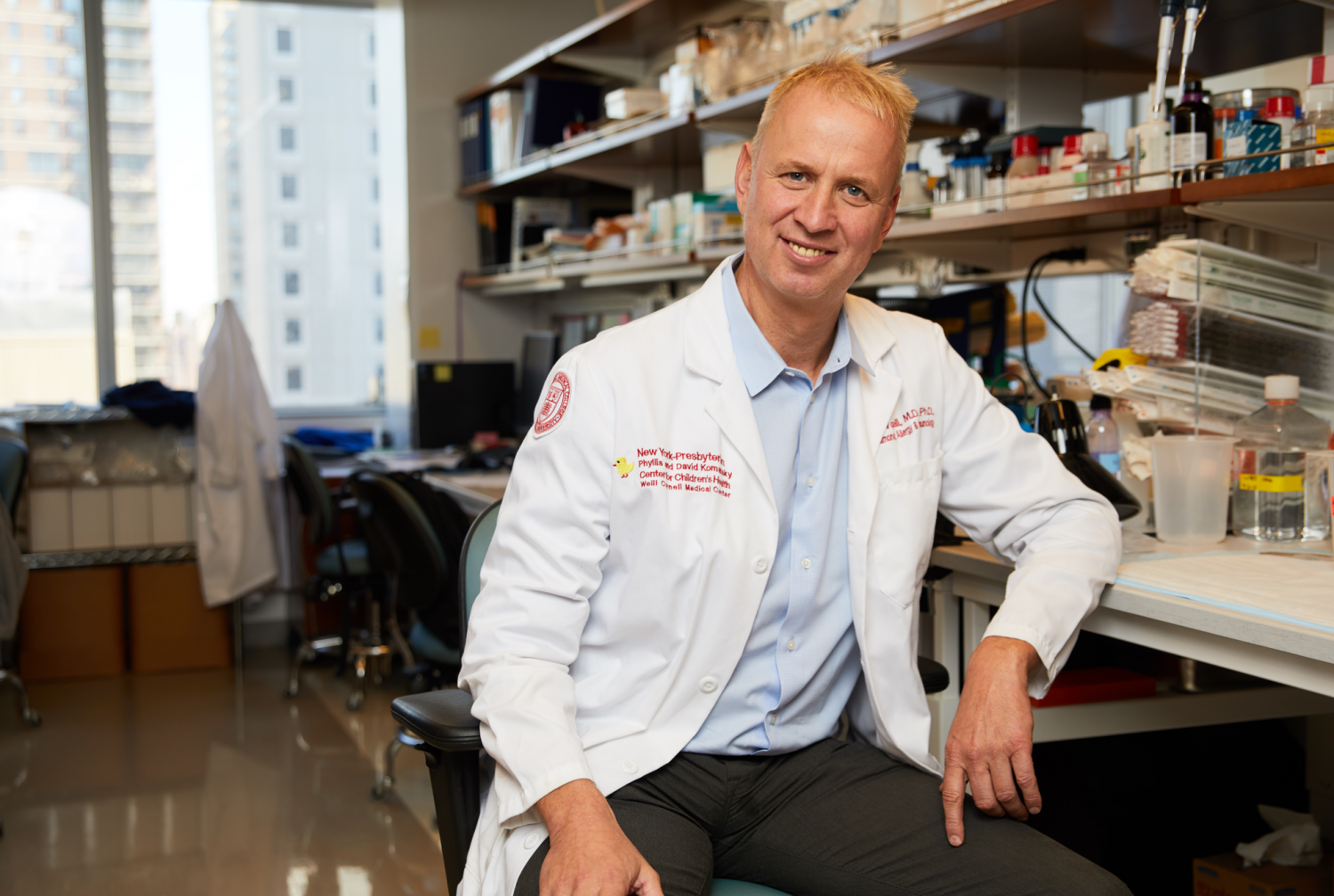 NEW YORK (May 22, 2013) — Little is known about why asthma develops, how it constricts the airway or why response to treatments varies between patients. Now, a team of researchers at Weill Cornell Medical College, Columbia University Medical Center and SUNY Downstate Medical Center has revealed the roots of a common type of childhood asthma, showing that it is very different from other asthma cases.

Their report, in Science Translational Medicine, reveals that an over-active gene linked in 20 to 30 percent of patients with childhood asthma interrupts the synthesis of lipid molecules (known as sphingolipids) that are part of cell membranes found all over the body.

Although the researchers do not yet understand why asthma results from reduced production of sphingolipids, their experiments clearly show a link between loss of these lipids and bronchial hyperreactivity, a key feature of asthma.

What makes this pathway unique, investigators say, is that it is not related to allergens and, the investigators discovered, has nothing to do with inflammation.

"Usually asthma is thought to be an inflammatory disease or a reaction to an allergen. Our model shows that asthma can result from having too little of a type of sphingolipids. This is a completely new pathway for asthma pathogenesis," says the study's senior author, Dr. Stefan Worgall, chief of the Pediatric Pulmonology, Allergy and Immunology Division at NewYork-Presbyterian Hospital/Weill Cornell Medical Center.

This is very good news, he adds. "Our findings are not only valuable in understanding the pathogenesis of this complex disease, but provide a basis to develop novel therapies, especially asthma agents based on a patient's genotype," says Dr. Worgall, who is also a distinguished professor of pediatric pulmonology, professor of pediatrics and associate professor of genetic medicine at Weill Cornell Medical College.

Asthma is a significant health problem affecting about 7 million children in the United States. Nearly 10 percent of American children 0-17 years of age have asthma, making it the most common serious respiratory childhood disease. Its prevalence is even higher among inner-city children, says Dr. Worgall. Besides causing suffering, disability and alarm, the economic toll is significant, he says: In 2009, asthma caused 640,000 emergency room visits and 157,000 hospitalizations, plus 10.5 million missed school days.

"Yet while it has become increasingly evident that asthma takes several forms, treatment of the disorder is uniform," he says. "Most therapies are designed to reduce inflammation, but they do not help all sufferers."

The notion that asthma has different forms gained ground after several genome-wide association studies (GWAS) found variation in a gene, later identified as ORMDL3, in to up to 30 percent of asthma cases. In 2007, over-production of the gene's protein was connected to childhood asthma, and this gene has been the most consistent genetic factor identified so far for asthma.

In 2010, a study in yeast found that ORMDL3 protein inhibits sphingolipid de-novo synthesis.

This finding prompted the researchers to investigate whether sphingolipid production is connected to asthma. Their study shows that this is indeed true in mouse models of the disease. Using mouse models, the researchers found that inhibition of an enzyme, serine palmitoyl-CoA transferase (SPT), which is critical to sphingolipid synthesis, produced asthma in mice and in human airways, as it did in mice that had a genetic defect in SPT.

The airway hyperactivity seen in the mice was not linked to increased inflammation, and the scientists saw a decreased response of the lung and airways to magnesium — which is often used in emergency rooms to relieve chest tightness of patients with asthma attacks.

"In our mouse models, we found that magnesium was not effective at inducing airway relaxation, suggesting the same would be true for humans whose asthma is linked to ORMDL3," says the study's first author, Dr. Tilla S. Worgall, assistant professor in the Department of Pathology and Cell Biology and a member of the Institute of Human Nutrition at Columbia University Medical Center. "The association of decreased de novo sphingolipid synthesis with alterations in cellular magnesium homeostasis provides a clue into the mechanism of asthma. Therefore, therapies that circumvent the effect of the ORMDL3 genotype may be effective treatments for asthma sufferers. We are now working towards developing these new therapies."

The study was funded by the Department of Pediatrics at Weill Cornell Medical College, and the Department of Pathology and Cell Biology and Institute of Human Nutrition at Columbia University Medical Center. This research was also supported by the Irving Institute for Clinical and Translational Research at CUMC, which is supported by the National Institutes of Health (NIH) Clinical and Translational Science Award (CTSA) program, through grant UL1 TR000040.

The authors declare no financial or other conflicts of interest.

Columbia University Medical Center provides international leadership in basic, preclinical, and clinical research; medical and health sciences education; and patient care. The medical center trains future leaders and includes the dedicated work of many physicians, scientists, public health professionals, dentists, and nurses at the College of Physicians and Surgeons, the Mailman School of Public Health, the College of Dental Medicine, the School of Nursing, the biomedical departments of the Graduate School of Arts and Sciences, and allied research centers and institutions. Columbia University Medical Center is home to the largest medical research enterprise in New York City and State and one of the largest faculty medical practices in the Northeast. For more information, visit cumc.columbia.edu or columbiadoctors.org.