Sanford I. Weill and Dr. Joseph J. Fins Elected to American Academy of Arts and Sciences 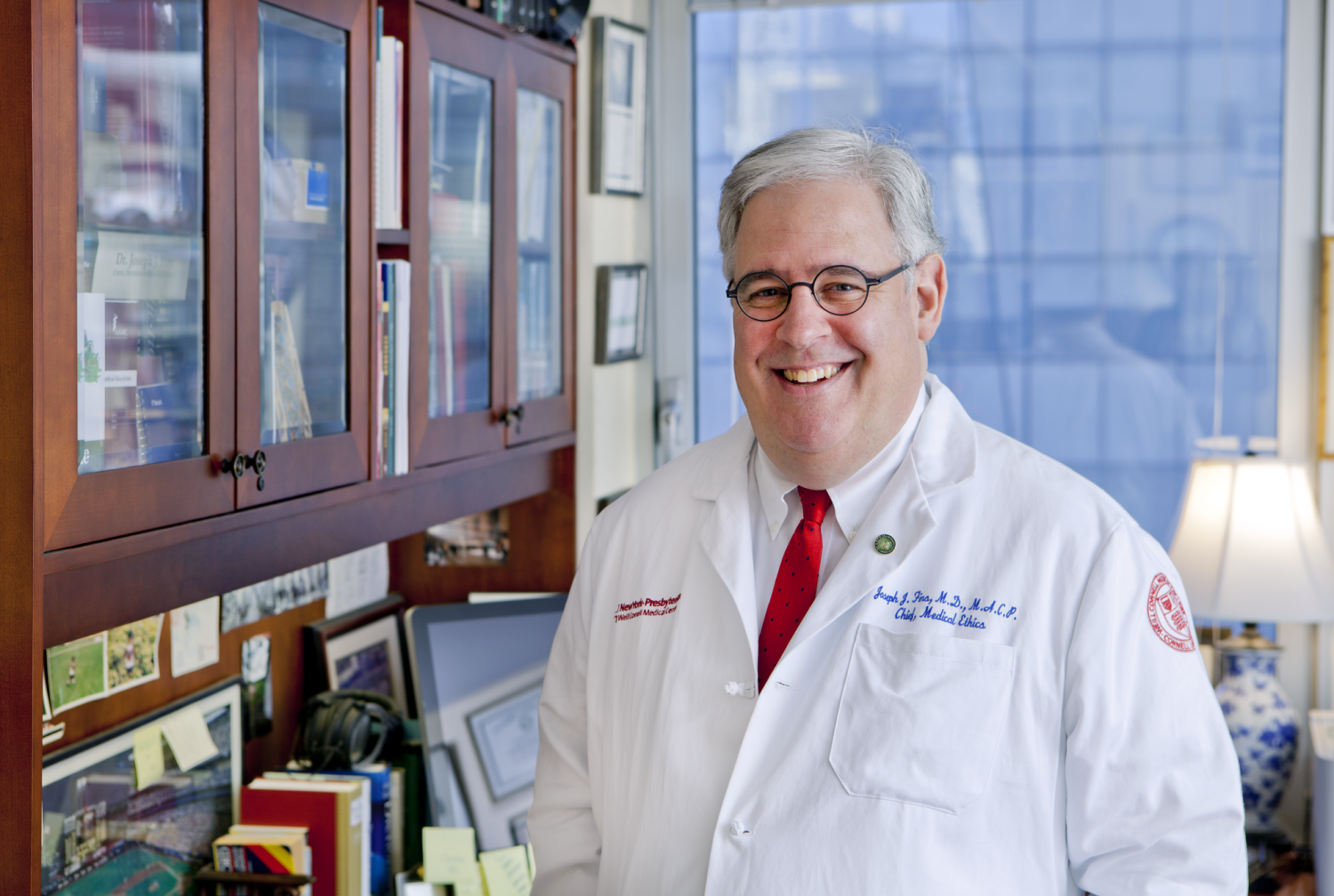 NEW YORK (April 17, 2012) — Sanford I. Weill, chairman of the Board of Overseers at Weill Cornell Medical College, and Dr. Joseph J. Fins, chief of the Division of Medical Ethics at Weill Cornell, have both been elected new fellows of the American Academy of Arts and Sciences. Academy membership is one of the most prestigious honors for excellence, extraordinary achievements and leadership in mathematical and physical sciences, biological sciences, social sciences, humanities and the arts, and public affairs, business and administration.

The Academy's announcement naming the 220 new fellows was made on April 17. Mr. Weill and Dr. Fins will be inducted into the Academy's 232nd class during a ceremony at its headquarters in Cambridge, Massachusetts on October 6, 2012.

"I am delighted to welcome Sandy and Joe as Fellow members of the American Academy of Arts and Sciences," says Dr. Laurie H. Glimcher, the Stephen and Suzanne Weiss Dean of Weill Cornell Medical College and fellow member of the American Academy of Arts and Sciences. "Their induction marks another milestone for Weill Cornell Medical College — this illustrious society welcomed our President David Skorton last year. Sandy and Joe join the Academy's influential thought leaders in medicine, science, politics and business as well as the arts. Their perspective and contributions will be invaluable at this watershed moment in the ethics and economics of health care."

"Time and again, we celebrate for good reason Sandy's generosity of leadership and of support. In welcoming him into the American Academy of Arts and Sciences, this time, we applaud his indefatigable spirit and we honor his prodigious intellect," says Dr. David J. Skorton, president of Cornell University, professor of medicine and medicine in pediatrics at Weill Cornell Medical College and professor of biomedical engineering in the College of Engineering. "Also, it is an enormous honor and pleasure to welcome my colleague and friend, Joe Fins, to the American Academy of Arts and Sciences who will be a major asset to this organization and will further its important and timely work." Last year, Dr. Skorton was elected a new fellow of the Academy.

The Academy recognizes Mr. Weill for his contributions as an influential business leader in finance and his philanthropic work. Mr. Weill is the Chairman Emeritus of Citigroup Inc. He retired as CEO of Citigroup in October 2003, and served as Chairman until April 2006. He has had a long-time business career leading several major companies and serving on several boards of directors.

Mr. Weill, chairman of the Board of Overseers at Weill Cornell Medical College, joined the board in 1982 becoming chair in 1995. Also, as a Trustee Emeritus of Cornell University, Mr. Weill serves on the Advisory Council of its Johnson Graduate School of Management. He is also a member of the Board of Trustees of NewYork-Presbyterian Hospital and an Overseer of Memorial Sloan-Kettering Cancer Center. A graduate of Cornell University, Mr. Weill is also a generous philanthropist. He and his wife, Joan, have donated more than $800 million to organizations, including Weill Cornell Medical College; Memorial Sloan-Kettering Cancer Center; Sidra, a teaching hospital to be completed in Doha, Qatar, in 2012; and Weill Bugando Medical Centre in Tanzania, one of Africa's top physician training programs.

The Academy also recognizes the professional achievements and leadership in the field of public health of Dr. Fins, The E. William Davis Jr., M.D. Professor of Medical Ethics, professor of Medicine, Public Health and of Medicine in Psychiatry. As a leading expert on medical ethics and health policy, Dr. Fins has authored more than 200 publications and several books. His research has closely examined the ethical and policy issues surrounding brain injury and disorders of consciousness, palliative care, research ethics in neurology and psychiatry, medical education and methods of ethics case consultation. He is co-author of the landmark 2007 Nature paper describing the first use of deep brain stimulation in the minimally conscious state, developing the ethical framework for this work. His forthcoming book, Rights Come to Mind: Brain Injury, Ethics & The Struggle for Consciousness, is under contract with The Cambridge University Press and expected to be published in early 2013.

The Academy of Arts and Sciences, founded in 1780, is one of the nation's oldest and most prestigious societies. It has elected the world's most accomplished leaders from the fields of science, social science, the humanities and the arts, public affairs and journalism, business leaders, leaders in educational, cultural and philanthropic organizations. It is a leading center for independent policy research studies about complex and emerging problems.

For a complete list of the new 220 members of the Academy of Arts and Sciences, visit: http://www.amacad.org/news/alphalist2012.pdf.

About Sanford I. Weill

Sanford I. Weill is Chairman Emeritus of Citigroup Inc. Mr. Weill retired as CEO of Citigroup on October 1, 2003, and served as Chairman until April 18, 2006. Mr. Weill, who had been Chairman and CEO of Travelers, became Chairman of its predecessor, Commercial Credit Company, in 1986, successfully leading the company through a public stock offering by its then-parent, Control Data Corporation. Commercial Credit acquired Primerica Corporation in 1988 and adopted its name until 1993, when Primerica acquired The Travelers Corporation and adopted the Travelers Group name. In 1997, the company acquired Salomon Inc. and combined it with its Smith Barney unit to form the global securities and investment firm, Salomon Smith Barney.

Prior to 1986, Mr. Weill had been President of American Express Company and Chairman and Chief Executive Officer of its Fireman's Fund Insurance Company subsidiary. His affiliation with American Express began in 1981 when the company acquired Shearson Loeb Rhoades. Shearson's origins date back to 1960 when Mr. Weill and three partners co-founded its predecessor, Carter, Berlind, Potoma & Weill. He served as the firm's Chairman from 1965 to 1984, a period in which it completed over 15 acquisitions to become the country's second largest securities brokerage firm. In 1993, when Travelers Group acquired Shearson Lehman Brothers' retail brokerage and asset management businesses, he was reunited with the firm he founded.

Mr. Weill became a Director of the Federal Reserve Bank of New York in 2001 and served in this capacity until December 31, 2006. He also served as a Director on the Boards of United Technologies Corp. from 1999 to 2003, AT&T Corp. from 1998 to 2002, and E. I. Du Pont Nemours and Company from 1998 to 2001. Mr. Weill is a former Vice Chairman of The Business Council and served on the Working Group on Child Care, headed by then U.S. Secretary of the Treasury Robert E. Rubin. In 1998, Mr. Weill was the recipient of Financial World Magazine's CEO of the Year Award and received the same honor from Chief Executive Magazine in 2002. The EastWest Institute awarded Mr. Weill their distinguished Corporate Leadership Award in December 2005 at an event in London with Prime Minister Tony Blair. Mr. Weill is a lifetime member of the Council on Foreign Relations; Director of Koç Holding, headquartered in Turkey; and a member of the Board of Advisors of the Baker Institute at Rice University.

President Bush asked Mr. Weill, along with four other private sector business leaders, to lead a nationwide effort to encourage private donations for relief and reconstruction in response to the South Asia earthquake that occurred on October 8, 2005. Working with the Committee Encouraging Corporate Philanthropy, a nonprofit forum of CEOs and Chairpersons, to which Mr. Weill was named Chairman of the Board in July 2004 and is now Honorary Chairman, Mr. Weill and the business leaders quickly established the South Asia Earthquake Relief Fund. Through the efforts of Mr. Weill and the business leaders, the private sector raised over $116 million in cash and in-kind services to help the earthquake victims.

The 1997 recipient of the New York State Governor's Art Award, Mr. Weill has been Chairman of the Board of Trustees of Carnegie Hall since 1991. Mr. Weill is also a Director of the Lang Lang International Music Foundation and Chairman of the Green Music Center Board of Advisors at Sonoma State University in California. He is Board Governor of the San Francisco Symphony and a Member of the University of California, San Francisco Medical Center Executive Council.

Mr. Weill is Chairman of the Board of Overseers of Weill Cornell Medical College and Weill Cornell Graduate School of Medical Sciences, having joined the board in 1982 and becoming chair in 1995. Mr. Weill also serves on the Board of Governors of Sidra, a 380-bed Specialty Teaching Hospital that will be completed in 2012 in Qatar. A Trustee Emeritus of Cornell University as well as the recipient of the school's first Entrepreneur of the Year Award in 1984, Mr. Weill serves on the Advisory Council of its Johnson Graduate School of Management. In addition, he is a Trustee of NewYork-Presbyterian Hospital and an Overseer of Memorial Sloan-Kettering Cancer Center.

Long a proponent of education, Mr. Weill instituted a joint program with the New York City Board of Education in 1980 that created the Academy of Finance, which trains high school students for careers in financial services. He also serves as Founder and Chairman of the National Academy Foundation (NAF), which oversees more than 50,000 students in 500 career-themed Academies of Finance, Hospitality and Tourism, Information Technology and Engineering. Mr. Weill has received honorary degrees from Howard University, Hofstra University, University of New Haven, and The New School.

The Real Deal: My Life in Business and Philanthropy, Mr. Weill's book, is a New York Times and Wall Street Journal best seller. A longtime friend of President Gerald R. Ford's, Mr. Weill was an Honorary Pallbearer at the late President's State Funeral and is a Trustee of the Gerald R. Ford Foundation. Mr. and Mrs. Weill are recipients of the 2009 Carnegie Medal of Philanthropy Award.

Mr. Weill, who was born on March 16, 1933, is a graduate of Cornell University. He and Joan have been married for 56 years. They have two children and four grandchildren.

A recipient of a Robert Wood Johnson Foundation Investigator Award in Health Policy Research, Dr. Fins has also received a Soros Open Society Institute Project on Death in America Faculty Scholars Award, a Woodrow Wilson National Fellowship Foundation Visiting Fellowship and support from the Dana and Buster Foundations. He was appointed by President Clinton to The White House Commission on Complementary and Alternative Medicine Policy and currently serves on The New York State Task Force on Life and the Law by gubernatorial appointment.

His most recent book is A Palliative Ethic of Care: Clinical Wisdom at Life's End (Jones and Bartlett, 2006). Dr. Fins is President of the American Society for Bioethics and Humanities and a Fellow and former Governor of the American College of Physicians. He serves as a member of the Hastings Center Board of Trustees and chairs its Fellows Council and has served as a trustee of Wesleyan University.