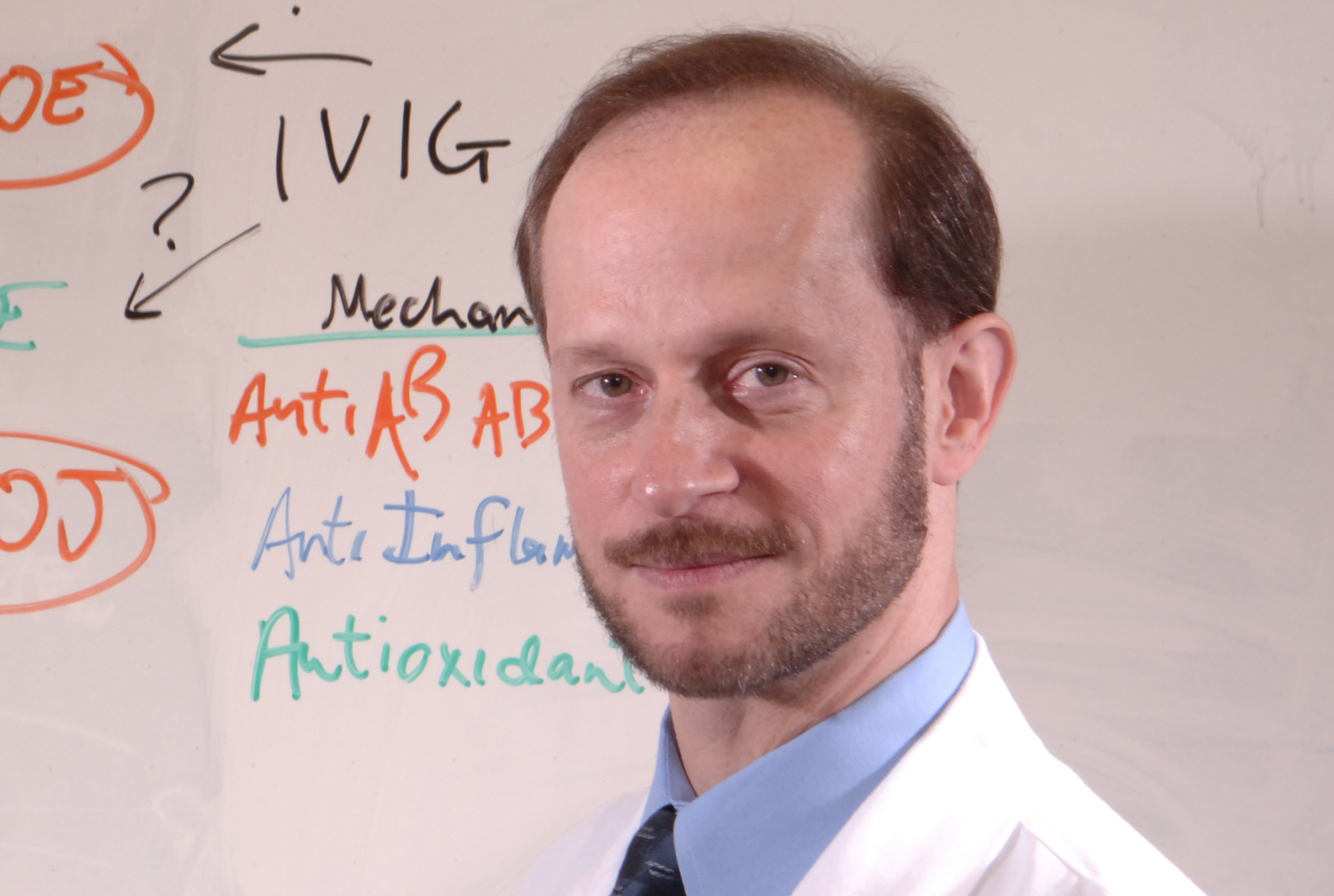 NEW YORK (December 19, 2006) — Weill Cornell Medical College has announced today a vital gift of $15 million from Helen and Robert Appel to establish the Appel Institute for Alzheimer's Research at the Medical College. The Appel Institute will be a world-class center for research and will bring novel and cross-disciplinary approaches to the study of Alzheimer's disease and other neurodegenerative conditions.

By bringing together the world's brightest research minds in the fields of neurology, neurogenetics, biochemistry and microbiology, the Appel Institute will foster a better understanding of Alzheimer's for the purpose of developing treatments — and eventually a cure — for the debilitating disease.

The $15 million donation, which is part of the Medical College's recently announced $1.3 billion Discoveries That Make a Difference research campaign, will fund development of Institute facilities inside Weill Cornell's 350,000-square-foot Biomedical Research Building, construction of which is scheduled to begin in 2007. Additionally, the gift will ensure that the Appel Institute is able to attract, develop and retain the highest possible level of research talent from a variety of clinical backgrounds.

"Alzheimer's disease represents one of the most pressing health issues in the world today, and medical science still has much to learn about this condition. Fortunately, due to support from generous donors such as Helen and Robert Appel, Weill Cornell will continue to be a leader in the quest for greater knowledge of this disease," says Dr. Antonio M. Gotto Jr., Stephen and Suzanne Weiss Dean of Weill Cornell Medical College.

"It is our hope that the research conducted in this new Institute will eventually help lead to a cure for this terrible and debilitating disease," states Robert Appel, a member of the Board of Overseers of Weill Cornell Medical College and co-chair of the Discoveries That Make a Difference capital campaign. "Helen and I have witnessed the devastating effects of Alzheimer's firsthand. It is our sincere hope that this Institute will provide the resources necessary to help increase understanding of the disease and one day help find a cure."

"Helen and Robert Appel deserve tremendous accolades for this momentous gift," says chairman of Weill Cornell's Board of Overseers Sanford Weill. "Building on the world-renowned research capabilities of Weill Cornell and Cornell University, the Appel Institute will advance the conversation to the next chapter of research for neurodegenerative diseases and neurological disorders. The impact from the discoveries uncovered within the Institute's walls will forever change the way we diagnose, treat and eventually cure Alzheimer's."

Weill Cornell has a rich history of collaboration, on which the Appel Institute is built. Often, this synergy is realized in the form of cutting-edge collaborations with faculty partners from Cornell University's Ithaca campus.

Just last week, a collaborative research team — led by Dr. Norman Relkin, associate professor of clinical neurology and neuroscience at Weill Cornell Medical College and director of the Memory Disorders Program at NewYork-Presbyterian Hospital/Weill Cornell Medical Center, and Dr. Kelvin Lee, the Samuel C. and Nancy M. Fleming Professor of Molecular and Cell Biology and associate professor of chemical and biomolecular engineering at Cornell University — discovered a panel of 23 protein biomarkers in cerebrospinal fluid that acts as a neurochemical "fingerprint." This landmark discovery could be the basis of the first definitive test for Alzheimer's disease.

"Alzheimer's is a growing epidemic that demands the level of attention that the Institute will provide," observes Dr. M. Flint Beal, chairman of the Department of Neurology and Neuroscience at Weill Cornell Medical College and Neurologist-in-Chief at NewYork-Presbyterian/Weill Cornell. "Resources such as the Appel Institute are absolutely essential in order for medical science to close the existing research gap."

"By employing an interdisciplinary approach to the study of this condition, researchers at the Appel Institute will be able to obtain groundbreaking insights into the physiology of the disease," says Dr. David Hajjar, vice provost and dean, Weill Cornell Graduate School of Medical Sciences. "Instead of simply following existing clinical protocols, these diverse research collaborations will offer a 360 degree view of Alzheimer's — hopefully exposing its cause and eventually its cure."

Robert J. Appel has been a member of Weill Cornell Medical College's Board of Overseers since 2004. This year, he was named chairman of the Discoveries That Make a Difference capital campaign. The Appels have endowed the Robert J. Appel Professorship in Molecular and Cell Biology as well as the Helen and Robert Appel Clinical Scholar (Lipids) at Weill Cornell Medical College.

Mr. Appel graduated from Cornell University's College of Arts and Sciences in 1953 and received his M.B.A. from Wharton School of Business in 1955. After three years with Arthur Anderson & Co. as a CPA, he joined Wertheim & Company as a Research Analyst. In 1970, he moved to Neuberger Berman, a New York investment and securities brokerage firm, as Investment Manager, then Executive Partner. He was Managing Director of the firm when it was acquired by Lehman Brothers in 2003. He then founded Appel Associates, a family investment firm, and serves as its President.

He serves as a trustee and treasurer of the Levitt Foundation, a trustee of the Manhattan Institute for Policy Research, and a director of the 92nd Street YMHA in New York City. In addition, he serves on the board of directors of Ampco-Pittsburgh Corporation.

Mr. Appel is married to the former Helen L. Harrison, who also graduated from Cornell's College of Arts and Sciences in 1955, and received her M.A. in History from Long Island University in 1978. She is a former high school teacher and is an avid historian. For more than 20 years, she has taught world and American history in an adult-education program at Cumberland School in the Great Neck, N.Y., school system. Mrs. Appel is a member of the Cornell University Council, and the Arts and Sciences Advisory Council. She also serves on the board of the Parker Geriatric Institute on Long Island.

Robert Appel is a University trustee emeritus since 2004. Long active in Cornell University matters, both Robert and Helen Appel were named foremost benefactors by the University's Board of Trustees in 1991.

The Appels have two daughters and four grandchildren.

About The Campaign for Weill Cornell Medical College: Discoveries That Make a Difference

The Weill Cornell Medical College Discoveries That Make a Difference campaign will raise an unprecedented $1.3 billion in private philanthropy to pioneer paradigm-shifting initiatives in biomedical research, medical education and patient care to advance global health and well-being. The campaign will support a bold strategic plan, leveraging the Medical College's extensive partnerships and resources to fund programs such as the construction of a new Biomedical Research Building, as well as the introduction of new translational and clinical research programs.

The new $650 million, 350,000-square-foot Biomedical Research Building will double Weill Cornell's existing research space, accommodating more laboratories and scientists to accelerate biomedical discoveries. The building will be designed with laboratories in an open layout to foster communication and collaboration among scientists. The location, adjacent to Weill Cornell's new Ambulatory Care and Medical Education Building, will create synergies to foster translational research. This will be the first new research facility built on campus in two decades and will help keep New York City in the forefront as a center for biomedical research.

New translational and clinical research programs will be focused on cancer, cardiovascular and neurodegenerative diseases, diabetes and metabolic disorders, global health and infectious disease, illnesses of children, and research methodologies such as stem cells and developmental biology. The goal is to translate the benefits of research advances immediately to patients, supporting Weill Cornell's mission to provide the highest standards of patient care. Patients will reap the benefits of research through less invasive procedures, reduced morbidity, shorter hospital stays and speedier recovery times.

The Joan and Sanford I. Weill Medical College of Cornell University — located in New York City — is committed to excellence in research, teaching, patient care and the advancement of the art and science of medicine.

The Medical College, which is a principal academic affiliate of NewYork-Presbyterian Hospital, offers an innovative curriculum that integrates the teaching of basic and clinical sciences, problem-based learning, office-based preceptorships, and primary care and doctoring courses. Physicians and scientists of Weill Cornell Medical College are engaged in cutting-edge research in such areas as stem cells, genetics and gene therapy, geriatrics, neuroscience, structural biology, cardiovascular medicine, AIDS, obesity, cancer and psychiatry — and continue to delve ever deeper into the molecular basis of disease in an effort to unlock the mysteries behind the human body and the malfunctions that result in serious medical disorders.

Weill Cornell Medical College is the birthplace of many medical advances — from the development of the Pap test for cervical cancer to the synthesis of penicillin, the first successful embryo-biopsy pregnancy and birth in the U.S., and most recently, the world's first clinical trial for gene therapy for Parkinson's disease. Weill Cornell's Physician Organization includes 650 clinical faculty, who provide the highest quality of care to their patients.
Office of Public Affairs
pr@nyp.org